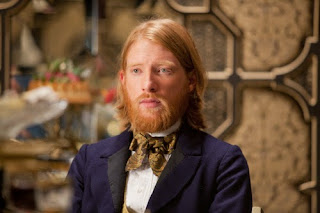 I get a kick out of creating lists about why my favourite heroes deserve our love, and this man became super special to me. It's Konstantin Dmitrievitch Levin from 'Anna Karenina.' Perhaps it's because he does far more than just make us admire him, but provides hard-earned tools we can take on board for living a good, meaningful life. He's definitely my main reason for persevering with the book, and here are my reasons why.

1) He tones down his idealistic tendency.
It's presented as one of Levin's major faults, if you can call building lofty standards in your mind a fault. Reality always falls short for Levin, as it does for many of us dreamers. He idealises his notion of the model family, his impression of Kitty Scherbatsky as the perfect woman, and his concept of the ultimate working environment for land-owners and peasants alike. Castles in the air tend to hurtle to the ground, but Levin handles disillusionments well. Instead of griping when things don't meet his expectations, he chooses to flow with what he gets. He decides in effect, 'I thought I'd prefer A, but B is turning out to be pretty good too.' Levin comes to see that the life he gets isn't necessarily inferior to the life he thought he wanted. It's just different. And it even contains its share of happy surprises that take him off guard. A good example is his reaction when Kitty cares so much about things which don't interest him in the least, such as home decor, and when she sees fit to argue with him about things he wouldn't normally waste his breath on. She's annoying, but also sort of charming. (See here for my article about Kitty and Dolly, and why they make the book so memorable too.)

2) He proves that a quiet life can be extremely full. 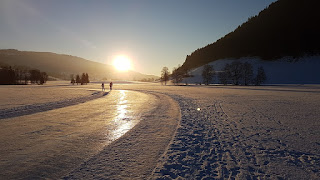 Whenever Tolstoy chooses to show the beauty of pastoral Russia, Konstantin Levin is bound to be in the scene. He brings the appeal of a quiet country life alive for us. After reading long sections about the two-faced, hedonistic, fashionable lifestyles of other characters, we need a frequent Levin break. His closeness to nature always comes as a breath of fresh air. Immersing himself in the great outdoors always makes him happy, and his dealings with the peasants often have a lyrical, 'Fiddler on the Roof' sort of feeling about them. It's a great balance for the rest of the book.

3) He doesn't let others stop him being happy in his own way.
Levin loves the physical challenge of mowing his own property, although he knows he's being laughed at by all around him. The peasants sneer because other landowners never bother, and his own class sure aren't into getting up close and personal with the land. But our boy decides to ignore what both sides say, simply because he enjoys mowing. He doesn't have to do it but he really wants to. And having fun is a good enough reason to do something productive. Those who follow their own hearts don't have to waste energy keeping up an act. Even his condescending older brother Sergey can't help admiring Kostya for his action. 'He was disinclined to be parted from his brother, who seemed positively beaming out freshness and energy.' Yeah, we get it through the page, Sergey, and I hate to be parted from him too!

4) He's good with kids.
It's presented as the sign of a very decent bloke. Stiva and Dolly's children, who don't know Levin all that well at the start, respond to his lack of hypocrisy, which sets him apart from other adults in their estimation.

5) He gives us some of the best romantic moments in literature.
This is a big claim, because I've read my fair share of classics and other literature. Other readers of this book will remember Levin's cryptic second marriage proposal to Kitty, which she figures out with very sparse clues, but that's not all I'm thinking of. Before that, there's the moment when Levin is walking along in the dawn, set on the idea of living with the peasants, when he suddenly spots Kitty through a coach window. One glance at the girl who rejected him convinces him to drop the peasant notion, because 'there are no other eyes like those in the world.' I was jotting little hearts all over my notes <3

6) He has an unflagging craving to be a better man.
It's an extension of my first point. Nobody can be as idealistic as Kostya Levin without feeling that they personally don't measure up. It's obvious early on that self-esteem is not his strong point. He compares himself with the impressive achievements of his peers and rates himself 'a fellow with no ability, doing what according to the eyes of the world is done by people fit for nothing else.' When Kitty rejects his proposal he's not surprised, because all along he'd wondered what could possibly give him the nerve to think she'd ever accept him. I had a feeling he'd have to come to some sort of peace with the idea that he had nothing going for him, and kept looking forward to finding out how he'd come to it.

Furthermore, I started off with the mistaken notion that he's stodgy and plain, and imagined him that way, because it was how he chose to think of himself. Yet I stood corrected when I saw him through the eyes of other characters, such as Kitty and Dolly. To them, he's actually quite handsome, charming and attractive. OK, so now I'm with it.

7) His feelings about bureaucratic red tape ring true.
We are all forced to jump through bureaucratic hoops, but Levin's way of expressing the frustration makes me grin. He considers it, 'a feeling of misery akin to the helplessness one feels in dreams when one tries to use physical force.' Also, he can't figure out whose interest it is to keep stuffing him up and causing the roadblocks. If he could understand why they exist he'd find it easier to be patient, but nobody can even explain why the hitches were ever created. Yep, I've been there.

8) He's a true introvert.
This one may appeal mostly to those of us who can relate to him. I'm definitely on his page. Small talk drains him and intense social focus exerts a great weariness on his spirit. The challenge to take things in directly as they happen is taxing on his attention span, and he could really benefit from the chance to step back and process it all. But social events aren't designed to let us do that. The mental fatigue of trying to behave like the more extroverted personalities all day sometimes causes him to say inane things he later regrets. And at one point, he feels a flash of disappointment to see that the people he's socially obligated to call on are at home, as he'd hoped they'd be out. Now all he can do is try to figure out the social cues to disappear as soon as he can. Gotta love him.

9) His final epiphany gives us permission to be ourselves.
Konstantin realises he's been over-thinking far too much, for far too long. When he simply lives his life and immerses himself in his daily routine, he's happy enough. But he comes unstuck whenever he starts agonising over the meaning and value of his own life. His realisation at the end of the story stikes a double blow, at both his low self-esteem and the agnosticism he's been struggling with. He's been straining his brain to understand something which can really only be accepted by faith. God's got it all sorted and we haven't. There's a point where human struggles to delve into the deepest mysteries bring us up against a brick wall, because faith and reasoning are totally different from each other. Letting go of a need for a rational explanation for belief in God's presence and our own worth is a vast relief for him, freeing him up to enjoy his family, work on the land, and dealings with his workers, without the angst of feeling obliged to justify it all. I love how Kostya himself chooses to put it. 'I've been living right, but thinking wrong.' It's an excellent loophole for those of us who've been sucked into the trap of doing similar things.