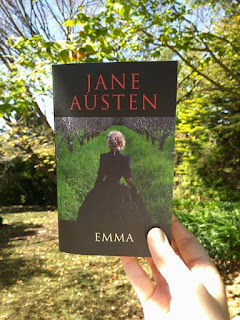 Beautiful, clever, rich - and single - Emma Woodhouse is perfectly content with her life and sees no need for either love or marriage. Nothing, however, delights her more than interfering in the romantic lives of others. But when she ignores the warnings of her good friend Mr. Knightley and attempts to arrange a suitable match for her protegee Harriet Smith, her carefully laid plans soon unravel and have consequences that she never expected. With its imperfect but charming heroine and its witty and subtle exploration of relationships, Emma is often seen as Jane Austen's most flawless work.

MY THOUGHTS:
This is a classic with a single word title, and my choice for that category in the 2018 Back to the Classics Challenge.. Great classics don't always have a lighthearted nature, so it's a bonus when they do. This story is all about matchmaking. The title character thinks she has enough insight to decide who would be perfect together, and considers it an excellent personal hobby to promote their happiness. But from her lofty, know-it-all stance, Emma fails to take into account that they may be keeping their own agendas, blind spots and secret lives concealed from her. It makes for a comedy of awkward mix-ups, a bit like Shakespeare's 'A Midsummer Night's Dream.'

Jane Austen needed a range of complex characters to carry it off, all living deeper lives than Emma sees on the surface. The execution is great, because Austen was always master of the whole spectrum. The reader is hoodwinked too, although when all is revealed, we can turn back and see that she did leave a trail of clues. The characters were all brilliant creations so I'll focus on them, although I'll leave Emma herself for a separate discussion. There's just too much to say about this main character to squeeze in here. (Here is my update: Why do we love such a snob?)

I think this novel has some of Jane Austen's coolest men, who stand out for either their goodness or badness. There's Mr Weston, a male Pollyanna, always latching onto the brightest way of regarding setbacks. His antithesis is Emma's dour brother-in-law, John Knightley, who can be counted on to deliver some cynical comment. I really like John, which is a bit of a worry, since they say it takes one to know one. Worst of all is Mr Elton, the oily-tongued flatterer who carefully crafts his behaviour to look after himself. And then there's Mr Weston's tricky son, Frank Churchill, the hot young stud who may accidentally trample over a few ladies' hearts in his effort to keep his own secret. But the overall hero is the novel's voice of wisdom and integrity, Mr George Knightley, the only man who will ever admit to seeing faults in Emma. In fact, he's usually right about everything. While other characters are blinded by the fog of their mistaken hopes and assumptions, Mr Knightley sees so clearly, he's like the Sherlock Holmes of romance.

The females are great too and one who fascinated me is Harriet Smith, the sort of girl to be swayed by the first busy-body who claims to know what's best. She is always looking for cues from others as to how to think and behave. She's so indecisive, she can't even say which address to have her packet of ribbons delivered to. I got mad at one point, when Mr Knightley said that a blank slate like Harriet needed a good man like Robert Martin to shape her opinions. No, come on George, she needs encouragement to think for herself, not a boss to tell her what to do! It was a relief later on, when he decides he'd been too hasty to judge Harriet as totally devoid of character. Hopefully the end of her story, when she accepts something as huge as a marriage proposal off her own bat, is the beginning of a stronger, more confident young woman.

Even characters we rarely encounter on the page in person come across more 'real' than many characters from other authors who get heaps of exposure. I'm thinking of the modest and sensible Robert Martin, who does a great service for young farmers without having to say a word. Through him, Austen is telling her readers not to make snappy judgments about an entire class of people. I liked him so much, I wanted to see more of him on the pages. At the other end of the spectrum is the autocratic Mrs Churchill, who uses her position at the top of the social ladder to fill others' lives with misery. We never see either of them, but they're still large as life.

The thought of that lady begs the question, 'Who is the biggest tyrant?' Mrs Churchill or Mr Woodhouse? They are obviously opposite in personality. One is bossy and selfish while the other is caring and loving. But their impact is similar. Mrs Churchill keeps her 23-year-old nephew on a ridiculously short leash, but Mr Woodhouse does the same to virtually everyone he knows, although his intention is different. His misguided sense of fear and protection means that his guests have delicious food pulled from beneath their noses, people must give up pleasure trips to keep him company, and Mr Knightley feels forced to move out of his own magnificent house, because he knows there's no other way he'll be free to marry Emma while the inflexible old worrywort lives. That's one of Jane Austen's incidental lessons. Control freaks come in all shapes and sizes, and don't have to be malicious to fit the bill.

Another thing I love is the treasure trove of clever dialogue. There's nothing quite like the wit and excellent points made in fictional conversations, where the author has had time to sit down and fine tune them, to give the illusion they're completely spontaneous. Here are my favourite three.

1) Emma and Harriet discuss the possibilities open to an unmarried woman of means. (It was so convincing, it was almost a shame Emma did get married. What a powerful role model in busting stigma she could have been.)
2) Emma and Mr Knightley debate the character and duties of a true man.
3) Emma speculates with Frank Churchill over the anonymous giver of Jane Fairfax's piano.

This time round, I love the frequent revelations that the small things in life are really the big things. Gifts to Mrs and Miss Bates of hog meat from Hartfield and apples from Donwell Abbey really help them to make ends meet. No wonder they are so greatly appreciated. These acts of kindness are not just the fiddly extras it may be tempting to read over, but the whole fabric of life. The reason why they get such prominence in the novel is because they deserve to. The ending delivers the perfect mix of working out exactly as many readers hope (it is a romance after all), and delivering some super surprises, which turn out to be true to character after all. Never assume you can predict the inner lives of anyone :)

Now, do stay tuned for my musings about Emma's character, coming soon.