'By the Shores of Silver Lake' by Laura Ingalls Wilder 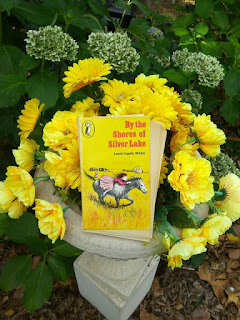 This year, I'm hosting a read-along of all of the Little House on the Prairie Books by Laura Ingalls Wilder, which you'll find here. We'd love you to read along and share your thoughts, if you feel so inclined. I haven't included a sign-up sheet of any sort, but kept it all very informal. Here we're up to the month of May. And you can see by the state of my old book cover, that it was very well loved. There's not a single page still intact.
*    *    *

The Ingalls family leaves Plum Creek.
Pa heads west to the unsettled wilderness of the Dakota Territory. When Ma, Laura, Mary, Carrie, and Grace join him, they become the first settlers in the town of DeSmet. And Pa begins work on the first building in what will soon be a brand-new town on the shores of Silver Lake.

MY THOUGHTS:
The story picks up four or five years after the events of On the Banks of Plum Creek. New developments include the addition to the family of little Grace. But there's only been a couple of measly wheat crops since the grasshoppers decimated everything. And a bout of scarlet fever has swept through, making Mary blind. It's one of the saddest events of the series. As a kid I kept waiting for her sight to return, then realised it wasn't going to happen.

At the start, Pa's sister Docia arrives one evening and invites him to join her new family out west. She offers him the job of accountant and store keeper for a railroad camp. Best of all, the government is offering homesteads to settlers eager to travel, so he convinces Ma that it's their newest providential opportunity. The land is huge and wild, just the way Pa and Laura like it. So they're up and off again, and Ma and the girls get the chance to catch the train out there; an experience they find mildly terrifying.

I feel we get a bit of insight into why Laura was such a perceptive writer, with the skill to bring the most tiny, colourful nuances to life. It was surely because of her faithful promise to be eyes for Mary all those years ago. She was able to hone in on subtleties other authors might miss because she was used to it. Way back in her teens she'd trained herself to pay specific attention to detail until it became second nature, and put it to use again writing books. Wow, nothing is ever wasted. Pa meant it to be just for Mary, but Laura's talent blessed so many more. Mary said, 'You paint pictures when you talk, Laura.' She does when she writes too.

Those two sisters were always totally separate people who processed things differently, so there was bound to be communication misunderstandings. Mary was a realist who thought in terms of clear fact, while Laura had a more fanciful imagination and way of expressing herself. 'We should always say exactly what we mean,' says Mary. This frustrates Laura, who tries hard to put optical illusions and poetic insights into metaphors. To us, it all goes to show that there is more than one way of expressing truth.

Pa was a great dad who treated each of his four daughters differently, and I get the impression that Laura was closest to the son he didn't have. They shared the same restless streak, making them kindred spirits, always wanting to explore, keep moving, and just soak in the wonder of creation. It makes his bond with his daughter 'Half-Pint' or 'Flutterbudget' very special. Similarly, I sense that Ma and Mary were the ones on the same wavelenth. It happens in families. 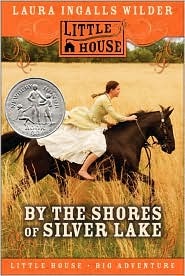 What a contradiction Laura must have seemed to her mother and sisters, in what she chose to love and fear. She was bold when it came to nature and animals. She says she was so scared to ride the wild, bareback pony at the railroad camp that she 'just had to try it.' Yet a crowd of strangers was enough to suck away all her courage. (She did not feel alone and happy on the prairie now. She felt lonely and scared. The town's being there made all the difference.) To me, Laura has nailed the huge difference between being 'alone' and 'lonely.' It's the same solitude, but a person's preference and character makes it far more than just semantics. One is liberating and the other horrible. I can imagine how puzzled Ma and Mary must have been though. ('I declare Laura, sometimes I don't know what gets into you.')

The story drew me in just like the others, because it's like an invitation to visit simpler times. I love our internet era, but singing and dancing to Pa's fiddle sounds like an awesome substitute. And it's fun to imagine all the sewing, knitting and textile projects secreted away prior to Christmas. We're introduced to jolly Mr Boast and his young wife, who lends Ma and the girls a stack of serialised magazines, so now they can branch out from their one copy of Millbank. (See On the Banks of Plum Creek.)

Reverend Alden from Plum Creek shows up too, and offers the family another precious gift in the form of a new goal. He tells them about a college for the blind in Iowa, and everyone starts imagining how brilliant it would be for Mary to attend. It's obvious by now that the Ingalls' never have any spare cash, but one of their favourite sayings is, 'Where there's a will, there's a way.' If they manage to pull it off, it'll be another case of what Pa and Laura discuss the afternoon they watch the railroad being built. Before anything becomes real, it starts off as a desire in somebody's mind. He says, 'If enough people think of a thing and work at it, I guess it's pretty nearly bound to happen, wind and weather permitting.' So if anyone can make Mary's new dream come true, her family can collectively. But it'll be a long, hard road.

Of course it wouldn't be a Little House book without the occasional dash of danger, which the Ingalls family just manage to slip out of. Pa's payroll job almost makes him the victim of a potential riot. And there's the time Laura and Carrie skate straight up to the front door of a wolf den at night, like a fast food delivery. I love Pa's characteristic reaction when they arrive home puffing. 'It's too late to be scared now.'

Toward the end we glimpse a couple of familiar faces from Farmer Boy, all grown up. It's the Wilder brothers, and Almanzo's dream of owning flash, pedigree horses has come true. Pa says they're the finest horses in the country, as they watch the boys ride past. At this stage, Laura is more interested in the beautiful matched horses than the cute guys in the wagon :) Suddenly, poor old Sam and David, their Christmas horses from Plum Creek, no longer seem to cut it for her.

I love her description of a town mushrooming up where there wasn't one before, transforming the whole character of the landscape and quality of the silence practically overnight. What a gem these books must be for the people who live in twenty-first century De Smet. What crazy times they were, when crowds of men turned up to take advantage of the land offer. And although it didn't wring a tear out of me when I was young, this time round I was crying about good old Jack's passing to the Happy Hunting Grounds, where Pa says all good dogs go. Their faithful old friend represents the steady passage of time, and it really touched my heart.

Now I'm looking forward to getting stuck into next month's continuation, The Long Winter.