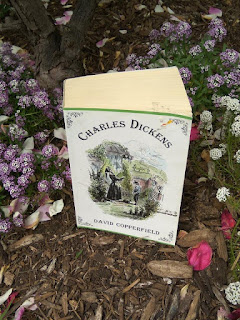 David Copperfield is the story of a young man’s adventures on his journey from an unhappy & impoverished childhood to the discovery of his vocation as a successful novelist. Among the gloriously vivid cast of characters he encounters are his tyrannical stepfather, Mr Murdstone; his formidable aunt, Betsey Trotwood; the eternally humble yet treacherous Uriah Heep; frivolous, enchanting Dora; & the magnificently impecunious Micawber, one of literature’s great comic creations.
In David Copperfield—the novel he described as his “favorite child”—Dickens drew revealingly on his own experiences to create one of his most exuberant & enduringly popular works, filled with tragedy & comedy in equal measure.Originally published as a monthly serial, from 4/1849 to 11/1850.

MY THOUGHTS:
This is my choice for the 19th Century Classic category of the Back to the Classics Challenge, 2018. Warning: There are mild spoilers, but old classics are fair game.

I've read a few other Dickens novels, but this mammoth always slid beneath my radar. I discovered that of all he'd ever written, Dickens called it his 'favourite child.' Whether he meant David Copperfield the book or David the character, I wanted to find out why. He seemed to be setting the challenge to see if we'd call it our favourite too. So I started without a clue of what to expect, except that David is one of Dickens' famous little orphan boys who had a very rough start. He grows up during the course of the story and becomes a celebrated fiction author, so I wonder if that autobiographical content gave it the soft spot in Dickens' heart. (Maybe their inverted initials, CD and DC are significant, and maybe not.)

It begins like a gender-reversed Cinderella story. Little Davy lives happily with his widowed mother, until she marries mean Mr Murdstone, who takes on the evil stepfather role. David's mother, Clara, is a weak-willed young girl who loves her son dearly, but lets him down. Not only does she fail to stick up for him, but even lets the bullies talk her around to their point of view.  ('They broke her like a poor caged bird, and wore her deluded life away in teaching her to sing their notes.') Eventually the poor young mother dies, and David is left at the mercy of Murdstone and his bitter, twisted sister; a terrible place for a sensitive child to be.

But David is no passive Cinderella. Rather than sitting around crying, to be later rescued by a fairy-godmother, he takes his destiny into his own hands. David has heard tales about his dead father's aunt, Miss Betsey Trotwood. She was a man-hater (with good reason) who would have taken on his support if he'd been a girl, but she was present at his birth, and stalked off in disgust when he turned out to be a boy. He knows his only chance to escape a terrible fate is to set off on his own two feet to track her down, and do his best to convince her to give him another chance. It's a brave move indeed, since there's no guarantee Miss Betsey will even let him in her door.

I love how David draws on his dead father's stash of classic novels for courage and inspiration. They save his peace of mind, and by extension, his whole life. When David makes sound decisions, he feels he has the support of his favourite fictional heroes to back him up. I doubt he would have taken action without their influence. Even when David hadn't held a novel in his hands for a long time, he'd soaked up all the exploits enough to know what true heroes do. He says, 'I was as true to them as they were to me.' What an awesome example of the power of good fiction in action. 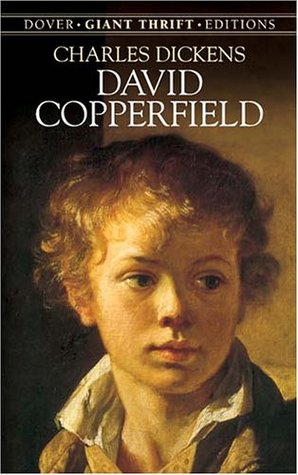 The rest of the book is about what happens to him later, as he goes to school, then starts a career. The impression that Dickens was doing some personal cathartic stuff through David makes it a fairly intense read. But although it's as thick as a brick, there are many cool breathing stops along the way. You can tell from its structure that he wrote it as a magazine serial. It's full of mini-cliffhanger moments, often at the ends of chapters. And characters we haven't seen for some time have a tendency to pop up again in the most surprising circumstances. Even though I wised up to this, it still took me by surprise several times.

I don't think it's the perfect book. I had problems with the way Dickens depicted some of the young women. They tend to be one-dimensional. Dora is the sort of beautiful blonde airhead nobody wants to be typecast as. Emily is the prototype girl prodigal, but her fall from grace didn't convince me to sympathise with her, since I was never convinced that she truly loved Steerforth, her seducer, although she said she did. My heart was more with her beloved family, Mr Peggotty and Ham, whose hearts she broke. And Agnes is such a saint and angel, I was almost blinded by beams of light from the page whenever she stepped into a scene. You almost need a warning to read her parts with sunglasses. Never once did she have a moment of human weakness, lose her cool, or do something regrettable. Dickens could craft well-rounded female characters, but I think he missed the boat with the David Copperfield girls!

In contrast, the bad boys are so complex and finely-layered, you could have a psychological field day with them. We may call them scoundrels and villains, but they are memorable ones who make the book the masterpiece it is. The more I think about them, the more they deserve to be probed individually, and even ranked, so I'll devote another whole ramble just to them. (Update, here it is; The Bad Boys of David Copperfield)

There are many supporting characters who have become legends over the years, such as the elastic Micawber family, always bouncing back from the brink of financial disaster, sometimes within a 24-hour period. There's David's good old nurse Peggotty, who was never in the position to do much for her boy, yet the tiny things make a huge difference and help shape his character. And simple-hearted Mr Dick, with his unique way of diffusing facts he doesn't need, by sending them up in the sky on the tail of a kite. Not to mention Miss Mowcher, the tiny hairdresser who teaches David not to take people on face value.

Whether or not it was planned specifically by Dickens, there are several single parent characters in this book, either natural or surrogate. We have the mothers, Mrs Copperfield, Mrs Steerforth, Mrs Heep and eventually Miss Betsey Trotwood. They tend to have boys. Then there's the fathers, Mr Wickfield, Mr Peggotty and Mr Spenlow, who interestingly seem to have girls. In each case, you can trace some direct influence from their input on the kids, for either good or bad. There is a lot of relationship material to tease out. That between David and Miss Betsey is the sweetest of all. She makes no attempt to hide the fact that she'd wished for a girl, and often refers to his 'sister Betsey Trotwood Copperfield' who never existed! You'd imagine that would be enough to give David a complex, yet it doesn't. I think it actually does the opposite, and shows him how much she comes to care for him, since it's enough to make her shove aside her strong prejudice and decide his gender doesn't matter.

But the biggest takeaway is the strength of David's character, even from childhood. 'I wondered with a sudden fear whether it is likely our good clergyman could be wrong, and Mr and Miss Murdstone right, and that all the angels in heaven can be destroying angels.' Something as quiet and personal as deciding 'NO' to this question, makes David a hero. He goes out looking for Miss Betsey, and it changes the course of his life. ''There was no hope of escape from it unless the escape was my own act.' If he hadn't done that, she definitely wouldn't have come to seek him.

This story is a big commitment. It's taken me well over a month to read and process, yet I think it's well worth the effort.