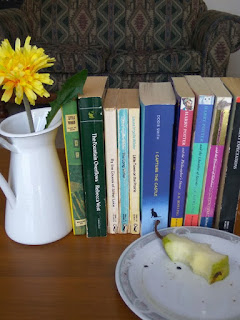 For the past 13 years or so, we've sometimes been seriously strapped for cash. That was about the time my youngest son was born, my husband became a student and I became a homeschooling mum. I've shared some of the challenging times here.

Once at the shops, I told my kids I couldn't afford something they badly wanted. I said, 'I'm not saying this to be mean. We just don't have the money.' And another lady standing nearby gave me the sort of sympathetic smile that said louder than words, 'I know what you're talking about.' Her little gesture encouraged me not to let my spirits get too low. Knowing that we're not alone helps big time.

So I've made a list of families who have struggled with poverty but kept their contentment levels reasonably high. They're not just poor families but 'jolly' poor families. It's a double meaning. Firstly, many of them lived in places and time periods that make our brand of poverty look pretty good. But also, I call them jolly because that's exactly what they were. It's my way of acknowledging their happy tendencies, and their potential to lift our own spirits. Here goes.

The four sisters begin their story one Christmas Eve, complaining how dreadful it is to be so poor they'll have no lovely presents or food the following day. Their saintly mother arrives home to set their attitudes straight, which includes donating their meager lunch to an even poorer family, for it's more blessed to give than receive. Throughout the book, Louisa May Alcott manages to convince us that their youth, energy, imagination and senses of humour are better prizes than the wealth they used to own. (It would've been nice if they'd kept that too. Especially when we discover that their beloved father lost their fortune through his 'philanthropic acts'. Reading between the lines, he invested it in foolish deals which turned bad, if we take the life of Louisa's father, Bronson Alcott as the real story.) My review is here.

Their story also takes place in the Christmas season. The father, Bob, is unlucky enough to work for grouchy tightwad Ebenezer Scrooge, who gets a glimpse of their merry festivities courtesy of the Ghost of Christmas Present. Even though the angelic youngest boy, Tiny Tim, is close to death's door, they're determined to enjoy the holiday to the utmost. This includes plenty of snarky comments about Scrooge himself, who they believe is more to be pitied than they are, despite all his dough. Little do they know, these digs hit their mark.

The Mortmain Family
They're living a life of shabby, genteel poverty in an old castle they rent. Their father, who used to be a famous author, hasn't written a word in years. Although the oldest sister Rose vows she'd sell her soul to be financially secure, Cassandra, who tells the story, has a wiser way of looking at it. She comes to see that great wealth may take the edge off the simple pleasures she enjoys so much. And through Cassandra, we see that the best things in life are indeed free. She relishes what life has to offer in a way which is wonderful to read. My review is here.

The Weasley Family
I guess having seven children kept Molly and Arthur close to the breadline. Poor Ron is always embarrassed about his shabby, homemade clothes, modest packed lunches and ramshackle house, especially when rich git Draco Malfoy rubs it in. But dear little Harry has had enough hard knocks in his short life to see that what Ron has is priceless. Even though Harry has inherited quite a fortune in the wizarding world, he wouldn't pass up school holidays at the Burrow for all the world. Neither would I, if I had the chance.

Wherever they happen to build their little houses, Pa and Ma and the girls have to struggle for every cent they earn. It's almost as if the land wants to hold back its bounty. Especially when unforeseen disasters like fires, Indian raids and grasshopper plagues strike them. And doesn't posh little Nelly Oleson criticise them, because her Pa is a storekeeper. But Laura, Mary, Carrie and Grace have Pa's good stories, his excellent fiddle playing and the great outdoors to keep them happy. Who needs more than a tin cup, a corncob doll and a candy cane at Christmas time anyway?

The Gargery Family
Pip would have done anything to change his life while he was a blacksmith's apprentice to dear old Joe. At last a secret benefactor offers him the chance to wear fancy clothes, thumb up his nose and become a 'gentleman' in London. But Pip learns through experience that what Joe and Biddy have at home in the forge is pretty special after all. There's genuine love, lack of pretension, and the satisfaction of earning a wage through honest labour. Review is here.

The Aubrey Family
The father is big with lofty, philosophical ideas but no good with money, and the mother thinks that being able to pay a bill in time is a huge achievement. Her major regret is that her children had such a hard childhood, but that's news to them. With their music practise, pretend horses, adorable little brother and in-house jokes, they've grown up feeling as fortunate as any kids could be. My review is here.

Young Francie has an affinity with the tree which grows outside her window, for it manages to thrive regardless of poor water and soil quality. Although immigrant Irish families like her own have to struggle hard in early twentieth century America, she reads her books, makes observations, learns as much as she can, and never loses her optimistic attitude.

These folk add a distinctly Australian flavour to this list. They lived in Sydney's Surrey Hills, a typical slum district, during the depression era. It seemed that once anyone made their home there, it was practically impossible to work their way out. The youngest daughter, Dolour, almost managed, with an excellent academic record, but then her eyes started playing up, so she had to quit the books. In spite of all their hardships, the Darcys kept a buoyant attitude, spurred on by their affection for each other and determination to make the best of things. During a trip to Sydney with my husband and kids, I was surprised to find that Surrey Hills is now the opposite to Ruth Park's depiction, being a desirable residential area for the rich and prosperous. How times change.

If anyone lived off the smell of an oily rag, it was these folk. The dad was a low paid worker who screwed caps on toothpaste tubes for a living, and that had to support his whole family, including his bed-ridden parents and parents-in-law. Needless to say, it didn't stretch far. It was a miracle that young Charlie was lucky enough to get hold of one of the chocolate bars that contained a ticket to Wonka's factory. Even though they loved each other dearly and sang plenty of songs together, it was time this family had a lucky break.

The Quimby Family
Many us probably loved these tales by Beverly Cleary about Ramona, her big sister Beezus, their hard-working parents and new baby sister. For such a chunk of the series, they suffer quite severe financial straits, because the father, Robert, has lost his job, and no amount of job seeking seems to help. The mother, Dorothy, must take upon herself a part time job as a doctor's receptionist, forcing her to adjust the girls' timetables. It's clear that every dollar matters, and there's a lot of month left over at the end of the money. Yet they still had their awesome times together, which make the books so charming to read.

The Heck Family
They belong in a sitcom and not a book, but I'm going to round off my list with these guys from The Middle, since they're definitely one of my favourite poor families. Watching an episode is weirdly like looking into a mirror for me. Mike and Frankie Heck (played by Neil Flynn and Patricia Heaton) find suburban life is as much of a financial struggle as we do. Their three kids have the same sequence (boy, girl, boy) and age gaps as ours. And since each season covers a year in their lives, they've grown at the same rate, living similar milestones. Watching Frankie's homespun wisdom and decisions to make the best of things has boosted my spirits a lot over the years. Best of all, more episodes are still being made.

So there are my picks. Getting hold of a copy of each of these and having a binge reading or viewing session would have to make you feel brighter, especially if you're financially challenged as we are. I'm so glad we can pay virtual visits to families in similar straights whenever we choose to, because they always make me feel better. If you feel like you need a dose of them too, I encourage you to do so. And if you can suggest any others, please do.