'I Capture the Castle' by Dodie Smith 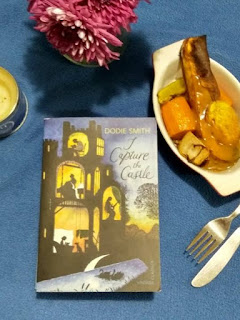 Through six turbulent months of 1934, 17-year-old Cassandra Mortmain keeps a journal, filling three notebooks with sharply funny yet poignant entries about her home, a ruined Suffolk castle, and her eccentric and penniless family. By the time the last diary shuts, there have been great changes in the Mortmain household, not the least of which is that Cassandra is deeply, hopelessly, in love.

MY THOUGHTS:
I don't know why it took me so long to ever read this, because it was delightful. It's set in the English countryside in 1934. The story is written in the form of 17-year-old Cassandra's diary. On the surface, her family's lifestyle appears romantic and idyllic. They live in an ancient castle, and her father is the celebrated author of a best-seller. But behind closed doors, everything is shabby and ramshackle. He's had writer's block for several years, and his lecture circuit days are far behind him. Things are falling apart, they're always a little hungry, and nobody has earned a cent for months.

All the Mortmains felt like family by the time I reached the end. Cassandra's beautiful sister Rose is a self-proclaimed gold digger, who vows she'd make a deal with the devil to get out of their financial straits. Their stepmother Topaz used to be an artist's model, but now simply does the housework, although she keeps up some of her Bohemian and free-spirited ways. The younger brother Thomas is bookish and perceptive. And then there's Stephen. He's not really a family member at all, but the son of their housekeeper. He stayed on with them after her death, and makes no secret that he's in love with Cassandra. And he's stunningly good looking. But she only thinks of him as a brother.

One wet evening, their two young landlords lob there unexpectedly. They are Simon and Neil Cotton, the wealthy brothers who will inherit the big property next door, and it's their first time in Britain. Romantic intentions and mess-ups are unleashed everywhere. The characters all find that the most sensible people to fall in love with aren't the ones who steal their hearts.

Cassandra's wry reflections about life were the highlight for me. Seventeen is a perfect age for this main character, because she swings back and forth between considering herself a woman and a child. Or maybe Cassandra is on a threshold, and really is both a woman and child simultaneously. She reminds me what seventeen was like. Although  you feel you still have a lot to learn, some of your insights are probably fresher and closer to the truth than the adults', who have let conventional attitudes wear theirs away. Her reflections about such things as wealth and religion are really refreshing.

For example, Cassandra wonders whether riches may eventually erode the joy of life. Does a woman who can buy an expensive dress whenever she feels like it experience the same elation she felt herself, when treated to one twenty-five shilling new dress?

I had a few observations about life in the thirties. What's the deal with selling alcohol to minors? When Cassandra ordered some, Mrs Jakes, the publican said, 'I can't legally sell it to you before twelve noon.' I'd expected her sentence to finish, 'I can't legally sell it to you because you're only seventeen.' But she weakens, and Cassandra drinks a glass of port followed by creme de menthe. Whoa, that took me by surprise. And what's the deal with Simon's beard? The girls hate it so much, and keep paying him out for growing it. I have to assume the 1930's wasn't the decade for making facial hair fashion statements. He'd probably fit well into our current hipster era, where some young guys grow beards like Ned Kelly and even twirl their moustaches.

I love how the story ends for several of the characters, and am happy with the sort of open-ended finish for Cassandra. Whether or not you're a big fan of her crush, you can easily imagine things swinging either way, but I won't get into plot spoiler territory. I think she'll do okay if she keeps going the same, because people who love life and know how to reap contentment from simple things have a natural advantage.

The book's title is clever. It has connotations of the past, when castles such as their were really pivotal in battles and war. But Cassandra simply refers to the way she manages to capture all the people who live there with her word pictures.

Needless to say she has plenty of excellent quotes all through, but I'll finish with just some of them. 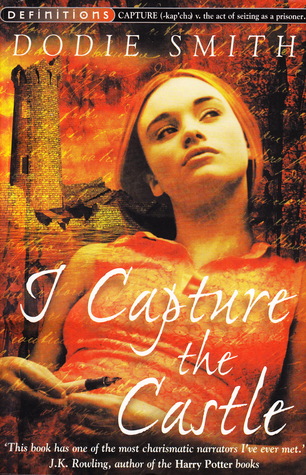 About wealth: Richness must always be a bit dulling to the senses. It takes the edge off joy as well as sorrow.

About being in love: If someone even mentions his name, it's like a little present to me.

About their lousy weather: Anyone who could enjoy the winter here would have to find the North Pole stuffy.

About her sister: Rose is a girl who cannot walk her troubles off or work them off. She's a girl to just sit around and glare.

About their father: There was always a vague idea that useful things would come later probably, when he wrote his next book.

About religion: It's only the word 'God', you know. It makes such a conventional noise. (To which the vicar replies, 'It's merely shorthand for where we come from, where we're going, and what it's all about'. He's a wise man, although Cassandra only ever refers to him by his handle, 'the vicar')

About reading: When I read a book, I put in all the emotion I can, so that it is almost like writing the book as well as reading it, or rather it is like living it. It makes reading so much more exciting, but I don't suppose many people try to do it.

About feeling sad: Noble deeds and hot baths are the best cure for depression.

And my favourite: Contemplation seems to be about the only luxury that costs nothing. (What a true word that is!)

If you enjoy family stories set in the English countryside, I think you'd love this book.