'The Brothers Karamazov' by Fyodor Dostoevsky 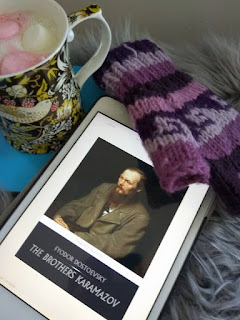 The murder of brutal landowner Fyodor Karamazov changes the lives of his sons irrevocably; Mitya, the sensualist, whose bitter rivalry with his father immediately places him under suspicion for parricide; Ivan, the intellectual, whose mental tortures drive him to breakdown; the spiritual Alyosha, who tries to heal the family’s rifts; and the shadowy figure of their bastard half-brother Smerdyakov. As the ensuing investigation and trial reveal the true identity of the murderer, Dostoyevsky’s dark masterwork evokes a world where the lines between innocence and corruption, good and evil blur, and everyone’s faith in humanity is tested.

The Brothers Karamazov is a passionate philosophical novel set in 19th century Russia, that enters deeply into the ethical debates of God, free will, and morality. It is a spiritual drama of moral struggles concerning faith, doubt, and reason, set against a modernizing Russia.

MY THOUGHTS:
This was my choice for the Russian Classic category of the 2017 Back to the Classics Challenge. I was most intimidated by this category, since I assumed Russian classics are probably mostly thick-as-brick epics filled with tragic events in ice and snow, with political uprisings, tsars and serfs in the background. This book sounded interesting because the blurb said it could well be one of the greatest novels of all time, and that's a very bold claim. I was sceptical about that, but then I started, and WOW! Now I'll have to call it one of my all time favourites. As well as being quite an intense family saga, it's all about faith versus doubt, and reason versus passion. It is pretty thick, but I wanted to keep reading every chance I could.

It all takes place in a little village called 'Skotprigonyevsk.' Luckily for us, most of the time it's simply referred to as 'our little town.'

Fyodor Pavlovitch Karamazov is a lecherous, unpleasant old man who has three sons in their twenties from two different wives, both of whom he treated horribly. On the surface, each of the boys could be said to represent one of the three aspects of man. There's physical Dmitri, who can't master his earthly passions; intellectual Ivan, whose brain keeps torturing him; and spiritual Alexey, who feels called to enter a monastery as a novice, aged twenty. If you think this makes them sound like cardboard, one-sided characters, no way! They are all deep and complex enough to make us love them.

Oh, and there's also Smerdyakov, Fyodor's young servant. Although it's never been openly acknowledged, everyone is 99.9% certain that he is actually his illegitimate son, since Fyodor was rumoured to have raped 'Stinking Lizaveta' the mute village vagrant who gave birth in his garden. Although Smerdyakov knows better than to ever acknowledge his half brothers as such, there's a major chip on his shoulder as he hangs creepily in the background. Dmitri calls him, 'the epitome of all the cowards in the world on two legs, with no character to speak of.'

One night, old Fyodor gets what many believe was probably coming to him. Someone smashes the back of his skull and kills him, and it was most likely one of his sons, who have a swarm of motives between them.

It's easy for everyone to pin the blame on Dmitri, whose name is shortened quite often to Mitya. An impulsive guy who'll wear his heart on his sleeve, he always speaks (or punches) before he thinks. He made no secret that he wanted to kill the old man, who has not only withheld Dmitri's inheritance from his mother, but is also trying to use it to seduce Grushenka, the girl Dmitri loves. But undercurrents are bubbling away elsewhere too, so is it really that clear cut?

The brilliant Ivan, the middle brother, is a scholar with a major existential crisis. He can't dismiss the idea that man invented God to suit himself, rather than vice versa. I came to really appreciate the raw and honest young atheist whose huge intellect and photographic memory become burdens rather than gifts. His flippant approach conceals his desperation, giving me the impression that he's so open with his youngest brother because he'd love to be convinced out of cynicism into faith. And Ivan's madly in love with Katerina, the fiance Dmitri dumped so he could pursue Grushenka. So their eldest brother is not Ivan's favourite person.

The youngest is also known as Alyosha, which seems to be a derivative of Alexey. He's the mortar that pulls the whole story together. He loves unconditionally, never finds fault, and often becomes our lens. I doubt I would have loved Dmitri and Ivan so much if I didn't see them through Alyosha's eyes. Perhaps most importantly, he makes me think of Jesus' commission for his friends to be his hands and feet. Ivan spends so much time griping about the lack of proof of God's existence, but I think his smartness just caused him to search in the wrong places. He need look no further than his kid brother to see concrete proof that the spirit of God exists, through the lives of his followers. Even the omniscient narrator refers to Alyosha at one point as, 'the young hero I love so much.'

So there's the scenario. Even though we get to love each of the brothers heaps, at the same time, we can't help wondering which of them may be tied up with the murder, and how. Or was it a combination crime? And the solution is all tied with blackmail, psychological twists that do your head in, and arguably justice. Before I get too carried away, I'll give some quotes from the story. Needless to say, a book this thick is full of them, but the following are a few of my favourites. 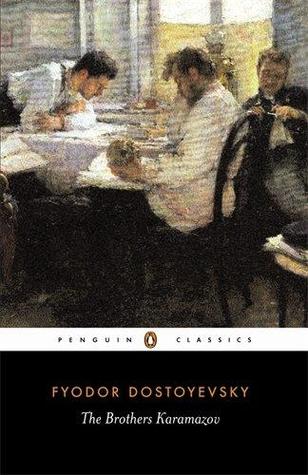 Father Zossima, the old man who was Alexey's mentor and hero, has some good things to say for a start. He also predicts that his young follower will, 'bless life, and make others bless it.'

1) Men are made for happiness, and anyone who is completely happy has a right to say to himself, "I am doing the will of God."

2) Precious memories may remain even of a bad home, if only the heart knows how to find what is precious.

3) If you love everything, you will perceive the divine mystery in things.

4) Love the animals. God has given them the rudiments of thought and joy untroubled.

2) People sometimes speak of bestial cruelty, but that's a great insult and injustice to beasts. A beast can never be so artistically cruel as a man.

(At one point, Ivan has a conversation with the devil, who's sitting on his couch during a time when he's sick. The doctors warned Ivan that he may be subject to hallucinations, but he wouldn't listen. It's a very interesting chapter, with some fascinating dialogue.)

Ivan (trying to disprove the hallucination): You're just an incarnation of myself, but only one side of my thoughts and feelings. Only the nastiest and stupidest of them.
Satan: If I'm like you in my way of thinking, it's all to my credit.

Satan: From the vehemence with which you deny my existence, I'm convinced that you believe in me.
Ivan: Not in the slightest. I haven't a hundredth part of a grain of faith in you.
Satan: But you have the thousandth of a grain. Homeopathic doses perhaps are strongest.

But one of the book's best quotes was by Dmitri. He's a guy who normally drops lines such as, 'On the way here it seemed alright, and now it's nothing but nonsense.' The narrator says that at one point, 'an absurd, chaotic confusion followed, but Mitya was in his natural element and the more foolish it became, the more his spirits rose.' So this heartfelt quote by him is a great place to wrap up this review.

Dmitri: It's God that's worrying me. What if he doesn't exist? Then man is the chief of all the earth, the universe. Magnificent. Only how is he going to be good without God? I always come back to that. For whom is man going to love then? To whom will he be thankful? To whom will he sing the hymn?

Sometimes I wondered just what the women in Fyodor Dostoevsky's life must have been like, because I doubt there's one female character who didn't have a hysterical fit at some point in the story. They grew on me though, just like the guys. I really liked Grushenka by the end, and Katerina made me grin when she called Alyosha a 'religious little idiot' just because he hit a bit too close to home at one time. Feisty ladies indeed.

Altogether, this has to be one of the books of the year for me. And since there's probably no way I'd ever have read it if I hadn't been doing this reading challenge, you can consider this blog post a great shout out for reading challenges too.