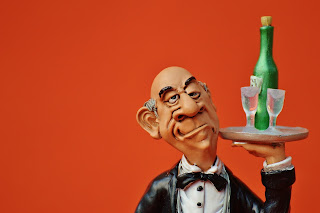 During my reading this year, it keeps standing out to me that some of the most excellent characters in given books are the servants. Have you noticed that literature is full of stories where a servant steals the show? In some cases he becomes even more legendary than his master, or at least equally so. It made me wonder why that may be the case, especially since many servants have tended to be looked down upon and taken for granted throughout the centuries. Perhaps hero servants keep popping up to encourage us to be noble, generous and kind-hearted, regardless of our circumstances. They seem to remind us that's there's never a good reason to be resentful or churlish about our occupations, because life is what we make it. Maybe people in humble circumstances are actually the lynch pins of society, doing so much good in so many ways. Here are ten that have popped out at me, and I love them all.

He was Mr Pickwick's young servant, with enough sharp intelligence to appreciate his master's many excellent qualities. Sam was devoted to his employer to such an extent that when Pickwick was thrown into debtor's prison over a matter of principle, he devised a way of getting arrested, so he could follow on his heels and continue to serve him. Sam asked his jolly old father to accuse him of being unable to repay a loan, which of course was completely false. But being the Victorian era, when anything could get a man thrown in jail, his plan worked. My review is here.

2) Passepartout
The young French acrobat didn't know what lay ahead of him when he was employed by Mr Phileas Fogg. Although Fogg was exacting and never forthcoming, Passepartout's loyalty never swerved. Even when the detective Fix almost managed to convince him that Fogg had robbed a bank, Passepartout decided that accusatory hearsay would not influence the scrupulous way in which he served his master, who trusted him. Not only was he intensely loyal, but saved the day on several occasions (He saved several of the 80 of them, in fact). My review is here.

3) Gabriel Betteredge
The elderly butler and head of staff is fiercely devoted to the Verinder family, since he served them from his boyhood, and therefore remembers every single one of them from their infancy. For that reason, he's not going to cave in to wild rumours that one of them might be a thief or scoundrel. He knows them as well as anybody, and will never stop standing up for them. My review is here.

He appears in several stories by P.G. Wodehouse. Young Bertie Wooster is a member of the idle upper class, who keeps finding himself entangled in awkward social messes, because of his naivety. And the British aristocracy may well have been the worst crowd to possibly upset. Bertie is a complete embarrassment to his poor Aunt Agatha, but his butler Jeeves has the loyalty and sense to keep saving the day with complete tact. Perhaps he was one of the most under-paid servants in history, when you consider all the extra stresses that made up his day's work.

He's the worker Robinson Crusoe obtained for himself while he was shipwrecked on a lonely island. He named him after the day of the week he appeared, and ended up teaching him English and converting him to Christianity. Friday is grateful and obedient, since he considered Crusoe helped saved his life. He'd been destined to be a meal for cannibals. I read this long, rambling book years ago at Uni. One thing many people may not realise is that Robinson Crusoe had been on an expedition to fetch slaves in Africa when he was shipwrecked. The book has its fair share of British cultural imperialism, with Crusoe referring to himself as the 'king' of the island, and regarding Friday as a savage he needed to tame. It wasn't my favourite book, but I did appreciate a little joke I once heard, that Robinson Crusoe was the only man who ever managed to get all his work done by Friday :)

6) Samwise Gamgee
He starts off in Lord of the Rings as Frodo Baggins' humble gardener, and is dragged off on the quest sort of accidentally, when he overhears a private conversation. It was the best thing that could have happened to Frodo, since Sam proves to be steadfast, strong and devoted. He saves the day on several occasions to the point of physically carrying Frodo when he's too weak to continue alone. And as a bonus, Sam turns out to be one of the few characters capable of resisting the pull of the Ring. What a hero!

7) Sancho Panza
He's the illiterate farmer who was dragged along on the adventures of the delusional Don Quixote, who asked him to be his squire. Sancho's initial lure was the hope of the vague grand reward that Quixote promised. He considers himself to be the pragmatic realist, with enough common sense to balance his master's flights of fancy. However, the faithful sidekick role grows on him, and he does pick up some of his master's romanticism and idealism, despite himself.

The simple-natured half giant is groundskeeper at Hogwarts. His love and devotion to his employer, Albus Dumbledore, is equal to that of his favourite student, Harry Potter. However, although Hagrid always had the best intentions, he needed keeping an eye on at times. He's a bit scatterbrained and makes the occasional stuff-up, of which I'll mention no plot spoilers. But his wonderful character and powerful frame make him an excellent person for Dumbledore to call a loyal follower.

9) Merlin
I'm talking specifically about the TV series of the same name. It ran between 2008 and 2012, and was an interesting take on the Arthurian legends, since Merlin was the teenage servant of the equally young Arthur, who had no clue of Merlin's true skills. Arthur's father, Uther Pendragon, had banned magic throughout the land, so Merlin had to keep his powers top secret. But he used them over and over to help save the oblivious Arthur's life. Lack of thanks was just part of the job.

10) Eliezer
He's generally believed to be the trusted servant of the patriarch Abraham, who was sent from Israel back to Abraham's birth place in Mesopotamia, to find a wife for his beloved son Isaac. Eliezer relied heavily on prayer and God's leading every moment, which helped him return with the right girl, Rebecca. Eliezer was probably the servant who was expected to inherit all of his master's vast wealth, when it seemed Abraham would never father an heir of his own flesh. That's makes Eliezer's devotion and hard work all the more impressive, since he went on giving the job his all without feeling hard-done-by.

How many of these are you familiar with? Do you love any of them yourself? And as always, I'd love it if you could suggest any more.