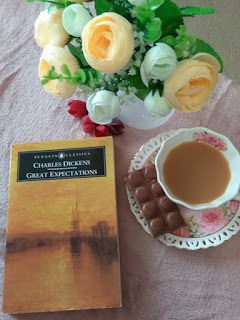 In what may be Dickens's best novel, humble, orphaned Pip is apprenticed to the dirty work of the forge but dares to dream of becoming a gentleman — and one day, under sudden and enigmatic circumstances, he finds himself in possession of "great expectations." In this gripping tale of crime and guilt, revenge and reward, the compelling characters include Magwitch, the fearful and fearsome convict; Estella, whose beauty is excelled only by her haughtiness; and the embittered Miss Havisham, an eccentric jilted bride.

MY THOUGHTS:
This is one of my favourite Dickens tales, and coming of age stories. There's so much to say about the main character Pip, I'll be sharing a separate post soon just to ramble on about him. (Update: Here it is.)  For a lot of book, he isn't actually a snob, yet he is a wannabe snob, which is a step in that direction. But more on that later. For now, I'll start with a quick summary.

As a small boy, Pip has forced encounters with a couple of scary people. He's frightened by an escaped convict on the bleak marshes, who demands food and a file for his chains, or threatens dire peril. Pip is also enlisted as a sort of companion to eccentric recluse Miss Havisham and her adopted daughter Estella. He's supposed to 'play' there, whatever that's meant to mean. He grows up longing for a lucky break where he's in charge of his own destiny, and one day in his late teens, a mysterious benefactor offers him the chance to begin anew as a fashionable gentleman in London. One of the only conditions is that Pip makes no attempt to discover their identity. Happy not to look a gift horse in the mouth, our hero sets off to where the action is.

Pip's such a great character, but they're all described in a  way that makes them live and breathe through the pages. Miss Havisham first strikes Pip as a person who might disintegrate to dust if she's exposed to daylight, like some sort of mummified freak, so that's how we picture her from then on. There's Jaggers, the intimidating lawyer, and his reliable clerk Wemmick, who has a completely different persona at home to the one he adopts at work. And always in the back of Pip's mind is the haughty and beautiful Estella, who he'd give anything in the world to impress. There are also excellent cameo characters like Trabb's boy, who works for the haberdasherer. What a legend!

The story is intriguing for the historical and cultural insights it gives us. I love how Pip and his best friend Herbert get along together. My eldest son and his friends are a similar age to them, so it's fun to see their counterparts in the 1800s, going out to the theatre, trying to manage their finances, and cooking their Victorian dude food. (I've included these lads from Great Expectations on my list of best bromances.)

I can see that if I'd lived back then, following the installments in the magazine, I would have been amazed and astounded by the sudden revelations and all the irony and action. It's the type of story that prompts us to examine where our allegiances lie, and to question where they should lie. Some stories are obviously better being told in first person, despite the limitations of time and place, and this is one of them. I'm glad Dickens opted to have Pip telling his own story, because it's an unforgettable ride.

You may also like this post about whether or not Dickens gave the ending of Great Expectations a Choose Your own Adventure twist. You'll find it here.