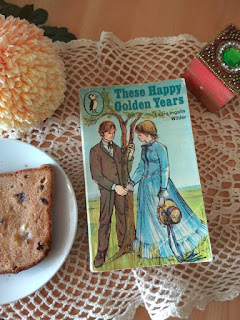 Fifteen-year-old Laura lives apart from her family for the first time, teaching school in a claim shanty twelve miles from home. She is very homesick, but keeps at it so that she can help pay for her sister Mary's tuition at the college for the blind. During school vacations Laura has fun with her singing lessons, going on sleigh rides, and best of all, helping Almanzo Wilder drive his new buggy. Friendship soon turns to love for Laura and Almanzo in the romantic conclusion of this Little House book.

MY THOUGHTS:
There's a sense that Laura intended this to be the last in her classic kids' series about her youth. It begins as she's off to fulfill her first teaching contract, boarding with strangers far from home, and ends on the evening of her wedding day. Of course there's plenty in between.

But it starts with the dysfunctional family she stays with. Ah, poor Mrs Brewster. As a kid I considered her the villain of the book, and agreed with Laura's verdict that she was 'just a selfish, mean woman.' But this time around, I felt like I was reading between lines Laura might have been unaware she was writing. Mrs B seems to show classic symptoms of deep clinical depression, but it was unidentified as a medical condition back then, so she had no outlet or source of support. What a miserable life she led.

In our times, her antisocial behaviour might be recognised as clues of what it really was. Apathy with her demanding toddler, a tendency to let the housework lapse, and sitting and brooding with unkempt hair, because she simply couldn't muster enough energy or enthusiasm to care anymore. She knew that the next day would be just the same as the last. Being polite to a house guest she didn't even invite was too big a stretch. And at the end of her tether, she couldn't hold back violent outbursts of sadness and resentment. Maybe she even suffered from post natal depression, intensified by being stuck out in a bleak, inhospitable place with no form of entertainment. Sometimes a disagreeable exterior covers lots going on beneath. Mrs Brewster had good memories of her past back in the east, but no relief from her new life whatsoever.

I can't help feeling really sorry for her. Laura was deeply homesick beneath their roof, but it only lasted for eight weeks until her teaching contract was finished. But Mrs Brewster's homesickness presumably dragged on indefinitely, even after her threat to do something desperate, which I see as a cry for help. She had good memories of her past back in the east, but no relief from the monotony of her new life whatsoever. Instead of a villain, she's now a victim in my way of thinking. I wonder whatever became of her.

Another person whose life I'd love to trace was Clarence Brewster, that smart-alec stirrer who could've caused serious trouble in Laura's little school, but decided not to. His character appealed to me, the way it was written. Wouldn't any teenage boy hate submitting to a 5-foot tall girl younger than himself? He seemed to show a good heart in restraining himself and deciding to jump through the hoops after all, especially when he apologised to Laura on the last day. I would've liked to think he ended up doing something great with his life, but a search through Google and other biographies seems to indicate that he was convicted of murder charges later in life. How sad! Another casualty of the harsh lifestyle perhaps, because Clarence never struck me as murderer material, but a young man with great potential.

These new faces are all tied up with Laura's stint at teaching. It's so amazing to modern readers that kids as young as 15 can be sent out as qualified teachers, but we get it when we read the book. The job of teaching seemed far more straightforward than now, in many ways. There were standard text books set by whoever was head of education, full of successive lessons, and that was it. There seemed no need for much creative input from teachers. No curriculum planning, no craft or drama, no marking of long essays or assigning individual projects, no challenge to use their own imaginations. They come across more like glorified baby-sitters, there just to keep discipline and offer a helping hand if anyone couldn't understand the concepts in the books.

It appears the face of education really has changed a lot in the last 150 years or so, even when we think the basic model has stayed the same. Current teachers feel compelled to make lessons fun for their students, but it wasn't the emphasis in the nineteenth century. Students were expected to do the work. They weren't expected to enjoy it. It was simply a bonus when bright sparks like Laura enjoyed it anyway.

The story of Laura's budding relationship with Almanzo is beautiful, from the moment he surprises her by picking her up from the Brewsters' at the end of her first week there. This is among my favourite romances, even though it isn't labelled as one. It's a novel for kids, and Laura comes across too restrained to use the word anyway. The closest she comes to admitting she's fallen in love with him is when she tells Mary, 'We just seem to belong together.' The pair of them seem perfectly suited in many ways, including their affection for horses and dare-devil streaks. Almanzo was a bit of a multi-tasker, who'd combine breaking in frisky horses with seeing his girlfriend. But she was up for it, and it makes a fun read. (This pair is on my list of awkward literary marriage proposals) Laura was quite witty in her reply to his round-about way of popping the question.

Through it all, she shows the same traits we always love about her. Mary pays her sister a beautiful compliment when she says, 'I never see things so well with anyone else.'

But I think the bit of dialogue, to best sum up the series, is when Laura and Almanzo are planning their future, and the home he's building. He says, 'It'll have to be a little house. Do you mind?' And she replies, 'I have always lived in little houses. I like them.' I think she meant this to be the end, but we know it's not quite.

Next up will be The First Four Years.
Posted by Paula Vince at 5:00 AM 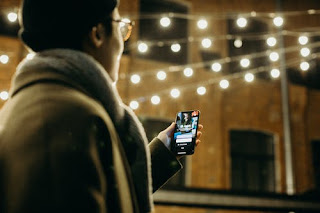