Some of literature's most awkward marriage proposals 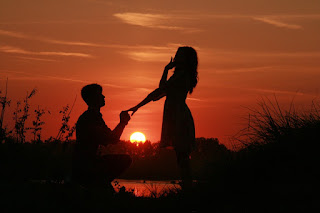 I understand that guys may have a tense and anxious time when planning how to pop such a vulnerable, potentially life-changing question. Most of these books were written by women who either wanted a bit of a laugh, or to prove that being put on the spot and having to come up with an answer isn't easy either.

There are hundreds to choose from, of course, but I've decided to go for a few of the more well known literary proposals I can remember.

1) Almanzo Wilder to Laura Ingalls
Using the indirect approach and putting out feelers may be fine, but look out for quick witted girls like Laura.

2) Maxim de Winter to his second wife
Wording your proposal as an ultimatum isn't the traditional way to go, and may lead to confusion. Following up with an insult doesn't help either.

Maxim: Either you go to America with Mrs Van Hopper or you come home to Manderley with me.
Young Heroine: Do you want a secretary or something?
Maxim: No, I am asking you to marry me, you little fool.
(From 'Rebecca' by Daphne du Maurier)

3) Billy Andrews to Anne Shirley
Guys, however nervous you may feel, please don't do it by proxy. Be man enough to at least ask her in person.

Jane: Anne, what do you think of my brother, Billy?
Anne: I don't understand. Why... I like him, of course.
Jane: Would you like him for a husband?
Anne: Whose husband?
Jane: Yours of course. Billy wants to marry you. He's always been crazy about you, and now father has given him the upper farm in his own name, and there's nothing to prevent him from getting married. But he's so shy, he couldn't ask you himself if you'd have him, so he got me to do it.
(From 'Anne of the Island' by L.M. Montgomery)

4) Jimmy Pendleton to Pollyanna Whittier
This was a delicate situation, and no fault of the hero. Pollyanna was in love with her childhood friend Jimmy, but suspected that his adopted father, John Pendleton, intended to propose to her himself. Since Pollyanna's mother had broken John's heart, she felt obligated not to repeat history. Poor Jimmy didn't know the craziness he was entering into.

Jimmy: You mean you'd marry him, Pollyanna?
Pollyanna: No! I mean..er... yes, I suppose so.
Jimmy: Pollyanna, you wouldn't, you couldn't. You're breaking my heart.
Pollyanna: I know it, I know it! I'm breaking mine too. But I'll have to do it. I'd break your heart, I'd break mine, but I'd never break his.
Jimmy: Alright little girl, it'll have to be as you say. But surely never before was a man kept waiting for his answer till the girl he loved, and who loved him, found out if the other man wanted her.
(From 'Pollyanna Grows Up' by Eleanor H Porter)

5) Fitzwilliam Darcy to Elizabeth Bennett
Don't ever begin a marriage proposal by telling the lady that it was against your better judgment!

Darcy: In vain have I struggled. It will not do. My feelings will not be repressed. You must allow me to tell you how much I admire and love you.
(Then when she ticks you off as you deserve, don't stick your foot in it even more!)
Darcy: Could you expect me to rejoice in the inferiority of your connections? To congratulate myself on the hope of relations whose condition in life is so decidedly beneath my own?
Elizabeth: You are mistaken, Mr Darcy, if you suppose that the mode of your declaration affected me in any other way than as it spared me the concern which I might have felt in refusing you had you behaved in a more gentleman-like manner. You could not have made me the offer of your hand in any possible way that would have tempted me to accept it.
(Bravo Elizabeth. He's lucky he got another chance.)
(From 'Pride and Prejudice' by Jane Austen)

6) Rhett Butler to Scarlett O'Hara
If you want to propose to a lady, don't go on the very day of her former husband's funeral! She'll consider it bad taste.

Rhett: My news is this. I still want you more than any woman I've ever seen, and now that Frank's gone, I thought you'd be interested to know it.
Scarlett: I... you are the most ill bred man in the world, coming here at this time of all times, with your filthy... and Frank hardly cold. If you had any decency... would you leave this...?'
Rhett: Hush, I am asking you to marry me. Would you be convinced if I knelt down?
(From 'Gone with the Wind' by Margaret Mitchell)

7) St John Rivers to Jane Eyre
Claiming that you speak for God as well as yourself must be the ultimate pressure. This has got to be one of literature's most unromantic proposals.

Rivers: Jane, come back with me to India. Come as my helpmeet and fellow labourer. God and nature intended you for a missionary's wife. It is not personal but mental endowments they have given you. You are formed for labour, not for love. A missionary's wife you must, shall be. You shall be mine. I claim you not for my pleasure but for my sovereign's service.
(From 'Jane Eyre' by Charlotte Bronte)

8) Valancy Stirling to Barney Snaith
It's a very brave move for a girl to propose to a guy. Expect him to be surprised, and it might help to have something up your sleeve.

Barney: Going home, Miss Stirling?
Valancy: I don't know... yet.
Barney: I thought I'd run down and see if there was anything I could do for you.
Valancy: Yes, there is something you can do for me. Will you marry me?
Barney: Come now. I knew luck was just waiting around the corner for me. All the signs have been pointing that way today.
Valancy: Wait. I'm in earnest. Of course with all my bringing up I realise this is one of those things a lady shouldn't do.
Barney: But why... Why?
Valancy: For two reasons. The first is I'm crazy about you. The second is... this.
(From 'The Blue Castle' by L.M. Montgomery)

I hope you enjoyed this face palming post, brought to you from my memory and a quick bit of flipping back through books.