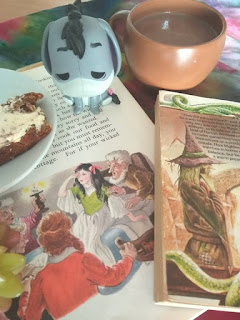 This post is dedicated to a handful of thorough grouches and pessimists. The company of human grouches wears thin pretty quickly if we're around them for too long, but have you noticed the abundance of lovable grouches in fiction? Curiously, they tend to be quite endearing as often as not. And even more curiously, so many of them aren't even human. Let's take a look at some. 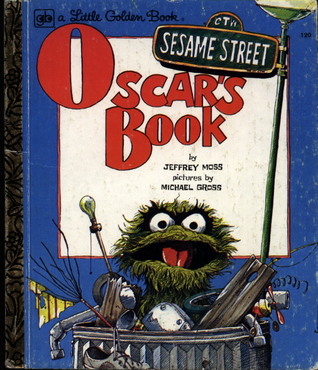 1) Oscar the Grouch
He can go first on the list, since he's probably the first of the bunch we ever meet as tiny kids. This green furry individual lives in a trash can on Sesame Street. His treasures consist of all sorts of stinky rubbish which gets tossed there. (Much like the stinky, rubbishy attitudes of his grumpy human counterparts perhaps.) Although 'grouch' describes his cynical and misanthropic attitude, it's also the name of his species. Oscar always looks forward to his annual Grouch Convention, which sounds like a grumble fest worth missing. His and his girlfriend Grundgetta have a rocky relationship, but no doubt they like it that way.

2) Grumpy
Like the other six dwarfs, his name sums up his character. I guess he was born with a pessimistic bent, further fueled by his lifestyle. If you're a bit dour to start with, it doesn't help when you have to put up with the same companions 24/7. Especially when they include a dope, a perpetual sneezer, a narcoleptic who keeps falling asleep on the job, and a shy dude who'll never speak up. But I suspect the friend who might have got on Grumpy's nerves the most was the ever-optimistic Happy.

3) Eeyore
I hold with the theory that 100 Acre Wood residents represent different human medical and psychological conditions. Eeyore possibly suffers from clinical depression. At any rate, he feels overlooked, mopey, sad and sorry for himself. But Pooh, Piglet and Tigger learn an interesting lesson when they set out to cheer him up. The gloomy little donkey thanks them kindly but actually prefers his melancholy outlook. Their good intentions simply make him feel worse. He's a good indication that sometimes pessisism can be its own form of contentment. (I've written more here about the satisfying side of melancholia)

4) The Mock Turtle
He's a pitiful character with large, perpetually brimming eyes. When Alice asks what's the matter, the gryphon tells her, 'Nothing, it's all in his fancy. He hasn't got no sorrows, you know.' But when we dig deeper, we discover he's depressed because he's not a real turtle. That's when we realise we can't possibly take this guy seriously. Mock Turtle soup was a popular dish in Victorian times, made from the meat of other animals believed to taste like turtle. But in Wonderland, apparently there is an actual creature called a Mock Turtle! Wouldn't you be depressed, if you knew you existed just to be made into soup?

5) Kreacher
He's a dour and miserable old house elf who formerly worked for the infamous Black family. Kreacher's bitterness is compounded by having to serve Sirius, who's at the end of the family line and never makes life easy for him. Kreacher complains all day and lets the house deteriorate, just like his unkempt self. Eventually Sirius' gruff treatment, coupled with his own deep resentment, leads to tragedy. But later, when Harry Potter and his friends treat Kreacher kindly, he begins to warm to them. We last see him as a well-groomed, silky little house elf busy making them a steak and kidney pie. So there we have it, even grouchy pessimists with huge grudges may end up being nice to those who treat them decently.

And perhaps my favourite pessimist of all...

6) Puddleglum
The lanky, pasty-featured marshwiggles from Narnia are renowned for being a gloomy, pessimistic species, but still Eustace and Jill can hardly believe it when he tells them he's a relatively cheerful one. Especially since he always throws a damper on every optimistic word they say. Even his attempts at looking on the bright side fall far short. 'There's one good thing about being trapped down here. It'll save funeral expenses.' But Puddleglum turns out to be a true hero and legend. His general gloominess makes it all the more impacting when he's the one who refutes the evil Lady of the Green Kirtle in a famous speech of faith. (It goes along the lines of 'I'm all for Aslan, whether he exists or not, because he's better than anything you have to offer.')

Do you feel like shaking them, or more like hugging them? I think that part of their charm is that they appeal to the grouches buried deep inside each of us. Being always grouchy is no good for our health, and nor does it make us popular or socially acceptable. But sometimes it can help us defuse a bit, which is where these little guys come into the picture. Whether they're donkeys, turtles, house-elves, dwarfs, marshwiggles or even pure 'grouches', they strike the shadowy chords we don't want to admit. By sympathising, and even having a good laugh at them, we can shake off our own blues and get on with our day. While we may make an effort to keep a lid on it at all times, these characters don't have to. We're fond of them because they give us the subtle, comforting message that it really is a bit of a screwed up old world out there sometimes, but we're not alone. Is your favourite on this list?