Melancholia - The Happy side of Sadness 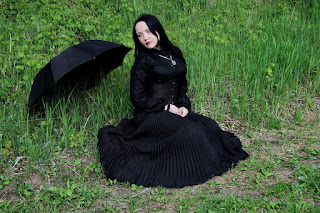 'Melancholy is the happiness of being sad,' said Victor Hugo.

That quote was an eye-opener for me. It sounds like a crazy oxymoron, but of course Hugo was right. His words may even clear up some confusion many of us have had about the issue. It's easy to think in a simplistic, black-and-white sort of manner when it comes to happiness. The dichotomy probably stems back to our childhoods. We learned as preschoolers that sadness is bad and happiness is good, so we shy away from everything that has the slightest whiff of gloom.

In my mind, I'd imagined some sort of nasty smelling brew with bad moods, minor irritations, full blown grief and bereavement all simmering away in the same pot. I wanted none of it! Just serve up cheeriness, joy and elation for me, thanks very much. If my friends or family members seemed to be partaking from the sadness pot, I thought it was my duty as a nice person to try to help them get over it and cheer them up. But melancholy is one of those dishes that may sound bad in theory, (like truffles, caviar, anchovies, or blue vein cheese), but people actually enjoy.

I thought of Gretchen Rubin describing her happiness experiment. One thing she tried was indulging in tragic autobiographies and other true stories. It was meant to have a sort of cathartic effect. To her surprise, she found it worked for her. You can read my review of her book, The Happiness Project, here. Other authors have reported that writing books which highlight issues of social injustice, political mismanagement or other sad plights have helped to work the sadness out of their system and raise their contentment.

Then I thought of Anne Shirley and her friends, Diana, Ruby and Jane from Anne of Green Gables, merrily trying to write the most tragic tales possible for their story club. The more tears that were shed, the happier these girls were. They even made a sort of contest of it. They aren't the only ones who have found this sort of melancholic activity has an uplifting effect. In fact, there seems to be something about melancholia that attracts teenage girls. If Anne and Co lived in our times, they might have gone along to watch 'Me Before You' with my daughter and her friends.

Next, I thought of the blues artists, so named because they've made an art out of their 'woe is me' music, which so many listeners can appreciate.

I didn't forget the prophet, Jeremiah. Since he seemed to exhale lamentations whenever he opened his mouth, some Bible scholars have assumed that he might have been suffering from clinical depression. That's not necessarily the case. He may have enjoyed his heavy calling, and been happier in his own way than anyone around him.

My favourite example comes from The House at Pooh Corner. After many failed attempts to cheer him up with all the bells and whistles they could think of, Eeyore tells Pooh and Piglet that their good intentions are merely upsetting him. He convinces them that they would be doing him a kindness if they just left him to enjoy his melancholy in peace, because that's when he's happiest. We shouldn't laugh at silly old donkeys who are happy being miserable, because we might be pointing the finger at ourselves. The proliferation of another oxymoron I'd call 'tragic entertainment' shows that the world is full of modern Eeyores.

If  you want to indulge your own bit of melancholia, plug in your headphones and crank up your Billie Holiday or Eric Clapton. Get your doona and hot chocolate ready for a movie marathon of Beaches, Titanic, A Walk to Remember and Dead Poet's Society. Or if you'd prefer to read your blues away, The Book Thief, The Lovely Bones, The Kite Runner or The Fault in Our Stars might do the trick. And these are to name only a few. Maybe it's partly because we really can't have a beautiful rainbow without the dark storm clouds and drenching showers. I consider myself a person who thrives more on happy tales, but getting stuck into the sad and desperate plights of heroes and heroines does work better than a dose of medicine at times.

You don't need to be a self-proclaimed Goth or Emo to benefit. However you like to indulge in your melancholia, have a good time and we'll see you on the other side.

Photo courtesy of Pixabay
Posted by Paula Vince at 5:00 AM