'A Drop in the Ocean' by Jenni Ogden 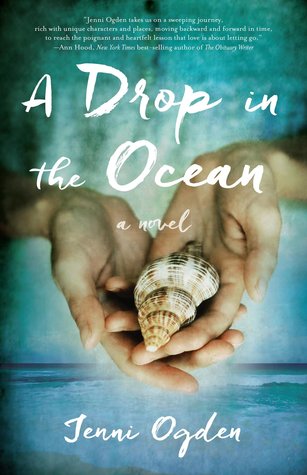 On her 49th birthday, Anna Fergusson, Boston neuroscientist and dedicated introvert, arrives at an unwanted crossroads when the funding for her research lab is cut. With her confidence shattered and her future uncertain, on impulse she rents a cabin for a year on Australia's Great Barrier Reef. However Turtle Island, alive with sea birds and nesting Green turtles, is not the retreat she expected. Here she finds love for the eccentric islanders who become her family; for Tom, the laid-back turtle whisperer; and for the turtles whose ancient mothering instincts move her to tears. But Anna finds that even on her idyllic drop in the ocean there is pain, and as the months fly past her dream for a new life is threatened by a darkness that challenges everything she has come to believe about the power of love. Evocative and thought-provoking, A Drop in the Ocean is a story about second chances and hard lessons learned in the gentlest of ways."

MY THOUGHTS:
It made me a bit nervous when the story turned out to be about a lady from Boston moving to an island in Australia. As an Aussie, I've often groaned out loud about the inaccurate way we are portrayed in fiction for American readers. Writers are sometimes way off when they imagine the attitudes we profess and the spoken expressions we use. It's not something you can just improvise, and sometimes I can't believe they assume the population of a whole country just won't notice. To my relief, this one wasn't too far off the mark. It turns out that Jenni Ogden is an author who has experienced life in both Australia and America, so has knowledge of both cultures.

There were a few aspects which really appealed to me about this novel. The main character, Anna Fergusson, is 49 years old. It's refreshing to have the occasional heroine her age. There are so many young women in their teens and twenties, or elderly ladies looking back on their lives. Those who are in between sometimes miss out, so I was happy to read Anna's story. In the first chapter, she discovers that she will no longer be funded for the grant she'd taken for granted. Unexpected setbacks sometimes happen, and after her initial upset, Anna decides to take a chance on something unlike she'd ever done before. She becomes caretaker at a lonely campground on a tropical island in the Barrier Reef. It sounded like a sea change in all senses of the world, and piqued my curiosity.

After the strong start, the impetus seemed to taper off a little bit when I got into the body of the story. The setting and relationships on Turtle Island are well described, but the story becomes more meandering and reflective than plot driven. Anna spends long sections delving back into her past, journalling and reflecting. Her relationship with Tom the turtle whisperer seems to evolve without too many twists or turns. The descriptions of the native turtle population are beautiful and well worth pondering, but for some time, nothing much happens in the way of a strong story line. This may be brilliant if you're after a quiet read with revelations of nature's beauty. But if you're looking for a page turner in the more exciting sense of the word, it might not fit the bill.

Thanks to She Writes Press and NetGalley for my review copy.