'Hector and the Search for Happiness' by Francois Lelord 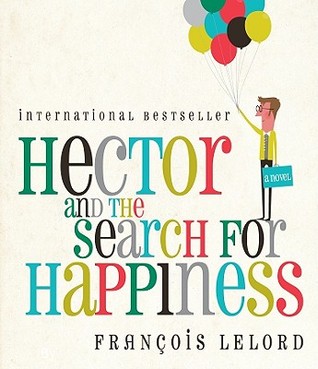 As I find happiness and well-being literature quite interesting, I thought I'd give it a try. It's not one of my favourites, but it's still a bit different.

“Once upon a time there was a young psychiatrist called Hector who was not very satisfied with himself. . . . ”

Hector is very good at treating patients in need of his help. But he can’t do much for those who are simply dissatisfied with life, and that is beginning to depress him. When a patient tells him he looks in need of a vacation, Hector takes a trip around the world to learn what makes people happy—and sad. As he travels from Paris to China to Africa to the United States, he lists his observations about the people he meets. Is there a secret to happiness, and will Hector find it?

Combining the winsome appeal of The Little Prince with the inspiring philosophy of The Alchemist, Hector’s journey ventures around the globe and into the human soul. Lelord’s writing inspires us to consider life’s great questions. Uplifting, empowering, and optimistic, this is a fable for our times and all time.

This is written like a fairy tale for grown ups. Hector is a young psychiatrist who is concerned that in spite of the advice and pills he administers, he can't seem to make his patients as happy as he wishes. He decides to take a trip around the world, taking in China, Africa and the USA, with the aim to understand what makes people happy or unhappy. If there's a secret, he's determined to find it.

This book has a simple, whimsical format, as if it's a kids' story book, and even begins with 'Once upon a time.' The hero is written to come across as part shrewd intellectual and part innocent little boy. There are frequent asides in parentheses, such as (Hector was intelligent but not necessarily smart). Without mentioning specific philosophies, nationalities and religions, these are often plain through the context.

Hector jots impressions in a notebook. He learns that you must be careful when you ask people directly whether or not they're happy, because it often makes men laugh and women cry. He meets several people, including a monk in a Chinese monastery, who wonders why so many westerners are interested in his religion when they have so many old and perfectly good religions of their own. Toward the end, Hector's findings are summed up by a well-known happiness specialist in 'the country with the most psychiatrists', who tells Hector that during his travels, he managed to discover several of the most popular indicators, and then attempts to them put them together in a formula.

Although it's an easy-to-read companion to all the non-fiction happiness texts out there, I quickly grew tired of Hector's womanising tendency, and the way it's portrayed indulgently as his funny little weakness. He cheats on his long-time partner, Clara, repeatedly during his travels and doesn't stop to consider that his 'if it feels good, do it' habit may bring the opposite of happiness to others as well as himself. That's not the habit of a nice guy. It was written as if he's a little boy who wants to sample different sweets, while he's messing with people's lives. I think it was trying to be a bit too cute, and came off superficial.

Surely those parable-cum-novels have to be really carefully crafted to work. This is just another one with main themes being poked in our faces every minute, and not always tastefully. In spite of what the blurb says, I didn't think it was much like 'The Little Prince' or 'The Alchemist' at all.