'The Invoice' by Jonas Karlsson 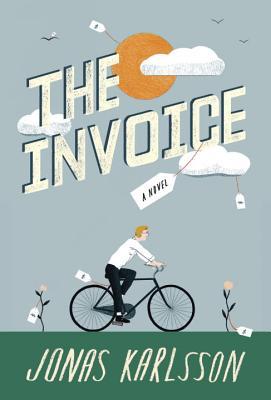 Hilarious, profound, and achingly true-to-life, Jonas Karlsson’s novel explores the true nature of happiness through the eyes of hero you won’t soon forget

A passionate film buff, our hero’s life revolves around his part-time job at a video store, the company of a few precious friends, and a daily routine that more often than not concludes with pizza and movie in his treasured small space in Stockholm. When he receives an astronomical invoice from a random national bureaucratic agency, everything will tumble into madness as he calls the hotline night and day to find out why he is the recipient of the largest bill in the entire country.

MY THOUGHTS:
This narrator never divulges his name, but he's become one of my heroes. His story is a great example of why some of the most memorable books about happiness need to be told in story form rather than self help or non-fiction.

Imagine that happiness is no longer a free commodity. The government suddenly decides to make it a revenue raiser, and citizens are asked to pay for all those moments of contentment and satisfaction we've enjoyed all our lives. Invoices are sent out which carefully take into account every happy moment we've ever lived.

Our hero is gobsmacked that his own bill is astronomical compared to others, since he believes his life is a pretty underwhelming mess. He's a bachelor in his 30s who lives in a modest apartment, and has a part-time job in a video shop. Whenever he tries to argue his case, extra proof keeps rolling in that he's definitely lived a happier life than those with higher profiles and more trappings of success, like his friend Roger.

Maud is one of the company's case workers who tries to help him sort through his paperwork. She finds herself growing more attracted to the hero and his simple philosophy, even as she tries to explain to him why human beings are generally a pretty miserable lot. She also latches onto the ways in which his rosy spin is all in his own head. Given the same scenarios as others, he has a way of maximising his fun and wow factor over simple things.

I enjoyed his desperate attempts to explain why his score shouldn't be so high. He reasons that he's wasted his life and missed out on several experiences he should have chalked up, such as travel, study, marriage, kids and a higher profile career. I couldn't help wondering to what extent we're simply taking cues from the world around us, which tells us that we need these things to inflate our value, and therefore make us happier. It's a good challenge to make sure that our goals and ambitions in life genuinely come from our own hearts, and not those of others.

I love it that a guy like this hero, who never bothers to put himself ahead of anyone else, becomes our role model. He is humble, enthusiastic, and nothing which brings him such genuine pleasure is ever out of our reach either. He represents anyone who can simply gaze outside and enjoy a sunset, wander down the street for an ice-cream, or discuss the merits of a good story. The little things really are the big things, and if we can't be content with them alone, we probably can't be content with more.

Thanks to Blogging for Books and Crown Publishing for giving me a review copy through NetGalley.