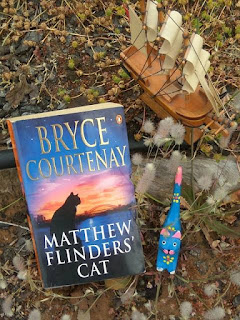 Billy O'Shannessy, once a prominent barrister, is now on the street where he sleeps on a bench outside the State Library. Above him on the window sill rests a bronze statue of Matthew Flinders' cat, Trim. Ryan is a ten-year-old, a near street kid heading for all the usual trouble. The two meet and form an unlikely friendship. Appealing to the boy's imagination by telling him the story of the circumnavigation of Australia as seen through Trim's eyes, Billy is drawn deeply into Ryan's life and into the Sydney underworld. Over several months the two begin the mutual process of rehabilitation. Matthew Flinders' Cat is a modern-day story of a city, its crime, the plight of the homeless and the politics of greed and perversion. It is also a story of the human heart, with an enchanting glimpse into our past from the viewpoint of a famous cat.

MY THOUGHTS:
After reading several British and American books this year, I felt a craving for something completely Australian, which is just what this is. I picked it up at a second hand shop.

Billy O'Shannessy is a drunken ex-barrister who has become a street bum. He still keeps an eye on the world around him and writes letters to the Sydney Morning Herald, because he believes 'alcoholism and writing have a long history together.' He wants to write convincing essays about Australian history and ecology, but never stays sober long enough. However, he does try to do his bit for our country by culling the pesky mynah birds which have overrun and threatened the native species. He has a past which partially explains his dramatic lifestyle change, but desperately tries not to think about it.

Ryan Sanfrancesco is a bright young boy who gets Billy talking about the statue in the library window above his park bench, which happens to be Matthew Flinders and his cat, Trim. Drawing from his knowledge of this legendary ship's cat, Billy intrigues Ryan with true stories from Flinders' own memoirs, that become inspirational to both of them. 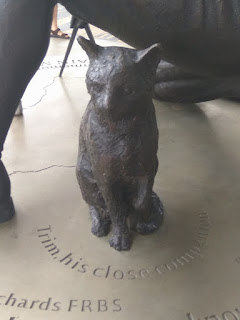 I love how appearances can be deceiving. Billy presents the face of a hopeless alcoholic, but deep down, he's an educated, entertaining storyteller. On the surface, Ryan is a street-smart brat with a bleak future, but really he's an innocent young boy who responds to goodness and heroism when it's presented to him in legends.

Alas, there are those who are suspicious about the friendship between the pair, and even worse, the story delves into a seamy, horrific part of Sydney culture which I won't spoil by mentioning straight out. Suffice to say, it gets to a point where only deep concern for Ryan's welfare is enough to get Billy to clean up his act, since he's really the only hope the boy has. In the process, Bryce Courtenay exposes some abysmal organised crime which is shocking to read about.

Some interesting, fairly recent history is revealed in this novel too, such as the government's attempt to shift undesirables out of the city to Surfers Paradise in the lead-up to the 2000 Olympics. Who would've thought? I really appreciated the glimpse into the vast goodness of charities such as the Salvation Army, in the lives of so many helpless sufferers. It's great to have their quiet heroism featured in stories, when it might otherwise slip under the radar for those of us who don't experience it directly. I felt like giving them a standing ovation.

I noticed that not all reviews of this book on Goodreads and Amazon are positive. That seems to be partly because of the disparate threads. Those interested in following Billy's journey to sobriety might find the Trim stories long and irrelevant, while people who were drawn to the title and cover might just want stories about Captain Flinders' adventures aboard the Investigator, and not care so much about the drinking and crime themes. Yet I think Courtenay really did draw them together. Even though it's a thick book, it's easy to get through the pages quickly, which is a sign of a good flow. 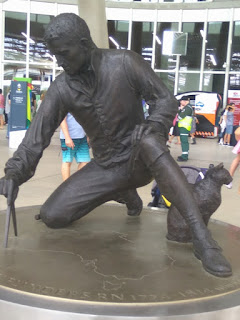 Examining history can reveal a lot about our own attitudes and actions, as Billy discovers when he prepares the different installments of the story for Ryan. The famous cat shows qualities he wishes he could've adopted in his own life, and becomes his inspiration. I found all the different stories interesting and well-written.

Finally, as a fellow cat lover, I love Billy and Ryan partly for their mutual affection for Trim. I quite understand why Ryan would return to the park bench for the second time, to tell Billy, 'I've come about the cat.' The cover of my copy appeals to me. Something about the memory of 200-year-old Trim overlooking the Sydney Harbour seems sort of haunting.

To my surprise, I discovered we have our own statues of Matthew Flinders and Trim here in Adelaide. That's very fitting, since we have our share of landmarks and places named after him, both in the city and around the coast where he navigated. It includes Flinders University, and I took these photos at some remote part of the campus which I doubt I'll easily find again.