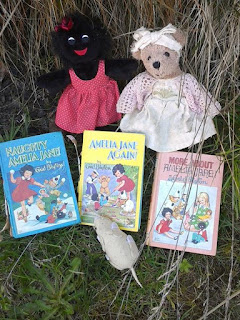 First off, I must tell you that I had a crowd of these in my own bedroom when I was little. When my Dad used to come up to say goodnight, he would tell me stories about what my toys had been up to all day while I was at school. Dad was a toy whisperer. He'd hold their mouths to his ear, and they'd mumble things to him. Deep in my heart I guessed it was all pretend, yet the part of me that wanted to keep an open mind had a lot of fun.

It was cool to think that when they heard my bedroom door open, they'd all scurry back to their spots and freeze. Sometimes I wondered why they'd take such care to keep their lives a secret from the children who loved them so dearly, and I wasted a lot of time trying to coax their stubborn little mouths to speak back to me. It whetted my appetite for more stories about toys set in other people's houses too. Since they are made to represent living beings and be loved by kids, it easy to see why there are so many. We've probably thought how wonderful it would be if they were all true. Although there have been scores of them written over the years, here are ten of my favourites from my own past.


1) Naughty Amelia Jane
She was the big curly-haired doll who always made a point of throwing her weight around and picking on other, more defenseless toys. But the others, led by Golly and Teddy, often paid her back in sneaky ways. And Amelia Jane wasn't so bad at heart. I used to love reading Enid Blyton's toyroom politics. 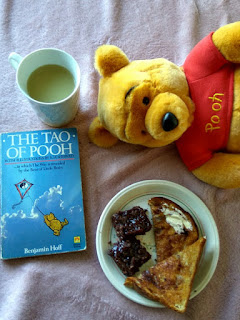 2) Winnie the Pooh
The toys in the 100-Acre Wood belonged to Christopher Robin, and part of their appeal way into adulthood is surely because they each have recognisable personality traits (or disorders). There's little Piglet with his anxiety issues, hyped-up Tigger, clinically depressed Eeyore and control-freak Rabbit. Not to mention Owl with his delusions of grandeur, and Pooh Bear himself, who has the most stable outlook, but still tends to be a binge eater. Someone once suggested that perhaps Christopher Robin is the most disturbed of all, for persisting in talking to them :)

3) Pinocchio
Everyone knows the little wooden marionette was made by the lonely carpenter Gepetto to stand in for a real son. Pinocchio magically comes to life and eventually achieves his dearest wish, to become a real live boy. Not only was it denied for ever so long, but his wooden nose grew longer whenever he told a lie. He was a product of the moralistic fairy tale era he was written in.

4) The Doll's House
This beautiful classic from the fifties is about Tottie and her family, who were owned by a pair of small sisters named Charlotte and Emily. The girls made them a special shoe box home, but one day a snooty celluloid doll named Marchpane is brought to live with them, which is really like putting the cat with the pigeons. The tale is a bit of a tear jerker, but very memorable. (This tale by Rumer Godden is not to be confused with 'A Doll's House' by Henrik Ibsen, which is completely different.) 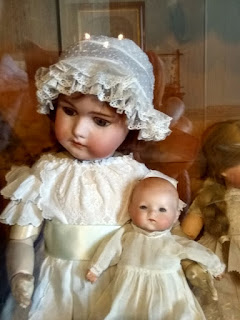 5) Miss Happiness and Miss Flower
It's another offering from Rumer Godden, who must have loved toys. The title characters were two little Japanese dolls sent to England to live with Nona and her cousins. The dolls are very homesick, but that makes them the perfect gift for Nona, who is separated from her family and homesick too. While her cousin Belinda dismisses the dolls as being too boring, Nona carefully researches the features of Japanese houses, so she can construct a replica one for her dolls. This delights Miss Happiness and Miss Flower, and helps Nona come out of her own shell. I loved reading this as a little girl.

6) Teddy Robinson
He was a very special teddy bear owned by a little girl named Deborah, who took him on all sorts of great adventures with her. They had a whole series of fun things happen to them, and the one that sticks in my memory is Teddy Robinson accidentally being left in the garden overnight, and getting soaked through with dew but meeting lots of interesting nocturnal critters. 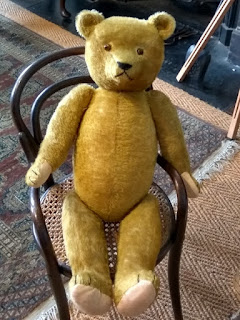 7) Paddington Bear
He's one of the fictional characters who always evokes nostalgia for my long-ago trip to London. He's found by the Brown family at Paddington Station in his duffel coat and hat, sitting on his suitcase with a note saying, 'Please look after this bear.' It seems the first Paddington Bear stuffed toy was made by Mr and Mrs Clarkson in 1972 for their son Jeremy. Yep, none other than the future Top Gear host. It's amazing what bits of trivia I learn when I compile these lists.

8) The Steadfast Tin Soldier
Hans Christian Andersen's fairy tales were often very depressing, and this was no exception. The poor hero was maimed to start with, since he was the last of 25 soldiers to be cast. They ran out of metal, so he stood on only one leg. But he shared that in common with a paper ballerina, who he fell in love with, setting off the jealousy of the jack-in-the-box, who has the little soldier shoved out of the window. After many adventures on a scary canal, he makes his way home again, only to be thrown into the fire. But at least his true love blows in with him. 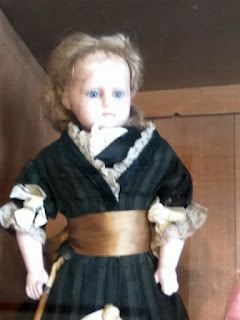 It's a heartwarming short classic about the nature of true love. The little stuffed bunny, forgotten by his young owner, longs to be a real rabbit instead. He later becomes the comfort toy when the boy falls sick, and needs somebody soft to cuddle. But the poor velveteen rabbit is eventually ordered by the doctor to be burned, because by then he's a major germ carrier. As the poor little bunny cries a tear of grief, a good fairy comes and turns him real, since the love of the boy, resulting in his humble shabbiness, earns him that right. Awwww.

10) Toy Story
These movies were a great feature of the nineties. Woody, the little cowboy doll, had been Andy's favourite toy until he was given the spectacular spaceman Buzz Lightyear, who did all sorts of cool things when you pushed his bells and whistles. Poor old Woody couldn't help feeling shoved aside, but their subsequent adventures together proved that there was plenty of room in their master's heart for all his toys. And I wouldn't be surprised if every kid's bedroom was filled with replica toys from Andy's toyroom for quite some time.

Can you add any of your own favourite toy heroes to my list? Did the toys in your own bedroom or toyroom used to come alive too?
Posted by Paula Vince at 6:51 AM