'The Great Divorce' by C.S. Lewis 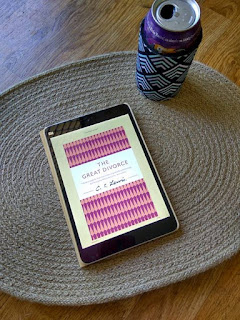 In "The Great Divorce, " C.S. Lewis's classic vision of the Afterworld, the narrator boards a bus on a drizzly English afternoon and embarks on an incredible voyage through Heaven and Hell. He meets a host of supernatural beings far removed from his expectations, and comes to some significant realizations about the nature of good and evil.

MY THOUGHTS:
This is a convicting parable about the next world, beginning with a flying bus trip.

The departure point is a huge, empty grey city that keeps spreading its borders because quarrelsome people only need to imagine a new house, and it's theirs. Some folk are happy to stay there, since they don't recognise it as a type of hell.

For those who do jump on the bus, their choice to settle in heaven depends on their willingness to give up whatever holds the greatest grip on their hearts. It's really all about our idols, and the passengers are filled with all sorts of attitudes and hang-ups which they're loath to relinquish. There's always something they insist on clutching tight, even at the price of misery.

There's 'Ikey' the businessman, who's determined to take plunder from the heavenly realm back down to the grey city, where he thinks he'll make a killing. He only manages to lift one tiny fallen apple through the sheer force of his will.

There's a pathetic society woman whose earthly finery, which she was so proud of, appeared like rags in heaven. She was devastated, because she felt it was her whole identity, which she'd devoted her life to maintaining.

There's a learned man who believes that the grey hell city could really be heaven, for its 'continual hope of morning and field for indefinite progress.' He's an ex-bishop who has written a book. In fact, libraries on earth turn out to be some of the most haunted places, filled with the ghosts of authors who keep wondering if people are still reading their books.

The plight of creative people in this story is interesting. One artist was stressed because he saw no need to paint anymore, since everything was so annoyingly perfect. It's Lewis' warning to creative folk of the trap of being sucked in to pay more attention to their own work and reputation, rather than what it's all about. 'Every poet, musician and artist, but for grace, is drawn away from love of the thing he tells to the love of telling.' Wow, I guess our world does have a way of honouring the conduit, until it's hard for them to stay humble.

One fascinating person in the new land is Sarah Smith of Golders Green, a lady of 'unbearable beauty and grace' with a procession in her honour. The narrator is anxious to learn her identity, but she turns out to be nobody he would have ever heard of. Just a humble person faithfully doing small things in her supposedly ordinary life. But people are regarded differently in heaven to how they ever were on earth. Great news for anyone who's ever felt overworked, unnoticed and under-appreciated.

The narrator, who presumably represents Lewis himself, gets to meet his hero, George MacDonald, who becomes his guide around heaven. I knew Lewis was a fanboy of MacDonald's (see my review of Phantastes) but what a tribute this is, as he tries to find words to tell him all his writing has meant to him, since his teens.

Overall, it's a great read for anyone who'd like a bite-sized, but meaty bit of C.S. Lewis, for it's short enough to read in one day. It leaves me with the impression that I would've liked being a witness when Lewis actually did meet MacDonald.

Here are some quotes.

'What can be called 'the Sulks' in children, has 100 different names in adults, such as injured merit, self-respect, tragic greatness and proper pride.'

'Joy on earth is defenceless against those who would rather be miserable. But in heaven, our light can swallow up your darkness, but your darkness can't affect our life.'