'Strange the Dreamer' by Laini Taylor 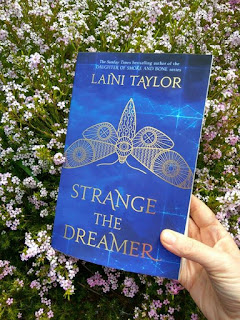 The dream chooses the dreamer, not the other way around—and Lazlo Strange, war orphan and junior librarian, has always feared that his dream chose poorly. Since he was five years old he’s been obsessed with the mythic lost city of Weep, but it would take someone bolder than he to cross half the world in search of it. Then a stunning opportunity presents itself, in the person of a hero called the Godslayer and a band of legendary warriors, and he has to seize his chance or lose his dream forever.

What happened in Weep two hundred years ago to cut it off from the rest of the world? What exactly did the Godslayer slay that went by the name of god? And what is the mysterious problem he now seeks help in solving?

The answers await in Weep, but so do more mysteries—including the blue-skinned goddess who appears in Lazlo’s dreams. How did he dream her before he knew she existed? And if all the gods are dead, why does she seem so real?

MY THOUGHTS:
I saw this lovely cover several times on my Instagram feed, and then spotted it at BigW for a great price. It's one of those times an impulse buy pays off. I'd hoped for something beautiful and surreal with such a title and cover, and that's just what I got.

The first thing I wanted to know was the sense in which the main character was a dreamer. Does the title refer to Lazlo Strange's hopes and ambitions, or his actual, nocturnal dreams when he's asleep? It turns out to include both, in a very fantastic, colourful, and eventually dangerous way.

Lazlo starts off as a war orphan in the kingdom of Zosma, who is apprenticed to work at the library. He's always been intrigued by tales of the lost city of Weep, although after two hundred years of broken contact, everyone else has dismissed the place as a legend. Lazlo is laughed at and treated like a quirky nerd, until a mighty warrior named Eril-Fane arrives, seeking recruits to help restore his city to its former glory.

He enlists mathematicians, metallurgists, engineers, an explosives handler, and Thyon Nero, the gorgeous but arrogant young alchemist. Even though structural experts seem to be in demand, bashful Lazlo is eager to get himself included in the expedition. He must find a way to convince Eril-Fane that his extensive knowledge of folklore and fairy tales might come in handy.

The quest to dismantle a menacing structure and restore daylight to the city is fraught with more peril than anyone imagined, including the offspring of former enemies who were believed purged. When recent history is revealed, it becomes more unclear whether or not Eril-Fane was a hero or a scourge, since both cases can be argued convincingly. And Lazlo meets the love of his life, who has appeared in his dreams before he even knows she exists.

Part of the plot is the most otherworldly Romeo and Juliet re-telling you could imagine. Shakespeare, eat your heart out. It's all so very romantic, and tied in with the tension between acceptance and rejection, mercy or vengeance.

Many things get turned upside down and prove to be their opposite, including Lazlo's status, since his modesty, gentleness and humility make him truly great. I really love all the scenes between him and Thyon Nero. Suspicious Thyon can't comprehend how a person could willingly offer a bully a helping hand with no strings attached. His thinking reflects our own world of ulterior motives. The young men are a fascinating study of opposites. Thyon has by far the most desirable outward appearance, but Lazlo's inner life is far more enviable. Would you rather look good to other people, or stay humble and enjoy your own good company?

A major theme is how war happens when both sides believe they are good people who were in the right. Hate happens when people close their minds and don't allow themselves to see the other side. 'Good people do the sames things bad people do, but call it justice,' says a character who's in the position to know this as fact.

The book ends at a crucial spot, and I'll be snatching up the sequel as soon as I know it's available. Talk about being backed into a corner! The concept of death was a bit disturbing at times. You seem to either dissipate into the ether or... you'll find out. But a third sort of heavenly alternative, 'Dreamer's Weep' is presented, from Lazlo's own head, and I'd love to visit it.

I hope we see more of Thyon Nero too, in the next story. He's seems to have the 'total package' that gives anti-heroes charisma. It includes looks, intelligence, a grudge, a troubled past, and lots of scope for change. 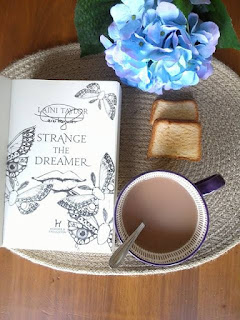 Here's some of my favourite quotes.

Lazlo Strange is referred to as 'the antidote to vile' which is a perfect tribute for a guy whose dreams become an oasis.

'The rules were different in Lazlo's mind. The truth was different. It was nicer.'

'The library knows its own mind. When it steals a boy, we let it keep him.'

'Fairy tales are reflections of the people who had spun them and flecked them with little truths, intrusions of reality into fantasy, like toast crumbs on a wizard's beard.'

'The library had seemed sentient enough to love him back. It bewitched him and drew him in and gave him everything he needed to become himself.'

I once wrote that I find it hard to get into fantasy novels which are set in a different world from start to finish, but this is one of those great exceptions. I'm beginning to think there may be more than I'd imagined. Although I don't read a huge amount of fantasy, many of my favourite novels happen to be fantasies. See that post here. You might also enjoy my thoughts about stories which lie hidden deep within other stories.