'The Picture of Dorian Gray' by Oscar Wilde 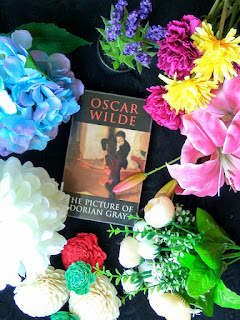 Written in his distinctively dazzling manner, Oscar Wilde’s story of a fashionable young man who sells his soul for eternal youth and beauty is the author’s most popular work. The tale of Dorian Gray’s moral disintegration caused a scandal when it ﬁrst appeared in 1890, but though Wilde was attacked for the novel’s corrupting inﬂuence, he responded that there is, in fact, “a terrible moral in Dorian Gray.” Just a few years later, the book and the aesthetic/moral dilemma it presented became issues in the trials occasioned by Wilde’s homosexual liaisons, which resulted in his imprisonment. Of Dorian Gray’s relationship to autobiography, Wilde noted in a letter, “Basil Hallward is what I think I am: Lord Henry what the world thinks me: Dorian what I would like to be—in other ages, perhaps.”

MY THOUGHTS:
Wow, there are lots of flowers in this story. Lovely scents and perfumes are everywhere. Our hero always seems to be either sniffing or arranging them. Maybe it's all part of his fixation on the transience of beauty, which is partly what this story is all about.

Gorgeous young Dorian Gray has just had his portrait painted by artist Basil Hallward. The charismatic Lord Henry Wotton advises Dorian to enjoy his good looks while he still has them, since they'll start to fade some day. Henry believes physical beauty is the only thing worth having. In a rash moment, Dorian vows that he'd give his own soul if only he could swap places with the portrait and remain stunning, while his image grows old and decrepit instead. To his shock, that's exactly what begins to happen. While Dorian retains his sultry, innocent appearance, the picture bears not only the passing years but the impact of his hard living, bad choices and sinful nature too. 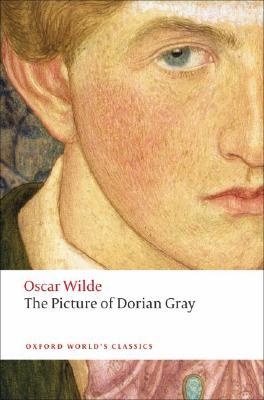 It's sort of a chilling parable, urging readers to give at least a passing thought to the state of our own souls. Dorian understandably hides his painting away from prying eyes, down in the old schoolroom behind a heavy curtain. He's knows it's a visible gauge of what's going on with the state of his inner man. Even though ours aren't as in-your-face as Dorian's, Oscar Wilde's novel challenges us to question whether or not we're concealing nasty secrets of our own. What if our inner lives were made plain to all on some other plane? Could we stand seeing them without flinching? It's not entirely comfortable stuff.

The book is also about true happiness and satisfaction. Henry and Dorian, who become best buddies, live decadent and hedonistic lifestyles, denying themselves nothing. Their basic motto would have to be, 'If it feels good, do it.' FOMO (fear of missing out) seems to drive them. If anything may be rumoured to offer a whiff of pleasure, these guys are out chasing it! While still underage, Dorian wants his guardians to understand that 'unnecessary things are his only necessity.' Yet I wonder if their eventual jadedness and disillusionment have echoes of Oscar Wilde's own. It's pretty clear from the tone of the story that he must have been on the same wavelength as them. He was a celebrity of his time, not only for his writing but for being at the forefront of the Victorian 'dandy' movement in London. Was it all it was cracked up to be?

He mentions 'tedium vitae' which is Latin for the weariness of life that comes on those to whom life denies nothing. Few of us get the chance to live as if time or money are no object, so it's probably a revealing experience to wallow from time to time in the lives of those who can. (And 'wallowing' is an apt word for getting into Henry's and Dorian's head spaces. You don't want to spend too long there, believe me. Their luxury and leisure are appealing up to a point, but we soon want out.)

The nature of a bad influence got me pondering. Plenty of innocent folk are corrupted during the course of this novel. From the start, Henry quickly steers Dorian to an unsavoury, self-indulgent lifestyle. In turn, the beautiful and fascinating Dorian Gray gains a reputation for ruining the lives of anyone who gets close to him. Of course, both Henry and Dorian deny that they have such power. They believe there must be some latent evil in the souls of the others in the first place, to be led astray. 'Like responds to like,' is how they explain the phenomenon. It does beg the question of whether some people are more corruption proof than others. In a way, blaming Henry and Dorian may be a cop-out for not taking responsibility for their own poor decisions. But on the other hand, there definitely was a pattern. It seems hanging out with those two was really putting the strength of a person's moral integrity to the test. Maybe the book says something about the fragility of human nature. Wilde was asking, 'Are you sure your high principles are rock solid?'

Henry and Dorian enjoy an enduring friendship, yet I wouldn't want them on my list of best literary bromances. There's something a bit creepy and corrupt about it. In the first place, Henry wanted to get his unscrupulous clutches into Dorian, to discover to what extent he could influence him. Even well into their relationship when he admires him intensely, there's something self-congratulatory about his feelings. Henry has created a monster, albeit a very nice looking one. 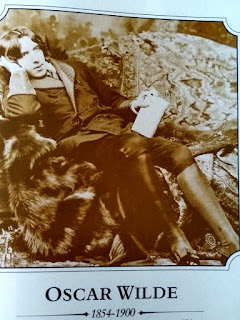 I couldn't forget the author as I was reading his book. Reading Dorian Gray makes me feel very sorry for what Oscar Wilde was forced to endure in his prison years. To go from sliding out of satin sheets after midday to two years of intense physical labour would have to be rough. No wonder it contributed to his early death.

I always like to finish off with some quotes, and as Oscar Wilde was a renowned wit, there are plenty to choose from.  But you've got to take them tongue-in-cheek in a story like this. We get plenty of dodgy, questionable advice from Lord Henry Wotton, but most times it's nothing readers should really take on board. Dorian did to his peril.

Henry: To get back my youth I'd do anything in the world, except take exercise, get up early and be respectable.

Henry: One should never make one's debut with a scandal. Save it to be interesting in your old age.

Henry: Murder is always a mistake. One should never do anything that one cannot talk about after dinner. (Maybe some of his advice is pretty sound, on rare occasions.)

Overall, if you think it doesn't matter what's bubbling away under the surface, as long as you look good, think again. The proverb not to judge a book by its cover is really brought home in this particular book. It's also an interesting glimpse of the decadent movement in what they used to call the 'naughty nineties.'

The Picture of Dorian Gray is also on my lists of Stories that Feature Beautiful Portraits and Greatest Narcissists if you'd like to check them out.