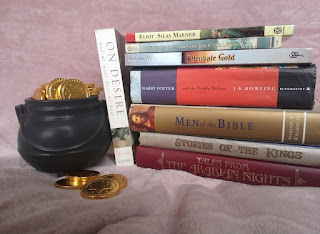 Gold has fascinated people from ancient times. It draws attention to itself by its wonderful lustre and sheer weight. On holiday with my family, we visited a quarry where we got to hold a small solid gold ingot. It felt so heavy in my hand! It was a thrill to hold the stuff that legends are made of. We all know that if we manage to make it to the end of a rainbow, there might be a pot of gold, and that the streets of heaven are paved with it. It's always been regarded as the celebrity of all gems, and the following stories show what people were willing to risk to get their hands on some. I think gold represented ultimate prosperity and the chance to relax in times when you had to almost work until you dropped just to keep from starving. Some of these stories are hundreds of years old.

1) Rumplestiltskin
A poor girl suffers for her silly father's deception. He claims that she can spin straw into gold, so the greedy king locks her up until she can prove her father's boast to be true. And if she can't, it'll be off with her head. An opportunistic little imp who can perform this feat of alchemy comes along to save the day. He exacts a harsh penalty for his help, demanding her first born child, but when the time comes, she manages to outsmart him.

2) Jack and the Beanstalk
After nearly getting himself served up in a giant's casserole, you might think our hero would consider himself lucky to have escaped with his life. Jack is made of tougher stuff though, and knows that this giant has something that would keep his mother and himself prosperous all their lives. That's the goose the lays the golden eggs. That bird was almost worth getting himself skewered again to run back for.

3) Ali-Baba and the 40 Thieves
He's a poor woodcutter who discovers that the simple phrase, 'Open Sesame' will allow him to enter the opulence and splendour of a thieves' den. Ali-Baba instantly sets about robbing the robbers. (The heroes in the Tales of the Arabian Nights weren't necessarily honest or nice guys.) His exploits almost get him murdered, and cause the death of his nasty older brother Cassim. But with the help of his clever female servant, Ali-Baba wriggles out of trouble and enjoys the benefits of that gold for the rest of his life.

4) Jason and the Golden Fleece
The fleece belonged to a winged ram who surely must've had trouble walking or flying beneath its weight. Jason is challenged by his wicked uncle Pelias to get hold of the fleece, if he hopes to win back his father's throne. Pelias thinks it'll be an impossible, maybe suicidal quest. But with the help of his awesome team of heroes (the Argonauts) Jason survives several potentially fatal adventures to bring that golden fleece home.

5) The Ark of the Covenant
Both the Holy Tabernacle and the Ark of the Covenant were crafted with some of the best materials the earth could offer, including plenty of gold. Not only was this most sacred chest made of gold, but contained among other things, a gold pot of manna. Searches for the historical item of such significance have become legendary, but I sure wouldn't want to be the one to find it. When the Philistines captured it during Samuel's time, they experienced such bad luck that they sent it home. And remember what happened to poor Uzzah, when he stretched out his hand to steady it while it was being transported on an oxen cart under King David's orders. It's extreme holiness was not to be taken lightly.

6) The Baby Jesus
A stash of gold was among the gifts the Magi brought across the desert to present the baby they knew would grow up to be the Messiah and King. It was a mark of their highest respect. Do you ever wonder what Joseph and Mary did with it? Shouldn't it have helped transform their economic status, along with the frankincense and myrrh? Perhaps they needed it to finance their flight across Egypt and later setting up a carpentry business in Galilee. They never came across exceptionally wealthy at any stage.

In a spiritual sense, some stories contain the sober reminder that the love of all treasure, including gold, may even be corrupting. Here are some tales which show the negative side of the emotions gold may elicit, including greed and covetousness.

7) King Midas
He was the man who was granted what many others might have longed for. Everything he touched turned to gold. But poor Midas soon discovers the down side to this incredible gift, when he accidentally transforms several things he would've preferred to keep in their natural state, including beloved family members. His sad plight is meant to remind us that some of the blessings we all enjoy every day are far more valuable than gold.

8) The Voyage of the Dawn Treader
On one of the islands explored by the crew, a solid gold statue lies at the bottom of a clear lake. They realise in the nick of time that the water turns whatever it touches to gold. The poor chap had jumped in for a swim. Caspian and Edmund almost fall victim to the greedy thoughts this lake stirs up, but come to their senses when Lucy tells them off.

In the same book, poor Eustace chances upon a dragon's cave while walking by himself. He puts a gold bracelet on his wrist and falls asleep making plans to return for more plunder. But when he wakes up, he's turned into a dragon. The narrator puts it this way. 'Sleeping on a dragon's hoard, with greedy, dragonish thoughts in his heart, he had become a dragon himself.' It could only happen in Narnia.

9) Silas Marner
For 15 years, the lonely miser brooded over his crock of gold sovereigns, counting and caressing each coin. Then one evening, it's stolen from him while he's out of the house. Silas suffers a huge wrench as his gold was his whole life, heart and soul. But when a living gift appears by his hearth, he comes to realise that his gold held a position in his life which it shouldn't have. My review is here.

10) The Golden Calf
Not all biblical incidents regarding gold are positive. There was an unfortunate event in the wilderness years when the High Priest Aaron caved in to people's demand for something to worship. He asked for all their gold jewellery to melt down, and formed it into the image of a golden calf which fitted their criteria. When Moses came down from talking to God on the mountain, he was furious, and forced the people to eat the re-melted gold as part of their punishment. It proves what a mighty leader he was. Imagine one man forcing a crowd of that size to swallow gold.

11) The Australian Goldrush Era
My country has its own colourful history, when a whole lot of folk desperate to improve their quality of life went wild for gold in the mid nineteenth century. Men from all walks of life became miners overnight, crossing the Victorian borders in search of the elusive nuggets. Towns such as Ballarat, Bendigo and Ararat were built up around the gold industry. While fortune smiled upon some, others remained destitute. Novels set in this time period are interesting. Clara Morison was written by an author who actually lived during the time period, Catherine Helen Spence. And Ellenvale Gold, by my friend Amanda Deed, is a great read. When gold is discovered on Miss Penny Worthington's property, it brings out all that's inside the hearts of various characters, whether it be greed, sneakiness, helpfulness or heroism.

Do you have any other gold stories to add to the list? Or any favourites, which may even be from mine above? Have you had a chance to get up close and personal with gold yourself? My kids used to love visiting Sovereign Hill in Ballarat, where they did some gold panning. We were told it might still flow in those streams, and did see a glimmer or two in the pans :)