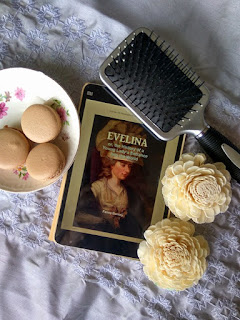 Frances Burney's first and most enduringly popular novel is a vivid, satirical, and seductive account of the pleasures and dangers of fashionable life in late eighteenth-century London. As she describes her heroine's entry into society, womanhood and, inevitably, love, Burney exposes the vulnerability of female innocence in an image-conscious and often cruel world where social snobbery and sexual aggression are played out in the public arenas of pleasure-gardens, theatre visits, and balls. But Evelina's innocence also makes her a shrewd commentator on the excesses and absurdities of manners and social ambitions--as well as attracting the attention of the eminently eligible Lord Orville. Evelina, comic and shrewd, is at once a guide to fashionable London, a satirical attack on the new consumerism, an investigation of women's position in the late eighteenth century, and a love story.

I chose this novel as my Pre-1800 choice in the 2017 Back to the Classics challenge, since it was published way back in 1778. Frances Burney wrote Evelina anonymously at a time when novel writing (and reading) was frowned upon. I was thinking, 'I'll bet this was the sort of novel young girls were warned not to read.' I can guess how parents of that time might have found it time wasting. Burney's language has old fashioned charm, but her subject matter is pretty lightweight. Even when I'd got a few hundred pages into it, the storyline seemed to be nothing but socialising and trying to dodge the attention of annoying dudes. Several times I almost didn't finish. Not only was nothing much happening, but none of the characters grabbed my sympathy or liking. In fact, several of them were incredibly obnoxious.

Here's a quick summary. Evelina has been brought up by the elderly Reverend Arthur Villars, because her mother died giving birth and her father disowned her. She should have been an heiress of two fortunes, but instead, she's an unknown country rustic. However, family connections want Evelina to make her entrance into the world. Her French grandmother plans to win her fortune on her father's side by proving that the bounder was indeed married to her daughter. Evelina, who's been sheltered and innocent, has no idea about the predators and potential corrupting influences she'll find in the big city. The story is told in letters, mostly from her to her beloved guardian.

We're told part of her problem was 'too much beauty to escape notice, but too little wealth to be sought.' I've got to say, most of the men are depicted as complete shallow twits. They all fall head over heels in love with Evelina at first sight because she's pretty, without knowing or caring what sort of person she is. There are bullies, misogynists, philanderers, creeps and crashing bores. Fanny Burney sure knew how to create unflattering male characters, but I'm not sure that's a good recommendation for her book. These days, Evelina could get a restraining order against a pain in the neck like Sir Clement Willoughby.

One shining exception is Lord Orville, who Evelina thought could do no wrong. She had a huge crush on him from the very start, and called him, 'one who seems formed as a pattern for his fellow creatures.' Whoa, that's strong praise. Would you give your husband or boyfriend such a sweeping compliment? In Orville's case, perhaps it was true though, when you consider his competition.

The eighteenth century would have been a tough time to be alive, because everything had to be a certain way. It was a real cookie cutter generation. You probably wouldn't hear any advice to 'be true to yourself.' They'd be more likely to say, 'Do what she's doing.' You were obliged to be feminine or masculine, according to your gender, and the rules were unbending. Both Evelina and Villars find Mrs Selwyn's tendency to use sarcasm and satire too forward and manly, whereas nowadays, we'd be more likely to accept that this is just her nature.

It seems you didn't have to step too far out of line to be considered low-bred or vulgar. Both Evelina and Orville were disgusted when three young men had a conversation about eating, including their extensive knowledge of sauces and dressings. To them, they came across as gluttons and epicures. To me, they might have been discussing a reality cooking show on TV, and I might've even joined in.

And then there's Evelina's newfound cousins, the Branghton siblings, who she cringed to be seen with. She was anxious to get rid of Sir Clement, yet still ashamed to have him see her with them. Okay, here's my confession. They didn't seem bad enough to warrant that sort of snobbery. If you've ever read this book, haven't you come across far worse people than the Branghtons? But Evelina knew the Regency social cues and I don't. If I managed to catch a time machine to that era, I'd probably be an outcast in a flash.

If you make it to the end, the story turns into a sudden soap opera with all sorts of stunning family revelations I thought were hilarious. For any other book I'd say, 'Come on, no way!' For this one though, my reaction was, 'Something's happening at last.' I'm not overly impressed with Fanny Burney's work based on Evelina, which is said to be her best. She might've been revived for a few reasons. The age of the book alone gives it a sort of hallowed charm, and she's also someone Jane Austen used to read. It's probably a sort of second hand fame, but I'd rather stick to Jane from now on. One thing I took from this book is that long, rambling small talk you can't escape from was just as tedious in the eighteenth century as it is in the twenty-first.

But to finish off with, here are some quotes. As there were so many pests, I'll grab a couple from them just to show what Evelina had to put up with.

Sir Clement Willoughby: I'm no advocate for hats. Where there is beauty, they only serve to shade it, and where there is none, they excite a most unavailing curiosity.

If you think that's bad, how about this one, from his friend?

Lord Merton: I don't know what the devil a woman lives for, after thirty. She is only in other folks' way.

Okay, let's mix it up with a few nicer ones.

Evelina: My intentions are never willfully blameable, yet I err perpetually. (There's one thing I have in common with her.)

Villars: A youthful mind is seldom totally free from ambition; to curb that is the first step to contentment, since to diminish expectation is to increase enjoyment. (That's probably the best line in the whole book, and it was over within the first few pages.)

I felt inclined to give it three stars just because it's the oldest book by a female author I've ever read, but no, I've got to stick true to my ranking criteria, and I really felt like giving up many, many times.