'The Help' by Kathryn Stockett 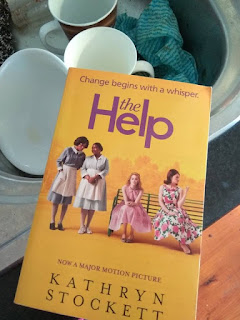 Twenty-two-year-old Skeeter has just returned home after graduating from Ole Miss. She may have a degree, but it is 1962, Mississippi, and her mother will not be happy till Skeeter has a ring on her finger. Aibileen is a black maid, a wise, regal woman raising her seventeenth white child. Something has shifted inside her after the loss of her own son, who died while his bosses looked the other way. Minny, Aibileen’s is short, fat, and perhaps the sassiest woman in Mississippi. She can cook like nobody’s business, but can’t mind her tongue, so she’s lost yet another job.

Seemingly as different from one another as can be, these women will nonetheless come together for a clandestine project that will put them all at risk. And why? Because they are suffocating within the lines that define their town and their times. And sometimes lines are made to be crossed.

MY THOUGHTS:
I'm late on this book's bandwagon, but bought a copy from a second hand shop and finally got around to reading it. I get anxious about starting books with themes of racism. There's bound to be deep sadness, and in our current era of strict political correctness, do these stories even apply the balm of kindness we all need, or simply act as a match to a highly charged tinder box? There's no point trying to heal a deep wound by always picking at the scars. So I was nervous going in, but it turns out I needn't have been. There's a lot to love about this To Kill a Mockingbird/Upstairs Downstairs hybrid. It's all about being a good and decent person.

The story is set in Jackson, Mississippi in the early 1960's, when racial discrimination was still as ugly as ever. It seemed the only real job prospect for a coloured woman was a maid and cleaner, and there were many white women demanding their service. 'The help' would basically bring up the children of their snooty employers, who then wondered why their kids preferred the hired people. Most folk accepted the status quo, until a trio of women rocked the boat with a top secret assignment, proving that the written word can pack a powerful punch.

White girl Eugenia (Skeeter) Phelan is upset when her beloved family maid Constantine is fired while she's away at college. It prompts her to consider writing a book full of interviews with coloured maids, but it's hard to find any takers for such a subversive act. Especially because coloured people are automatically suspicious when white folk are nice to them, with good reason. But eventually she gets Aibileen and Minny on board, who have been pushed far enough to realise that the time is ripe for speaking up.

These three narrators switch frequently throughout the story, and it's done so well that that when each one ends, we shake our heads moving on to the next, but are soon hooked by that thread too. It's all about cleaning and childcare of course, but has suspense and mystery. Why must Minny hide her presence from her boss's husband? What was the big surprise Constantine had in store for Skeeter, which she never discovered? Will Aibileen ever be caught when she tries to build up the confidence of Mae Mobley, the little daughter of her employers?

Skeeter becomes one of those self-sacrificial writers who are called to put everything on the line, although she never sets out to be. Her bright idea begins as nothing more than a brainwave to help further her own career prospects. Yet it soon becomes evident to her that pursuing it might mean losing everything else important to her. Such a lot is stripped away that her only reason to continue has to be belief in the cause itself. For her more than anyone else, it's very much a personal growth story.

Minny's part of the story is very cool. She's one of the most indignant and wronged people of all, but finds herself disarmed by her new employers, Celia and Johnny Foote, who don't fit into the pattern she's grown to expect from white people.

The villain of the piece is Hilly Holbrook, a young trendsetter who many other white ladies look to for cues as to how to think and behave. She's trouble on two legs; in a perfect position to use her social power for kindness, but choosing prejudice and meanness instead. Minny says that Hilly is sent by the devil to ruin lives. She's the sort of nasty girl who seems sweet on the surface, but spells disaster for anyone who crosses her. It's fun for readers to hate Hilly, and speculate who she'll push too far.

My favourite character, who provides the overall tone of kindness and love, is Aibileen. I'd love to be on her prayer list! They have a proven track record. She always writes them instead of speaking them, because a teacher once challenged her to keep reading and writing every day. Her own faith surely adds to their power, since she considers them to be like electricity that keeps things going. That's why she carefully considers whether it's worth the risk of adding any new folk, like Miss Skeeter. And Minny adds, 'We all on a party line to God, but you sitting right in his ear.' What a wonderful inspiration for all of us readers to think of prayer the same way, and that might be one of the best takeaways from the whole book.