Stories with Libraries and Librarians 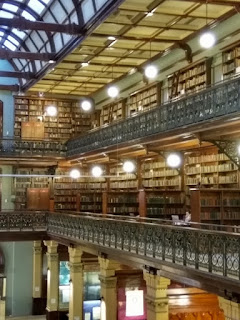 Libraries are among my favourite places to visit. They may be quiet and leisurely on the surface, but what can be more exciting to a bookworm than thousands of tantalising spines on shelves, whose titles all seem to cry, 'Choose me'? And what could hold more compressed fun and wisdom from generations of thinkers? In The Great Divorce, C.S. Lewis imagines them as places where the anxious ghosts of dead authors hover to see if people are still reading their books. I wouldn't be at all surprised. Anyway, I believe a library probably has more potential to change an individual's life than a therapist's office.

Here are some of the best libraries I've come across in the pages of books. The sample I've chosen is very appealing (except for the scary ones!) and will hopefully bust the stereotype of librarians as cross little old ladies with tight buns who always say, 'Shush.'

I'll start my list with a few impressive, historical and literary libraries.

1) The Great Library of Alexandria
Julius Caesar was the bad guy in this true story. This wonderful centre of knowledge stood in Egypt in the 3rd century BC. It was one of the most significant libraries in the world, dedicated to the Muses and full of papyrus scrolls. Perhaps that's why it caught fire so easily, when the Roman army set their torches to it. Even though it hasn't existed for centuries, this library is one of the most famous symbols of the pointless destruction of culture, making future generations of readers and scholars groan.

2) The Name of the Rose
Any reader of this medieval whodunit would fancy a jaunt through this library. It sits in a fortified tower of the Abbey in the form of an impossible labyrinth which only the librarian and his assistant may enter. Other monks must send requests for the books they wish to read, which are only granted if the librarian thinks they're justified. Needless to say, he wields quite a bit of klout.

But libraries from fantasy stories may be some of the most appealing to our curiosity and wonder.

3) Phantastes
This library in George MacDonald's wordy classic is one I'd love to visit if I could be sure to get hold of the right books. The hero, Anados, discovers that they draw you into their pages so that all of your five senses feel as if they're experiencing exactly what you're reading about. That takes interactive books to whole new level. (Click for more about this classic)

It's located off a corridor on the first floor, and contains thousands of shelves of magic books for students to borrow, under the watchful eyes of Madam Pince. Only the Restricted Section is off bounds, especially to younger students, with the rare and dangerous secret knowledge it holds. It's the only spot in school which ever tempts Hermione Granger to break the rules, which she does whenever something really important needs to be researched. Anyone sneaking around in there without permission needs to handle the books very carefully, since some of them are jinxed with spells that might make them snap or scream.

5) Mr Norrell's Library
The wily old owner of this library has made sure it's one of a kind. Determined to be Britain's only magician, Mr Norrell has taken pains to acquire all the out-of-print old books of magic he can get his greedy hands on. There are thousands of rare gems, and nobody else can even find their way to his library, let alone read anything, since he's jinxed the route with several false passages. Norrell's frustrated former student Jonathan Strange gets his own back in a fit of temper by re-arranging the passages so that for one terrifying hour, Norrell can't find his way to his own library. (Here is my review.)

6) The Library at Mount Char
It's a sinister tale in which a ragtag group of vulnerable orphans are adopted by a formidable being known to them as 'The Father.' His library holds the secret to his power, and he forces the children to become specialist librarians, each mastering one particular area of knowledge.

It's not books stored in this creepy subterranean library but human souls in jars, for other Peculiars to borrow in their time of need. The evil megalomaniac Caul wants nothing more than to get his hands on them all for himself, and forces our hero Jacob Portman into the library with him, since Jacob's special gift means he's the only one able to see the jars. (My review is here.)

8) The Librarian
Perpetual student Flynn Carsen has no idea what he's in for when he applies for a job at the Metropolitan Public Library. He's hired to protect several magical and historical artifacts such as Pandora's Box and Excalibur. It's perhaps your ultimate responsible job. A serious theft has left Flynn dashing desperately across the world, relying on his extensive book knowledge to save the day.

9) The Time-Traveler's Wife
Henry deTamble is a librarian who has a genetic condition which forces him to travel to different stages of his own life, leaving just a pile of the clothes he was wearing behind him. Luckily for him it never seemed to happen in the library while he was making a presentation to special interest groups. (Here is my review.)

Here's a couple of appealing stories that feature quite normal libraries, and the impact they have on the characters. Some of them are more obscure stories which I've enjoyed.

10) Beyond all Dreams
This is a sensitive story about a research librarian named Anna, who archives maps. She notices some inconsistencies in a document about a shipwreck on which her father supposedly drowned. Making a report turns out to open a tinder box of nasty facts which people in high places would have preferred to keep hushed up. Anna's experience proves that on rare occasions, a librarian may actually be a hazardous occupation. (I've reviewed it here)

Another heroine who made a similar discovery was Alice, a timid bookworm who hated taking risks. But when her library job forces her to deliver some boxes of donated books to a tiny hillbilly community, she's roped into being a mobile librarian who must visit potentially cutthroat and dangerous places on her rounds.

12) Pollyanna's Western Adventure
It's one of the charming adventures of glad girl Pollyanna which has sadly gone out of print, but there are probably still a few old volumes floating around. One is in my bookshelf, since my mother owned it as a girl. Pollyanna's little family is forced to go and live out in the sticks for her husband Jimmy's job as an engineer. She gets the opportunity to set up a lending library from the books she brings from home. The locals are always glad to see her coming, and no wonder. A smiling, friendly face combined with a load of books would have to be a winning combination.

13) The Ladies of Ivy Hill
In this village chronicle, a small lending library is set up by Miss Rachel Ashcroft. She's never been a reader, but all her father has left her in his will is his huge collection of books, so she feels forced to make the best of an undesirable situation. Of course we book lovers know that having lots of books around isn't a bad thing at all, and wait for her to find out too. (See here for here.)

14) All of a Kind Family
This vintage kids' series is about five young sisters ranging in age from 4 to 12. When Sarah, the middle girl, loses a library book, she and her sisters go cringing to the librarian, expecting her to be a dragon who will severely punish them. Instead, they're relieved by her kindness and come out with a renewed zeal to borrow books.

I've saved one of my favourites until last, because it pulls together such a lot of elements that make library stories so great. It's a fantasy novel which makes the benefits of a good library clear for anyone who has the curiosity and nous to use it well.

15) Strange the Dreamer
The hero is surely one of the cutest young librarians to be found in any story. Lazlo Strange was a 13-year-old war orphan apprenticed to work at the Great Library in the Kingdom of Zosma, which is described as a haven for poets, astronomers and every shade of thinker between. The wise senior librarian Master Hyrrokkin said, 'The library knows its own mind. When it steals a boy we let it keep him.' A few years later when he's grown up, the sweet little bookworm must convince a mighty warrior that his own nerdy, bookish knowledge will come in handy for a great expedition. (And here is my review.)

I know my list of literary libraries is probably just scratching the surface, so if I've overlooked any good ones you can think of, please add them in the comments.