'Little House on the Prairie' by Laura Ingalls Wilder 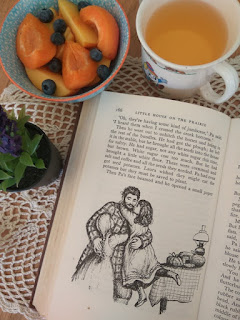 This year, I'm hosting a read-along of all of the Little House on the Prairie Books by Laura Ingalls Wilder, which you'll find here. We'd love you to read along and share your thoughts, if you feel so inclined. I haven't included a sign-up sheet of any sort, but kept it all very informal. Here we're up to the month of February.

The adventures continue for Laura Ingalls and her family as they leave their little house in the Big Woods of Wisconsin and set out for the big skies of the Kansas Territory. They travel for many days in their covered wagon until they find the best spot to build their house. Soon they are planting and plowing, hunting wild ducks and turkeys, and gathering grass for their cows. Just when they begin to feel settled, they are caught in the middle of a dangerous conflict.

MY THOUGHTS:
It's Laura's second book, in which she writes about another year in the life of her family. They are off in their covered wagon to settle in Indian Country, because the Big Woods are now too crowded for Pa. He's lured by the promise of a treeless, level country with thick wildlife, and she describes the fertile openness and solitude of the wide prairie beautifully. Their small family unit gets along well together, savouring the little things. When Ma presses each loaf of cornbread flat for the coals, Pa says he wants no other seasoning than her hand print :) And in return, she calls the comfort of the bed and rocking chair he makes her, 'almost sinful.' Getting squares of glass for their windows is cause for a family celebration, and the girls' joy knows no bounds when they get tin cups, candy canes, little cakes and coins for Christmas.

However, Laura continues her own private quest to match the perfection of Mary. When she feels shown-up, her natural instinct is still to lash out with a slap, but she's learned that's strictly forbidden. (See Little House in the Big Woods.) She decides to muster her willpower to compete instead, but it's a losing battle, because Mary has set the bar so high. For all her good intentions, poor Laura crashes and burns at times, such as the moment she yearns for Pa to bring her a little, black-eyed papoose.

But chinks in Mary's exemplary exterior show through in this book, proving that she's only human like the rest of us. A great example is her tendency to freeze up and become helpless whenever she's scared. Poor Mary. 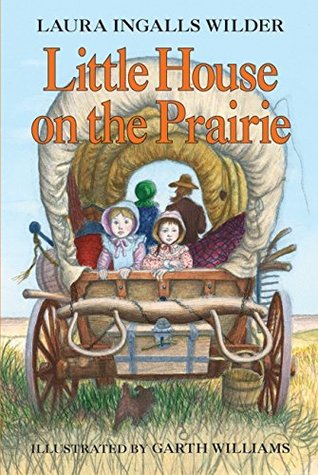 Heroes show up in the unlikeliest, most remote spots, including men who saved their lives outright. There's Dr Tan, the negro doctor who cured them from malaria, and Soldat du Chene, the tall, French-speaking Indian from the Osage tribe who talked thousands of others out of murdering the settlers. Pa himself always rises to the occasion, such as dragging unconscious Mr Scott from the bottom of the partially completed well. (Perhaps sinking to the occasion is more accurate in that example.) And one of my favourite heroes is Mr Edwards, the bachelor and legend who cared so much about making Christmas special for two little girls that he risked his life to swim across a raging creek to bring them presents from Santa.


But although it's another beautiful family tale, modern readers can't ignore the elephant in the room. The Ingalls family was involved in something pretty dodgy. The government had promised to clear the Indians out of their ancestral land to open it up for settlers, and Pa put up his hand to say, 'Yes please!' Arguably what he should have said was, 'No thanks, being part of something so unethical would hang heavily on my conscience for the rest of my life.'

He does come across as respectful of their culture and optimistic that they could all get along. He probably reasoned that they were all human, but that's like goldfish setting their aquarium among sharks because they're all fish, or canaries nesting among eagles because they're all birds. To imagine that two distinct communities with alien values and poles-apart cognitive habits can suddenly live side by side is a recipe for disaster. Even though Pa is careful to treat them courteously, there's always a sense that he's just waiting to be rid of them. 'Indians are always moved on,' he says. Or, 'They should have the sense to know when they're licked.'

I wonder if he ever considered how he'd feel if the Indians were given a mandate to lob in the middle of the Big Woods of Wisconsin and start pushing his extended family back. But failure to consider somebody else's former claim was characteristic of many nineteenth century settlers.

The voice of westernisation may be best expressed by their neighbour Mrs Scott. 'They won't do anything with the country themselves but roam around in it. It belongs to folks that'll farm it. That's only common sense and justice.' Even her assumption that farming is better for land over time than leaving it in its lush natural state is pure colonialism. It's easy to see why the Native Americans were incensed by this form of 'justice.'

So there's an ominous thread running through the whole story, all because the white settlers didn't 'Do unto others', although it never occurred to them that they should. The Ingalls' are living in the land of their fondest dreams, but have to put up with an Indian path running close by their house. Poor Jack the bulldog has to be permanently chained to the house, and Ma must get used to interlopers casually wandering into her home to steal whatever they please. Keeping important supplies in a padlocked cupboard is just a band-aid solution for the deeper, more sinister problem. There's always a sense that the uneasy truce won't last forever.

How frightening it was when the Indians' antagonism reached boiling point. The vulnerable Ingalls family sat in their tiny house surrounded by savage war cries, knowing full well how defenseless they'd be against a crowd of warriors bent on massacre. Six-year-old Laura remembered it like this. 'A nightmare is not so terrible as that night was. A nightmare is only a dream, and when it is worst you wake up. But this was real and Laura could not wake up.' She, Mary and Carrie would have been the most innocent victims had the worst occurred, as they were brought unwittingly to live there by the parents they trusted.

My heart ached for the terrible blow inflicted on Pa and Ma, when they were compelled to leave their nice little home with its freshly planted garden behind. For a man whose mottoes included, 'Better to be safe than sorry,' perhaps moving there in the first place wasn't one of Pa's finest ideas. But I'm sure they were well aware how lucky they were to have escaped with their lives. And their natural optimism is still shown to be firmly intact at the end.

Ma: A whole year gone, Charles.
Pa: What's a year amount to? We have all the time there is.

Next up will be Farmer Boy.