The Stories make the Aussie 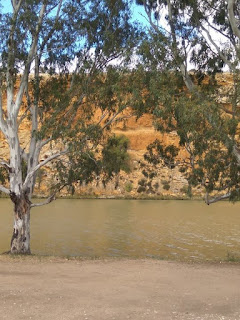 It's Australia Day, and I've been reflecting about those brave and daring ancestors who first settled our country. Several years ago, my father was researching his genealogy and writing it out by hand. He managed to delve back a long way and there were hundreds of pages, which he asked me to type for him and maybe give a bit of polish as I went. It turned out to be a really interesting experience. For example, one of his British grandfathers in the late 1700s (I forget how many 'greats') always wrote down his profession as 'auctioneer' and it turned out the commodity he dealt in was slaves.

I must be a thorough Aussie girl because ancestors from both sides of my family seemed to be arriving thick and fast as far back as the 1830s and 1840s, when South Australia was first settled. There were devout German Christians on my mother's side, who needed to escape religious persecution in their homeland. They were among the first to settle in the Adelaide Hills. And on my Dad's side were all sorts of respectable tradespeople from Britain who were finding it impossible to make ends meet in the old country and were lured by the stunning advertisements about the Great Southland which sounded too good to be true. Okay, there may have also been a few dodgier characters too, like that 'auctioneer' I mentioned.

Once I took my younger children to look through Adelaide's Migration Museum, which turned out to be a fascinating experience. On the wall was an old poster singing the praises of South Australia's open countryside and warm climate. Even then, it proudly advertised the place as the only convict-free state. I stood reading it, knowing that many of my direct ancestors had been desperate enough to accept the challenge.

One of the ancestors Dad had plenty of info about was a nineteen-year-old named George Peter Hammond, who'd read those adverts and decided he fitted the bill they were looking for; young, fit, able-bodied and willing to work. He booked himself passage and said goodbye to his parents and younger siblings, intending to write and let them know if the place looked any good, so they could consider coming too. Dad ended up with many details about his ship journey down south to the other side of the world, including the sharks the crew caught for everyone on board to eat.

As I typed it out for him, I had this thought occur to me. That young man probably considered that he was acting independently, doing something off his own bat that affected just himself. Yet I wonder if he had the foresight to realise that his personal decision would end up shaping and molding the lives of literally hundreds of people still to come. I am one of them. So is my husband. So are my children and their future spouses. If that young adventurer hadn't decided to book himself passage to check out the new land, I wouldn't be an Aussie girl at all. As it turned out, the rest of his family did decide to join him down the track. And the rest of their story, for me, is now history.

When I was 20, I took a break from Uni and traveled with my parents for a driving tour around Britain. I felt a link and affinity with it, considering it our Motherland even after the passing of more than a century. It was wonderful to travel around, seeing landmarks where historical events had taken place, visiting the homes of great writers such as my beloved Bronte sisters and Jane Austen, and finding where our own ancestors had lived. But by the time our months there were over, I was happy to return to Heathrow Airport to head for home again. Because of the God-guided decisions of many people before me, something out of my control had been set in motion for me long before I was born. It is that in spite of all that ancient Prussian and Anglo Saxon blood flowing in my veins, I am an Aussie.

I wish every Aussie a great Australia Day, as you may even take the opportunity to stop and reflect on the events that led to you being an Aussie too. Remember that the settlers who came were bold and resilient, so we have that in our DNA. And if you are an international reader, spare us a thought on January 26th and consider reading some of the Australian books I've either written, helped write, or recommended on this blog over the years.
Posted by Paula Vince at 9:25 AM