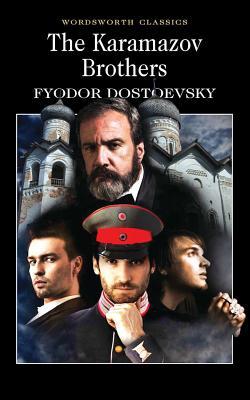 I'm working hard to increase my list of obscure heartthrobs, and thought I'd begin 2018 by searching through some of my excellent reads of last year. Since this was my first Russian classic, it deserves to be highlighted.


A natural question that seems to follow on for readers of The Brothers Karamazov is 'Which brother is your favourite?' As I mentioned in my review, they each represent one main aspect of humankind; the physical, intellectual and spiritual. If there are equal takers for Dmitri, Ivan and Alyosha, may it be because readers prefer the one they feel they can relate to most? Do you think it's that simple?

Although, 'I love them all,' is a valid option, I think my choice must be Alyosha, or Alexey, the youngest Karamazov, even though he has less to do with the main murder story line than the others. It's clear that this young man is squeaky clean from the get-go (and that's no plot spoiler), which may make some readers consider him a bit boring. Could it be simply because I relate to him most that makes him my favourite? I was the youngest sibling too. I like to prioritise my spiritual nature, and want my family to be happy. And what's more, I'm nothing like party boy Mitya or genius Ivan.

I also love Alyosha simply because I think the book would be a flop without him. That's why he deserves being highlighted as a fairly obscure heartthrob from nineteenth century fiction. Here are my reasons.

1) It's refreshing to have a person we can trust as a main point of view character. In the centre of all the drama and chaos, his was a clear, calm head in which to find ourselves. Alyosha has no ulterior motives, unlike some of the other characters. He simply wants to be the best version of himself he can. You can't get a more reliable narrator than that. Dmitri and Ivan were both pretty high maintenance in their own ways, but Alyosha never asked anybody for anything, or expected favours or even understanding.

2) He's genuinely fond of each member of his family, and wants the very best for them. Once again, you certainly can't say the same for all the others.

3) He's perceptive and wise. He quietly sees what others miss, and so do we, through his eyes.

4) In several other classics, we tend to find main characters on downward spirals. The author leaves them to their animal lust, jealousy, murderous passion, or whatever other vice sweeps them away. For such a thick classic, it makes a refreshing change to spend a lot of time in the head space of someone who is kind and cares about others. He made me retain my interest in the story, because without him, I wouldn't have cared as much about the others. To be honest, Dmitri and Ivan seemed like gits at times, but not when seen through Alyosha's eyes.

5) Even people who can't stand him end up liking him. This young man brings out the good in everyone. He behaves as if he did a Dale Carnegie course years before it even existed. Thoughtfulness is just natural for him. The district boys, and Captain Snegiryov had good reasons to distrust anyone with the surname Karamazov, and Alexey was the only one who could have smoothed their feathers and stopped them getting their backs up, even though they didn't want to like him.

6) Father Zossima's last words to him, which he intended as a prophecy for the rest of Alyosha's life, becomes a challenge for us readers too. He said that Alexey will 'bless life and make others bless it too, for that is his character.' It's true that while reading from his point of view, you can't help regarding the world in a happy and favourable light, that you want to retain once you finish reading the book.

7) He pulls the threads of the story together. For chunks of the book, we travel around with Alyosha as he walks through town, visiting others who badly want to see him and vent their thoughts about what's going on in their lives. And there's a lot of different drama happening! The story's flow would get disjointed pretty quickly if we weren't able to simply stick with Alyosha for the day. He's the glue that holds the plot together, helping to smooth transitions. It's interesting that his function as a character in the plot matches his personality in life.

8) He challenges the more sceptical characters about their lack of faith in God. Or more to the point, he challenges us readers to question their scepticism. While characters such as Ivan, Rakitin and Smerdyakov are busy convincing themselves about the non-existence of God, Alyosha doesn't bother buying into all their arguments and discussions. He simply chooses by faith to be a man of God. And if the others stopped to think, it might occur to them that denying the existence of God doesn't make a lot of sense, as long as people like Alyosha are going around, proving that since they're displaying his spirit, then something of God exists in the world.

9) Some of the stories he's involved in stick in my head.  ie Grushenka and the onion. I'll leave that as a hook. You'll have to read it to find out what I'm talking about. But it's all about kindness and getting to heaven.

10) Dmitri is a hot-head, but sometimes drops a very apt quote. Perhaps this one sums up his youngest brother. 'Though I say that Ivan is superior to us, you are my angel. Perhaps it's you that is superior and not Ivan.'

That's why I'm putting this boy on my list of unforgettables. Of course, you may find the other brothers heartthrobs too, which opinion was certainly shared by several women in the book. I highly recommend getting stuck into this Russian classic, to fill your charismatic character tank for some time to come.