The day I was rebuked by Jane Austen 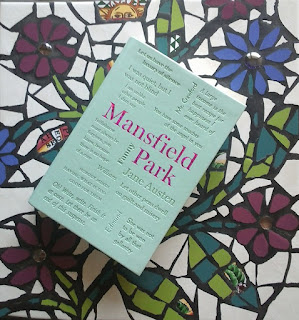 During my recent read of Mansfield Park (review is here), I noticed a curious omission. Although Edmund Bertram is the hero of the story, Jane Austen rarely (if ever) described his appearance. Since it's a fairly thick novel, I started wondering if this was deliberate on her part. Otherwise the occasional accidental reference to his thick hair, bright eyes or sweet smile might have slipped through. After all, she described his party-boy older brother Tom, not to mention the rakish playboy Henry Crawford. But although Edmund made the heroine Fanny Price's heart flutter, it was always for his acts of generosity or statements of moral worth. We get the picture, he's a good man with sound principles.

Yet I'm the sort of person who likes to picture scenes playing out before me, a bit like a movie screen, while I read. I had to give him some sort of presence, because he can't be invisible. Other readers have mentioned that they find Edmund a bit wishy-washy and colourless, and I wonder if it's partly because they've been given nothing to go on when it comes to the space he fills. Since we're left to make up our own minds about his looks, I decided to imagine him fairly cute. After all, two girls were deeply in love with him throughout the whole story.

Then about three quarters through the book, Jane Austen gives us something at last! It's a line from Mary Crawford, in a letter to Fanny. 'Lord Stornaway isn't so very ill-looking, but he will not pass by the side of your cousin Edmund.' Eureka, I was right and Edmund is nice looking. I even cheered softly to myself. Mary Crawford isn't depicted as the most principled character, but we can always rely on her to get to the point many women want to know. Thank you Mary!

But a few pages later, Fanny is ticking Mary off in her thoughts 'for thinking only of his appearance.' Since Fanny is so often the mouthpiece for her author, it's pretty obvious that a ticking off from Fanny is a ticking off from Jane. Ooops, I get it, sorry. Forget my vocal applause from ten minutes ago. It really felt as if our beloved Jane Austen had reached back through the centuries to give me a rap on the knuckles for being shallow. It was a strange sensation that made me laugh, but also feel a bit sheepish.

I remembered several years ago, when I was writing a novel of my own called The Risky Way Home. My editor sometimes scribbled in the margins, 'You're focusing too much on his looks and not enough on his character.' I wonder if Jane Austen was deliberately doing the opposite with Edmund, just to make her point about the most important feature of a person. We can only guess. But I won't forget the way she seemed to speak back through the centuries at that moment to say, 'Get your priorities straight, girl.'

But I'm going to speak up in self defense here, because I have one advantage over Jane Austen. She's been dead since the nineteenth century, so I can have the last word. There are excellent reasons why I think it is important to describe a hero's appearance. As I said above, I like to have some sort of inner reference for the moving picture that plays in my imagination while I'm reading. If the author doesn't give me one, I'll make up my own, because I can't help it.

But more importantly, having an idea of what a character looks like helps us not to be overly swayed by such things. If a writer gives her characters inner beauty which shines through, then we're naturally going to love them whether they're described as attractive or plain featured. And then, we're more likely to approach people out in the real world the same way, regardless of their shape or size. It wouldn't surprise me if readers of fiction, who have come across many different looking faces in the pages of books, are quickest to see through to a person's inner essence. We are most likely not to fall for someone's ravishing appearance until we get to know them, and also most likely to see actual beauty where others might not. So there Jane, maybe in some ways, considering a character's appearance is a sign of depth rather than shallowness.

My advice to authors would always be not to go overboard with physical descriptions as if it's the most important thing, but do give us something to go on, just to help give us a feel for the character. I'd love to know where you stand on the question. How important is it to you that authors describe what their characters look like? And if they don't, do you tend to fill in the blanks?