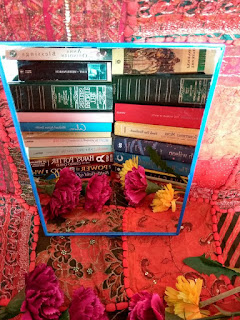 We all rely on our mirrors, and probably take them for granted. We've got to use them every time we get ready to go out, after all. But in stories, mirrors tend to be a bit spooky. I think they often show us things we'd rather not face about ourselves or the wider world. The idea of having a double, or doppelganger, in some inaccessible plane may also have something to do with it. Or maybe our personal feelings about our reflections help promote the love/hate relationships we sometimes develop with our mirrors. I find it interesting that so many of these fictional mirrors possess at least a tinge of the supernatural.

Her stepmother's magic mirror on the wall caused a whole lot of mischief. Its owner kept wanting the reassurance that she was 'fairest in the land' but mirrors are honest if nothing else. When it informed her that little Snow White had surpassed her in beauty, the jealous lady decided to do away with her stepdaughter. (Also see my list of famous mean girls.)

2) The Mirror of Erised
This penetrating mirror reflects the elusive sight a person most desires to see. Poor Harry Potter sees himself flanked by his loving parents, while his insecure friend Ron sees himself as the recipient of several awards. Professor Dumbledore explains that the mirror has to be isolated because it drives people mad. And when he tells Harry that he himself sees socks, he's not being entirely honest.

3) Coraline
This young Neil Gaiman heroine has been enjoying the mirror image of her real life in the old house. Everything is better, including the toys and food. But then the alternative mother offers to let her stay, with the condition that she allows buttons to be sewn over her eyes. Coraline finds her real parents trapped behind the mirror, writing, 'Help Us' on the glass. The whole game changes in a flash.

4) Through the Looking Glass
In this second part of Alice's adventures, she starts off wondering what life might be like on the other side of the mirror. To her surprise, she's able to step through and find out. You can be certain that what she finds is weird and surreal, including a wonderful garden and a tubby pair of twins.

5) The Phantom of the Opera
The dressing room of the young singer Christine Daae has been set up with a fake mirror. That appears to be a good thing until it's discovered that it allows the phantom to do his mischief. My review is here..

6) Anne of Green Gables
During the traumatic years before the Cuthberts adopted her, Anne Shirley pretended to befriend her own reflection in a mirror, even naming it 'Katie Maurice.' It helped her through some very rough times, but she eventually admits it fell far short of eventual real friends, like Diana, Jane and Ruby.

7) Narcissus
It's no stretch to say the the crystal clear waters of the lake serve the function of a mirror for this mythical hero. The gorgeous young man becomes fixated with his own reflection and wastes away for love of it. (See my list of the greatest narcissists.) 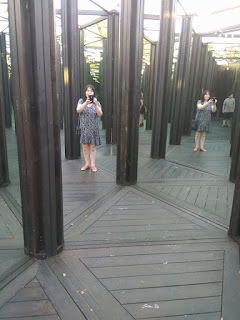 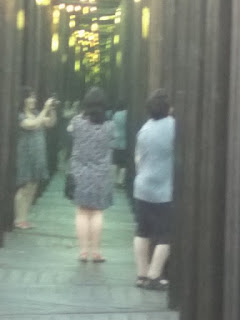 Early this year, I went through a sideshow called the House of Mirrors with my son. He actually started getting disoriented and was relieved to get out. He said he felt like smashing all the mirrors to escape.

The weird superstition that breaking a mirror results in 13 years of bad luck, proves that I'm not the only one who finds mirror stories a bit creepy. Story book mirrors are just asking to be broken, since they're made of glass. So I'll finish the list with some legendary mirror smashers.

8) Dracula
His shaving mirror gives young solicitor Jonathan Harker the frightening revelation that his host is actually a vampire. Count Dracula comes up behind him while he's shaving, and has no reflection! Yikes! That's one of their key traits, and the count smashes Harker's shaving mirror for giving his game away.

9) Dorian Gray
The main character is well aware of the phenomenon that's happening. While he keeps his good looks, his portrait grows older and more repulsive looking. To keep track of the changes, Dorian desperately uses a hand mirror to compare his appearance with his picture's. That mirror comes to a smashing end during the course of the story. My review is here.

The moment he's forced to give up his crown, the unfortunate king of England asks for a mirror. He expects to see that he's aged dramatically as a result of the sudden shock and grief. But he looks pretty much the same, and smashes the mirror, so that the shattered shards more accurately reflect his roiling emotions.

11) The Lady of Shalott
This ravishing beauty from Tennyson's poem is imprisoned in a tower by a mysterious curse, and can't look directly out at the world. She relies on her mirror to reflect the people of Camelot as they pass by, but regards them as mere shadows of the world. When handsome Sir Lancelot rides past, she can't resist the temptation to spin around and look at him directly. Big mistake. It causes the mirror to 'crack from side to side' and Elaine's death is imminent. That Lancelot broke more than just hearts.

12) Cosmo
He is the hero of a story within a story. The tale of Cosmo takes place in Phantastes by Rev George MacDonald. Poor Cosmo falls in love with a beautiful lady who lives on the other side of his bedroom mirror. He begins buying furniture and decorations especially to please her, but one day the mirror is stolen. It leads to an exhausting search in which he carries a hammer, determined to smash the mirror and free her, if he's ever in the position. See my review of Phantastes. 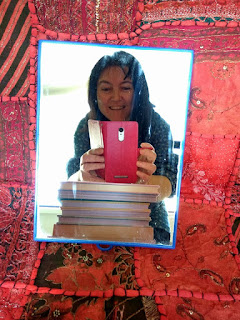 That's just me trying to set up another mirror idea for this blog post. Do any of these mirror stories to want to step in for more? Have I missed any you'd like to add? And finally, what is your own attitude to mirrors? Are they friends, foes, or both?
Posted by Paula Vince at 5:00 AM