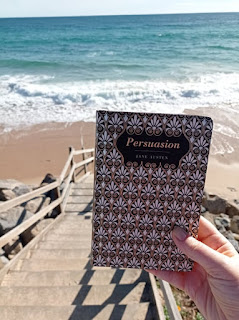 Twenty-seven-year old Anne Elliot is Austen's most adult heroine. Eight years before the story proper begins, she is happily betrothed to a naval officer, Frederick Wentworth, but she precipitously breaks off the engagement when persuaded by her friend Lady Russell that such a match is unworthy. The breakup produces in Anne a deep and long-lasting regret. When later Wentworth returns from sea a rich and successful captain, he finds Anne's family on the brink of financial ruin and his own sister a tenant in Kellynch Hall, the Elliot estate. All the tension of the novel revolves around one question: Will Anne and Wentworth be reunited in their love?

This could well be Jane Austen's most romantic novel of all. It's all about missed opportunities and the slim possibility of a second chance when it seems all bridges are burned. Anne Elliot is a quiet young woman who was persuaded by her trusted mentor, Lady Russell, to break off her engagement to a young man named Frederick Wentworth. But that was before he became Captain Wentworth, a great naval success. It's now eight years later, and Anne hasn't lived a day without major regret, for she realises he was the love of her life.

Now he's back in town, because his sister and her hubby have just become tenants in Anne's ancestral home. Captain Wentworth is still the same hot heartthrob she remembers, but it's clear he hasn't forgotten how she reneged on their engagement. He's now a resentful hot heartthrob who knows how to snub a girl, which Anne finds most formidable.

For his part, Wentworth almost gets more than he bargains for in his search for a girl who isn't such a pushover. Louisa Musgrove fits that bill and seems to be into him. A headstrong, stubborn and pushy young lady seems like a welcome change, but he discovers that girls who stick to their guns may create problems for themselves of a different nature. (I remember visiting the stairs down to the beach at Lyme Regis during my long-ago British holiday, and stopping to reflect that's where Louisa took her plummet.) The whole Lyme Regis incident was pretty cool, but I was sorry not to see the return of Louisa to the pages again after that.

There's a lot to love in this story. I enjoyed how Anne mentions the limitations of the patriarchal society she belongs to. It's in the scene when she debates with Captain Harville about whether guys or girls have the most constant and loyal hearts. Here's my paraphrase. Harville attempts to win the argument by saying in effect, 'Whatever you say, great works of literature are on my side, because they prove that men harbour stronger feelings and nurse broken hearts, while women are as fickle as the breeze. So there.' And Anne replies, 'Well, duh, we can take great works of literature with a grain of salt since they're all written by guys.'

Three cheers for Jane Austen, for doing her part to correct the balance.

She horrifies me at times though. Here's what the narrator has to say about Dick Musgrove, a young man who died aboard one of Wentworth's ships. 'The Musgroves had had the ill fortune of a very troublesome, hopeless son; and the good fortune to lose him before he reached his twentieth year; that he'd been sent to sea because he was so stupid and unmanageable on shore.' Ouch, Jane, that's a bit rough! If the twenty-first century has become a time of sugar coating and treading carefully to avoid causing any offence, I prefer it to the Regency era alternative.

But there's a whole range of shocking, straight speaking characters, including Anne's peacock-vain dad, Sir Walter Elliot, who always vocalises impressions others may just think. People's physical attractiveness is one of his favourite topics. Sir Walter goes way above and beyond what the average person would even notice, when you take on board some of his very personal observations, and his opinion that very few people are actually what he'd consider tolerably attractive. He objects to naval men in general for a start, because the sun and wind have wreaked such havoc on their complexions and skin elasticity.

Overall, it's satisfying to read how Anne and Wentworth are reconciled, including the great, hastily scribbled letter he's become famous for. Anne, and Jane Austen herself, must have considered him the complete package. At one stage we're told, 'Captain Harville, though not equalling Captain Wentworth in manners, was a perfect gentleman, unaffected, warm and obliging.' Huh, does that mean we're supposed to believe that Wentworth surpassed perfection?

I would've liked a little more of Louisa and Captain Benwick for full marks, and maybe even Henrietta and Charles Hayter. But still, a good read guaranteed.