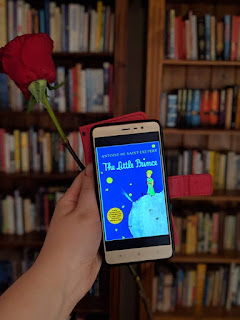 Moral allegory and spiritual autobiography, The Little Prince is the most translated book in the French language. With a timeless charm it tells the story of a little boy who leaves the safety of his own tiny planet to travel the universe, learning the vagaries of adult behaviour through a series of extraordinary encounters. His personal odyssey culminates in a voyage to Earth and further adventures.

MY THOUGHTS:
This is my choice for the Classic in Translation category of the 2019 Back to the Classics Challenge. It's one of those stories where I feel we can't help revealing aspects of the plot when we discuss the themes, but I'll try to keep spoilers to a minimum. It's a great fable first published in 1943. The author, Antoine de Saint-Exupery was a pilot of small aircrafts who once found himself stranded in the Sahara just like the narrator of his story, but that's where the similarity ends. (Unless this really is his biography about a true encounter. Do we dare to believe it?) TIME magazine called Saint-Exupery 'the most metaphysical of aviators,' but tragically, he disappeared the very following year, on a wartime reconnaissance flight over Europe. His plane was discovered in the sea 60 years later, the only trace of the talented writer and illustrator, not counting this brilliant novella.

Here's how it all goes down. The narrator is a pilot whose small plane has engine trouble over the Sahara Desert, forcing him to land. While he's trying to fix his mechanical problems before dying of thirst, a small blonde boy approaches to engage him in conversation. He turns out to be an alien from outer space who has visited several other planets before arriving on earth. He's full of stories and puzzled questions about all that he's seen.

The Little Prince (who I'll call LP from now on) comes from a tiny asteroid known to earthlings as B-612, no bigger than the size of a house. It has three knee-high volcanoes and plenty of small baobab seedlings which he has to uproot before they grow big enough to cause major structural damage. There's also one strange and beautiful flower with four thorns and a wonderful fragrance, who believes she's unique in the universe. LP loves her, and works hard to help her flourish, but she's a vain and prickly attention seeker who annoys him sometimes, so he hitches a ride with a flock of birds to find out what else is out there.

It's one of those simple children's fairy tales on the surface with underlying parallels, making it the sort of allegory adults recognise themselves in and appreciate. The LP meets all sorts of archetypal and bewildering people who think they're carrying out roles of great consequence, although they strike him as ridiculous. They're too blinkered to look beyond their noses and appreciate the beauty that surrounds them, and dismiss his observations as frivolous chatter.

Among others, there's a pompous king with no real power, a tippler who drinks to forget he's ashamed of drinking, a businessman intent on tallying stars in his ledger, and a geographer who never visits the places he records, because that's the work of an explorer. There's also a conceited man who wants to be hailed as the best person ever. LP gives him the positive feedback he craves, then wonders why the guy thinks he's any better off than before. LP can't understand the point of praise as an end in itself.

But LP learns enough during his travels to develop his own crushing case of disillusionment. Especially when he comes across a garden full of thousands of roses, and knows his special friend would be devastated, because they both believed she was unique. He's crestfallen because he set off believing he was rich and blessed, and is brought to see that compared to those on earth, his modest volcanoes and common rose may make others say, 'Meh, so what?' What do you do when you find out that you're just an Average Joe?

It takes my favourite character, the beautiful fox, to help him straighten his thinking. The fox asks LP to please tame him, because then they'll be meaningful to each other. Taking time to establish ties with others, working on relationships, listening, nurturing and understanding, is well worth the effort. It's what makes run-of-the-mill chance encounters into something far more valuable. This reasoning strikes a chord with LP. I believe a major insight for him is not to take our cues from self-appointed voices of consequence, because what is meaningful to us is so often brushed past by them.

'He was only a fox, like a hundred thousand other foxes, but I have made him my friend, and now he is unique in all the world.'

His new friendship puts him in the position to better grasp the significance of his old one.

'She alone is more important than all the hundreds of you other roses. It is she I have watered, she I've put under a glass globe, sheltered behind the screen, killed the caterpillars for and listened to when she grumbled or boasted. She is MY rose.'

'The Little Prince' may bring different impressions to different people, because there's a lot crammed within its deceptively simple pages. For me it's a wake-up call to value those personal relationships in my life as the treasures they are. My husband, kids, extended family and friends are priceless just because they belong to me. As the LP and the narrator both agree, it should take only a little bit to satisfy us when we truly know what we are looking for. 'The men of the world can't find what they're looking for in a surplus of roses or huge bodies of water. And what they are searching for can be found in one single rose, or in a little water.'

I'm not always a big fan of parables and allegories, because their agenda sometimes seems shoved right in our faces, with highly predictable plots and cardboard characters. This is one of the best I've come across, because its weird, left-fieldedness really does make us use our own grey matter to ponder what Saint-Exupery might have been getting at. And without being over-sentimental itself, it has a way of drawing the best sort of sentimentality out of us.  So I'll finish off with a quote from the fox, who really is quite a guy.

'If you tame me, it will be as if the sun came to shine on my life. I shall know the sound of a step that will be different from all the others. Other steps send me hurrying back underneath the ground. Yours will call me, like music, out of my burrow.'