'The Napoleon of Notting Hill' by G.K. Chesterton 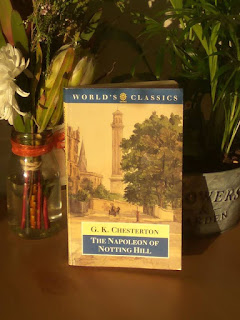 In a London of the future, the drudgery of capitalism and bureaucracy have worn the human spirit down to the point where it can barely stand. When a pint-sized clerk named Auberon Quinn is randomly selected as head of state, he decides to turn London into a medieval carnival for his own amusement. One man, Adam Wayne, takes the new order of things seriously, organizing a Notting Hill army to fight invaders from other neighborhoods. At first his project baffles everyone, but eventually his dedication proves infectious, with delightful results. First published in 1904, The Napoleon of Notting Hill was Chesterton's first novel. It has been called the best first novel by any author in the twentieth century.

MY THOUGHTS:
This book caught my eye at the second-hand shop, and I thought it'd be a good choice for the 'Classic by a New-To-You author in the 2018 Back to the Classics Challenge. I'd heard of G.K. Chesterton, but knew next to nothing about him. If this first novel and his Wiki page is any indication, he was a pretty colourful character and man about town. The title alone should have given me some indication that this story would be a weird ride, but it still had me shaking my head several times. Not in a bad way though :)

Chesterton wrote it in the guise of a futuristic tale, but it's really more like an alternative history of his own turn-of-the-twentieth-century London. The hereditary monarchy of Britain has been abolished. Instead, successive kings are chosen haphazardly by lot. The characters are great at justifying the reasons behind this. (Is trusting the luck of the draw any less chancy than hoping the eldest son of an eldest son will turn out well? If he's a tyrant, he's still a check on hundreds of other tyrants. If he's a cynic, it's to his interest to govern well. And if he's a criminal, we've removed the need for crime by removing poverty and substituting power.)

One day the role falls to Auberon Quin, a little owl-like guy who likes nothing better than a good joke. He says, 'A sense of humour, weird and delicate, is the new religion of mankind. I made a kind of vow to myself that I would not talk seriously, which always means answering silly questions.' When he's crowned king, Auberon decides to turn the London suburbs into a copy of the old Medieval feudal system he loved reading about as a kid. Everyone is ordered to erect city gates and obtain banners and coats of arms, just so he can amuse himself by sitting back and seeing it all play out.

Of course the people hate it. (Londoners had no particular objection to the king making a fool of himself, but they were indignant when it became evident he wished to make fools of them.) But since lodging formal complaints involves putting themselves in the spotlight with trumpets and fanfare, they decide to let it roll and live their lives as normal as possible. Some businessmen wish to build a new highway which will involve demolishing a tiny, insignificant street in Notting Hill. The young ruler of that suburb refuses any money offers, and decides to declare war on them, with all the pomp and ceremony he can muster.

It turns out that even though the king considers his own reign a big joke, Adam Wayne takes it totally seriously. He idolises his birthplace, Notting Hill, with great fervour, and closest to his heart is the aptly named Pump Street, which is under threat. The style of the current monarchy makes it easy for him to defend it with all his passion. What follows is a total shemozzle, fought with all sorts of antique weapons such as halberts and swords.

Whoa, the first thing that jumps out at me is that guys with warped senses of humour and guys with no sense of humour are equally dangerous. Chesterton seems to be suggesting that a balance somewhere in the middle is needed. I'll bet he had great fun writing it, and the foreword in my copy says that one rejected title was, 'The Joker and the Fanatic.'

It's a fairly short and quick read, with the potential to spend just as long thinking about it and trying to thresh out meaning when you finish. Both main characters have some valid points. Auberon believes that humour is the greatest power in the world, and we'd definitely suffer to live without it (although Adam Wayne somehow managed!) But we can also take good on board from the way Adam appreciates simple truth and beauty that others take for granted. We may think he romanticises the commonplace to a ludicrous extent, but it makes him happy and there are big grains of truth in it.

One thing stays most in my mind. What Auberon intended as a meaningless joke without any real conviction becomes a great and wonderful cause for Adam to believe in. He doesn't let any man dictate what's meaningful and what's not, so perhaps Chesterton is challenging us to follow his example. We can use our own God-given heart and reason to choose what we deem meaningful, and we can do it in a more balanced way than these crazy, polarised protagonists.

Here is some of the sort of dialogue you can expect. This bit begins when the king feels the earnest young man growing on him.
Auberon (to Adam): Have you hypnotised me? Curse your uncanny blue eyes. Let me go. Give me back my sense of humour. Give it back I say.
Adam: I solemnly assure you that I haven't got it.
Auberon: No, I don't think you have. (Falls back with a roar of laughter.)

Some passages are surprisingly topical for our day and age. How about this one. 'Mr Mick not only became a vegetarian but at length declared vegetarianism doomed, shedding, as he called it finely, the green blood of the silent animals. He predicted that men in a better age would live on nothing but salt. And then came the pamphlet from Oregon (where the thing was tried) entitled "Why should Salt suffer?" and there was more trouble.' It impresses me to think that this was published back in 1904!

I'm glad I read this wacky little book, but won't add it to my favourites. It's too ridiculous for many stars, but too thought-provoking for few. It probably deserves a ranking somewhere in the middle, which may match where our senses of humour should be.