'The Spirituality of Jane Austen' by Paula Hollingsworth 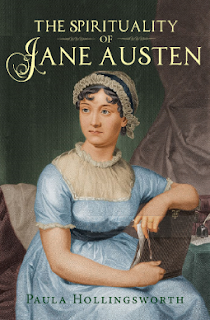 Best known for her novels Pride and Prejudice, Sense and Sensibility, Mansfield Park, and Emma, published anonymously, Jane Austen commented, critiqued, and illuminated the life of the British gentry at the end of the 18th century. But did Jane’s writings highlight anything about her own spirituality?  In this celebratory book, Paula Hollingsworth explores Jane Austen's gentle but strong faith and the effect it had both on her life and her writing.

MY THOUGHTS:
This book delves into the personal faith of one of the world's most beloved British novelists, drawing from her own correspondence and personal writing. It also examines the deeper mindsets and attitudes of characters in her novels for clues of what their creator really felt.

Jane's own faith is an interesting question, considering her cheeky portrayal of clergymen in her novels, such as the pompous, servile Mr Collins, and the snobby, social climbing Mr Elton. We can't help wondering whether they were proof that she deplored the Christian faith, or if she simply considered that they represented a different brand of Christianity to hers.

Jane Austen's fondness for reading printed sermons, and some of her own written prayers indicate that she was a devout believer in her own quiet way. So do the guiding principles of her main characters. For example, I love the idea that the retiring Fanny Price actually serves the role of Old Testament prophet or seer in the novel 'Mansfield Park.'

It's revealed in these pages that Jane didn't appreciate the evangelical movement or the behaviour of its spearheads, such as John and Charles Wesley. It seems she objected to their emphasis on dramatic conversion experiences, and the sense of superiority it seemed to suggest. For Jane Austen, matters of faith should be strictly between the individual and God. She didn't think highly of the evangelical novelists of her day. In her opinion the Christianity they presented in their stories was too showy and in-your-face, although she used less modern expressions. It's all very interesting, and makes me pretty sure that if she'd been born in our time, she'd probably choose to write for the secular market, just as she did in her own.

I like the glimpse of the popular novels of her Regency time period. They tended to be either Gothic or Romantic Sentimental, neither of which was approved reading for young ladies. They were regarded as frivolous and even dangerous, but the Reverend George Austen gave his daughters uncensored access to his personal library of over 500 volumes, which did include recent hyped-up best sellers.

These days, Austen fans tend to think of him as a good dad, but back then, the majority might have thought differently. I couldn't help comparing his situation to a current question I've seen often going around, of whether conscientious parents should put filters on their kids' internet, or even forbid it altogether. I've come across parents who do either one or the other, although we never did either in our household. It makes me think we were following in the footsteps of the Austens. I love how they were self-proclaimed, unashamed novel readers, in their day and age. Jane has her 'Northanger Abbey' hero Henry Tilney declare, 'The person, be it gentleman or lady, who has not pleasure in a good novel must be intolerably stupid.'

Altogether, if you don't mind a fair bit of her plots being re-told, this is a good read with some interesting detail for any fan. Not only does it give another good glimpse into Jane Austen's family life, but gets us reconsidering our own attitudes alongside those of Jane and her family.

Thanks to NetGalley and Lion Hudson for my review copy.