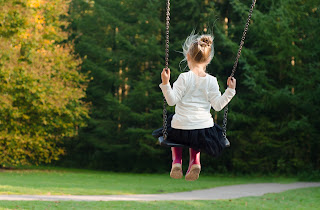 For those of us who have reached adulthood, I'm sure we can remember moments when our childhood seemed to drag on forever. But then we get to a stage when we realise it flew by like the wind, and wish it hadn't been so fleeting. Those of us with kids of our own definitely have nostalgic moments of wishing they'd stayed little and cute for longer. In J.K. Rowling's novel 'The Casual Vacancy', the character Tessa reflects, 'How awful it was, the way tiny ghosts of your living children haunted your heart. They could never know, and would hate it if they did, how their growing was a constant bereavement.' Maybe you have to be a parent to get where she's coming from.

There seems to come a point when we realise that we'd taken all the good parts of childhood for granted. We blinked and missed the wonder and joy, while the restless discontent and urge to grow up filled our thoughts. I'm sure we share moments of longing to turn back the clock and have another crack at it, this time with the benefit of hindsight. I think these are all powerful reasons why several stories tend to introduce people I've called 'Evergreen Kids.' These are characters who never grow up. Readers can return to them time and again, knowing they'll be there for us. Just because time doesn't stand still for us, at least we can rely on some of our favourite characters remaining static.

I think there are two distinct categories of Evergreen Kids in our stories. I'll discuss them each in turn.

The evergreen kids who theoretically age at the same rate as the rest of us, but really don't.

These kids remain the same age for year after year, because we love them that way. Ash Ketchum has been a 10-year-old Pokemon trainer since the early 1990s. Bart Simpson is also perpetually 10 years old, making his same wise cracks and being a nuisance to the adults. And his sister Lisa will always be a child genius, because she'll never grow any older than 8.

My kids and I used to love watching the cartoon series 'Arthur' because the main family in it was a dead ringer for ours. But at this point in time Logan and Emma are 22 and 18, while Arthur and his little sister D.W. have remained 8 and 4.

The evergreen kid phenomenon is evident in mystery series too. In my early teens, I used to devour Trixie Belden novels. One day it dawned on me that for the girl detective to have solved that many mysteries at the age of 14, the year would have to contain far more than 52 weeks. Sometimes, I wish my time could expand like a sponge in a similar way.

Other kids in this category include such characters as Dennis the Menace, Ginger Meggs, Pippi Longstocking and Milly Molly Mandy. They need to stay the same age to please us readers and viewers, because if it's impossible for us to be immortal, at least someone can do it. There's no identity crises for these kids. They could truly make A.A. Milne's little poem their life motto.

But now I'll get on to the second category of ageless kids, who bring out the more sinister side.

The true evergreen kids who remain stuck at the same age, for whatever reason.

These lovable peculiar children have been living in a loop of the same day since the second world war. Although their ages evidently range between about 8 and 17, if you ask them, they may reply something like, 'I'm 86 and he's 92 and she's over 100.' They've lived the correct number of days to make them elderly, but since the current one is always September 3rd, 1940, they never age. If Miss Peregrine hadn't created the time loop, they would have been destroyed by a bomb that very night.
This makes them weird and wise in many ways. When their friend Jacob joins them from the 21st century, he's regarded as a bit of an oddity, because he's really 16.

2) Moaning Myrtle
This poor girl never grows older because she's a ghost. Myrtle was killed by accidentally coming face to face with a basilisk in 1943, and she's haunted that toilet block in Hogwarts ever since. She's perpetually crying, feeling sorry for herself, getting prickly when she hears her nickname, and checking out cute boys. Even as late as the events in The Cursed Child, she's willing to flirt with Albus Potter and Scorpius Malfoy because she was partial to their fathers. Then when the two dads rush in, she attempts to pick up where she left off with her former crushes too. No doubt she'll be doing the same for generations to come.

3) Jesse Tuck
This young man's situation really creeps me out. He and his family unintentionally attained immortality by drinking from a supernatural water stream. Now they never age, and cannot die. They make this discovery accidentally, when they survive several disasters which would have proven fatal under normal circumstances. But it proves to be a high price to pay, when Jesse's young girlfriend, Winnie, sensibly decides to refrain from drinking the water, opting to grow old and die instead. The final glimpse of Jesse in the story Tuck Everlasting is of a lonely teenager who forever outlives everyone he grows fond of, and is denied the final rest of death.

4) Chip
He's the cute little enchanted cup from Beauty and Beast, who goes along with his mother, Mrs Potts, the teapot. They, and several other castle staff, have been put under a spell by the same enchantress who turned the arrogant young prince into a monstrous beast. When the spell gets broken, he becomes a little boy again, and presumably grows up the same as any other child.

The ultimate evergreen kid, he's the boy who never grows up. Along with his band of followers, or 'lost boys', they live in Neverland where children stay forever young. Wendy Darling and her brothers, John and Michael, can't resist his allure, especially when they learn to fly. Peter remains adamant that his carefree attitude trumps the care and responsibility that goes with adulthood. His biggest dread is that they'll 'catch him and make him become a man.' Haven't we all come across guys with Peter Pan syndrome? (Some might even call it a feature of the whole Millenial generation, lol.) Yet even though the Darling kids love his lifestyle at first, they come to miss their old lives with their family and understand that the adult lives which await them in the future may have benefits of their own. (Wendy wants to be a real mother, and John would like to work in his father's business.)

So although the characters in Group 1 may make us envy their perpetual youth, those in Group 2 show the down side. We can't avoid aging. That's the bottom line, and it has to be a good thing. Maybe the best thing we can do is maintain a youthful heart in our older bodies. I like to think I've achieved that to some extent, because I feel essentially the same in my 40s as I was in my 20s, and even my teens (add some kilograms). It never stops surprising me, especially when I remember how staid and plodding my friends' middle aged parents used to seem, not to mention my own. I've reached the age where I'm willing to concede that perhaps that was just on the outside.

Have you experienced something similar, no matter what age you are now? Do you have a favourite evergreen kid of your own, either from my list or someone I've forgotten?

If you enjoyed thinking about these characters, have a look at my related list about characters who suffer from weird genetic diseases involving the passage of time.
Posted by Paula Vince at 5:00 AM