'The Pickwick Papers' by Charles Dickens 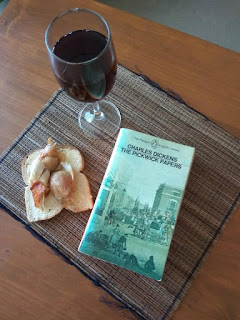 Few first novels have created as much popular excitement as The Pickwick Papers–-a comic masterpiece that catapulted its 24-year-old author to immediate fame. Readers were captivated by the adventures of the poet Snodgrass, the lover Tupman, the sportsman Winkle &, above all, by that quintessentially English Quixote, Mr Pickwick, & his cockney Sancho Panza, Sam Weller. From the hallowed turf of Dingley Dell Cricket Club to the unholy fracas of the Eatanswill election, via the Fleet debtor’s prison, characters & incidents sprang to life from Dickens’s pen, to form an enduringly popular work of ebullient humour & literary invention.

This is my choice in the 2017 Back to the Classics challenge for a nineteenth century classic.

Since this book was just shy of 900 pages, there's so much to say, which I'll try to condense. Here's a quick summary. Mr Pickwick is the kindly, middle-aged leader of a gentlemen's club that bears his name. He and three followers decide to journey to remote towns from London to record their observations. There's Mr Tracy Tupman, a chubby, middle-aged man who loves pretty ladies; Augustus Snodgrass, who fancies himself a poet, although we never see any of his poetry; and Nathaniel Winkle, a young man who wants to give the impression that he's a terrific sportsman, although his bluffing often endangers lives. They're joined by Samuel Weller, a sharp-witted and cheery young Cockney who becomes Mr Pickwick's man servant.

I chose this book for my nineteenth century classic because the March sisters in 'Little Women' valued it highly, as did Anne of Green Gables and her friends. It turns out to be the very best of Victorian fun. There's lots of energy, partying and travel, and not so much of the simmering anger about social injustices that fuel Dickens' later works (although there is still some). I was well into it before I googled the background, and discovered that it was his very first work, at the tender age of 24. So the author wasn't yet the scholarly, bearded Charles Dickens we often see in photos, but more of a young lad named Charlie. I'd been getting the feeling that it was written by a younger person, so that made a whole lot of sense. 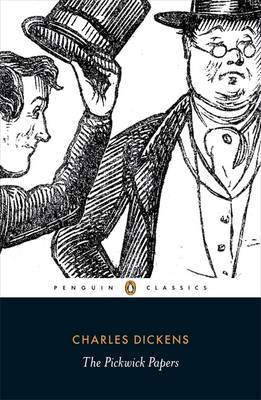 The story was serialised in a newspaper throughout 1836 and 1837. It would have been their version of our long running TV series, and explains the episodic sort of structure, especially toward the start. But there are a couple of major themes running through the book.

1) Pickwick and Co attempt to expose a con man named Alfred Jingle and his equally shifty servant, Job Trotter. Jingle preys on single ladies who have a bit of money, anxious to get his hands on it. He enchants them into thinking he's some sort of VIP, instead of an itinerant actor.
2) Pickwick's landlady, Mrs Bardell, jumps to the conclusion that he's proposing to her, while he's really talking about hiring a servant. She sues him for breach of promise and drags him through court. He's determined to face debtor's prison on principle, rather than pay the costs for damages which he so rightfully shouldn't.
3)Pickwick's followers, especially the younger ones, wish to make marriages of love rather than necessity, and are sometimes forced to go about it in desperate ways.

In L.M. Montgomery's 'Anne of the Island' there's a scene where Anne tells her friend Philippa Gordon that she's reading Pickwick, to which Phil replies that Pickwick always makes her hungry, because they often seem to be nibbling nice things. I think there is a still life painting sort of quality about the food the characters eat. Normal fare includes broiled fowl, pigeon pie, veal, ham, lobsters, anchovy sandwiches, saveloys and devilled kidneys. At one point, a couple of characters observed that 'poverty goes along with oysters and pickled salmon'. What would they think if they knew that in the future, that food would be indulged in mostly by the wealthy?

What stood out most to me though, was the dominance of meat in their diet. Even breakfast was likely to be something like 'a cold round of beef.' Sam Weller tells a terrible tale about a cat owner who substituted kitten meat for veal in his famous pies. But honestly, those Victorians seemed to love a variety of meat so much, half of them probably wouldn't even mind if they thought it tasted good! And sure enough, non-meat eaters turned out to be a source of mirth. At one point, the text refers to 'an elderly, pimply-faced, vegetable diet sort of man.'

But what I noticed even more than the food was all the drinking! I'm amazed that the March (and Alcott) families, who never let a drop pass their lips, loved this book so much. Fairly early on, I thought, 'I'll bet the scenes where someone has a drink are more than the scenes without.' A little further, I changed my mind again, to, 'Is there ever a scene where nobody has a drink?' Even though the book was 900 pages long, I doubt it. Getting tipsy or downright drunk seemed to be all in a day's work. The characters in favour of moderation or abstinence were gently poked fun at, or exposed as hypocrites like Mr Stibbins, the 'false shepherd' who loved his pineapple rum.

Mr Perker, the lawyer, asks his clerk, Mr Lowten, 'Will you take a glass of wine?'
'No thank you, sir.'
'You mean yes, I think,' said the little man, turning for a decanter and glasses.
Since it's The Pickwick Papers, of course Lowten did mean yes.

Even though it's a fun story, the harsh realities of the Victorian era can't be denied. Back then, if you didn't find some way of looking out for yourself and planning for your future, you starved. People made such a big deal out of money because it was a big deal. There was no such thing as welfare payments or government support. Poorhouses and debtor's prisons were places of nightmares. It's easy enough for us to sit back and judge Jingle and Job as villains, but when you look at where they find themselves throughout the course of the story, you can see why they'd do the deeds they did. I'm sure it was the same need that drove lots of boys to become bushrangers in colonial Australia. It's easy to choose to be honest when you don't face a slow, agonising death. 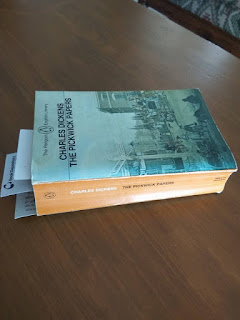 It strengthens my opinion that you can't ever really get a feel for times portrayed in novels without reading one by an author who actually lived in them. There's all sorts of slang, trivia, and lost details which are explained in the notes at the back of the book. For example, at one stage it says, 'the windows were looked out of often enough to justify the imposition of an additional duty.' I flip to the back where I find out that there was actually a window tax in Victorian England. Well, whoever would've thought? My advice is to read a paperback copy with three bookmarks, as I did. One for the character list at the front, one to mark where you're up to in the story, and one for those interesting, educational footnotes at the back. It comes across as a daunting prospect at the start, but so worth it, just for the experience of Mr Pickwick, who's such a genuine jolly fellow, and Sam, who's brilliant enough to deserve a blog post of his own. (That post is here. I invested too many hours in this book to brush off with just a one-post review.)