'Until the Dawn' by Elizabeth Camden 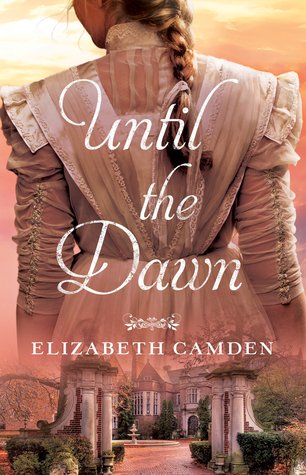 A volunteer for the newly established Weather Bureau, Sophie van Riijn needs access to the highest spot in her village to report the most accurate readings. Fascinated by Dierenpark, an abandoned mansion high atop a windswept cliff in the Hudson River Valley, Sophie knows no better option despite a lack of permission from the absent owners.

The first Vandermark to return to the area in sixty years, Quentin intends to put an end to the shadowy rumors about the property that has brought nothing but trouble upon his family. Ready to tear down the mansion, he is furious to discover a local woman has been trespassing on his land.

Instantly at odds, Quentin and Sophie find common ground when she is the only one who can reach his troubled son. There's a light within Sophie that Quentin has never known, and a small spark of the hope that left him years ago begins to grow. But when the secrets of Dierenpark and the Vandermark family history are no longer content to stay in the past, will tragedy triumph or can their tenuous hope prevail?

This is the type of plot where the main characters start off at odds, but we can understand both sides. Sophie has been involved in the caretaking of the property, Dierenpark, since she was a child, and is just doing what she's always done. Quentin is aghast at what appears to be the exploitation of his family's misfortune by those who work on the property. We know there are bound to be fireworks, but I loved the deeper aspects which kept being introduced.

There's the historical aspect. The story is set when weather predictions were in their infancy, and Sophie is one of many volunteers across the country who collect data, helping the Weather Bureau to fine-tune their accuracy. It's interesting to see the dedication behind something we now take for granted.

Then there's the psychological aspect, getting us pondering about the nature behind a good mood. Both protagonists have had rough experiences, but Sophie chooses to focus on the benevolence in the world, while Quentin intially hones in on his hard knocks. We've each got to make up our minds whether we choose to regard the world as a friendly or hostile place. That's at the bottom of many lively exchanges between Sophie and Quentin.

That leads to the supernatural aspect. The property, Dierenpark, is regarded as a beautiful, fertile haven because of some sort of blessing taking place in a hidden realm, challenging even Quentin to wonder whether or not something is happening just beyond the reach of his senses. Even the oysters show signs of prosperity here, although I don't fancy swallowing them straight from the shell, as so many of these characters love to do.

The attitudes of all the different characters help make this book. Quentin is all about realism and science, evident in the lesson he keeps trying to pound into his son. Kid characters don't always come across believably or sympathetically in novels, but Pieter is great. Grandpa, Nickolaas, is into all sorts of weird, spiritual theories, with the money to chase them up. Then there's Sophie, with her attitude which strikes Quentin as so naively cheerful. He could have called her a Pollyanna, if those Pollyanna books had been written back then.

My only gripe was a few loose ends which I wish had been tied up, including a fairly intense argument between Sophie and Quentin, which we're left to assume was simply brushed under the carpet or forgotten about. I wished it hadn't happened, at that stage in their understanding. Even the matter of the bee hives wasn't really returned to. I won't say more, for fear of plot spoilers.

Anyway, I had to laugh when Sophie grouchily reflected that all Quentin had going for him was intelligence and a sense of humour, to which she couldn't help adding the obvious good looks and wealth. In the eyes of many ladies, surely that would be enough! It shows just how much a sour, cranky attitude can overshadow, and how easy it was to become a Quentin fan when he started dealing with it.