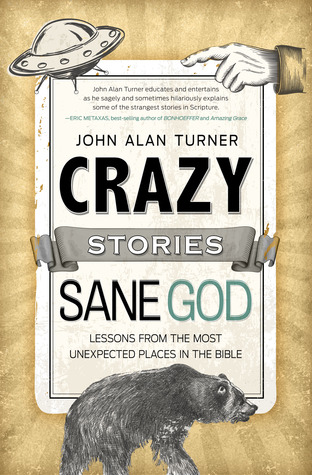 2015 Reading Challenge, Week 43 - A Book with Antonyms in the title.
I searched through my kindle and discovered this one, which fits the bill.

You probably know a lot of Bible stories: Joseph and his coat, David and Goliath, Daniel and the lions, Jesus walking on water. These get mentioned everywhere from popular literature to your local church.

But there are other stories in the Bible that preachers and Sunday school teachers tend to skip over because . . . well . . . because they seem crazy and mad; the kind of stories that make us change the subject quickly when children bring them up, because we don't know why they are in the Bible or what they could possibly mean.

In Crazy Stories, Sane God popular author and teacher John Alan Turner takes us on a wild and unpredictable ride through the weirdest and least familiar stories in the Bible. Through it all, Turner shows us how even these odd episodes reveal important things about the character and nature of God and, consequently, what they mean for us today.

MY THOUGHTS:
This book is full of entertaining and well-written summaries of Bible stories from someone who seems to be a natural comedian. For example, the author suggests that Abraham must have felt ripped off (he says no pun was intended) when God gave him the covenant of circumcision, because he knew Noah got a rainbow. What it doesn't contain is much help making sense of some of the curly incidents many of us have no doubt wondered about.

Here's a handful of the questions the book claims to address? Why would Noah curse his grandson, Canaan, who apparently had nothing to do with Ham's gesture of disrespect? Why would Elisha call down a curse causing teenage boys to mauled by bears, simply for making fun of his bald head? Why would Lot protect the strangers beneath his roof by offering to sacrifice his own daughters to the evil, lecherous crowd of Sodom? (That one always made my skin crawl.) Why would Jesus allow the demons he'd exorcised to enter a herd of pigs, and ruin a man's livelihood, rather than simply sending them off into the ether? Why would God choose to kill Ananias and Sapphira outright, rather than giving them a stern warning? And what about that weird passage near the start of Exodus about the 'bridegroom of blood' when Zipporah apparently saves Moses' life from God's wrath by circumcising their sons by hand?

Turner's responses seem to fall among the following.
a) God's ways are beyond our comprehension, so just trust Him.
b) Maybe we're asking the wrong question.
c) Maybe we're not supposed to know.
d) If the people involved had behaved better, it wouldn't have happened to them.

These four responses may indeed be our only human recourse, but then why set yourself up for criticism by writing a book with a title and blurb that suggests you're going to attempt to provide more complex and threshed out answers? Overall, it provided some laughs but seemed fairly superficial and didn't really satisfy the interest it stirred in me.