'Kale and Coffee' by Kevin Gianni 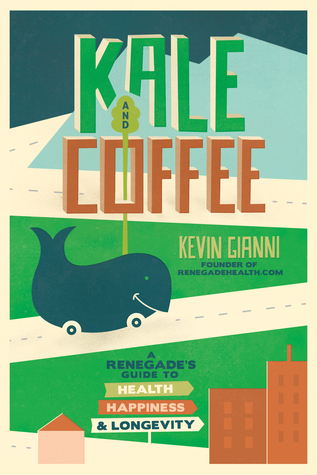 “Four years ago, when I was something of a YouTube health celebrity, I was on top of the world [and] . . . the diet pyramid. I ate the cleanest, most nutritious diet on the planet (or so I thought). A raw-food vegan diet . . .  not only pure in its contents but also pure in its intention. With this type of diet, you eat straight from the earth, only as nature intended. I ate kale salad, raw nut butters, goji berries, raw chocolate, and dehydrated flax crackers. I drank green smoothies, green juice, wheatgrass, and hemp milk. I even tried a fruitarian diet . . . I thought about food from the moment I woke up until the second I fell asleep . . . I was an addict in search of the purest dope: raw, vegan, organic food . . . I was headed down a path of self-destruction. So it’s not surprising that, like any hardcore addict, I eventually hit rock bottom.”

So begins the saga of health blogger Kevin Gianni and his wife, Annmarie, as they travel the world to learn as much as they can about health and nutrition.  Along the way they meet unlikely people in unlikely places as Kevin seeks an answer to his burning question:  What—and how much—should we eat?

Gianni’s lighthearted debunking of the hype and nonsense surrounding much of the health and nutrition world today should be encouraging to anyone who’s ever tried a fad diet and failed. Kale and Coffee is packed with research—delivered in Gianni’s warm and humorous voice—but the aim throughout is to empower you to create the diet and lifestyle best suited to you alone.

Which diet and lifestyle will help us thrive? To me, it's like a jungle out there. There is so much conflicting information in the media. Not only are self-proclaimed experts always contradicting each other, but staple diets from the past are being given the old heave-ho. What are we supposed to do?

Kevin Gianni is a health blogger who made it his mission to ferret out the real deal on health and nutrition. His goal, as he states, was to 'find the people at the top of the misinformation chain and tie them up so they never confuse anyone again.' That made me curious enough to see how he would go. Hoping this book would clear everything up, here are some of the things I found interesting.

1) There is no one-fits-all human diet. We must all consider our own genetic lineage before we start messing around with other diets which suit people who have adapted to their cultures over thousands of years. Yet almost nobody alive in the western world today is a purebred human, coming from just one race. I'm a fourth or fifth generation Australian and already know I'm a mixture of Anglo Saxon, Germanic and probably others.

2) After just a few generations in a new place or with new habits, our genetic expression may change enough that our ideal diets needs to change too. That's the problem behind the philosophy of popular diets such as the Paleo. As we are actually worlds away from our paleolithic ancestors, it doesn't makes as much sense as it sounds to say that we should eat as they did. He visited animal breeders to help make this point, as changes can be observed over several generations of dogs or farm animals far quicker than with humans, yet the same thing happens.

3) Kevin Gianni tried some of the popular diets, including vegan and raw foods. Instead of filling him with energy and well-being, they mucked up his hormones and adrenal glands.

4) Many 21st century 'superfoods' which were unheard of a few decades ago (and we've all heard of many of them, think quinoa, chia, kale), are being pushed by those who market them, but the real indicator of health and longevity may be more about what we leave out of our diets rather than what we add in.

5) Many of us have been brainwashed into believing that exercise has to be hard and painful to be worthwhile. Over-training takes a serious toll on us, yet we all carry on. If our body is our planet, the way we approach fitness is like burning our precious fossil fuels. He believes that an ideal fat burning zone should be between 105 and 134 heartbeats per minute. That information actually changed how I ride my stationery bike. Instead of going flat out and pausing in the middle for a water and breath-catching break, I now easily go for a full half hour.

6) Emotional stress may mess with our health by stewing our organs in a cortisol broth. He urges us to consider stress a bigger threat to our health than french fries and fast food.

7) Technology may be changing the chemistry of our bodies. We are frequently rewarded by a dopamine fix when we see that people have liked or shared one of our social media posts, yet these feel-good chemicals aren't meant to be turned on continually and can harm us in excess.

8) He examines a lot of other interesting information too. For example, are sugar, carbs and gluten really the 'holy trinity' of disease that it's popular to think they are? He also looks at coffee, salt, alcohol and meat consumption. We need to read this with an awareness that all the information may not apply to us, depending on where we are from. For example, the Australian beef industry differs from the horrible situation he describes in which animals are fed bad stuff in small, enclosed spaces.  (He likens their diet to being forced to eat Twinkies out of your own toilet bowl. It fills me with compassion for the animals as well as convincing me of the benefits of free range produce.)

Overall, I'm not certain that Kevin Gianni's book did make things crystal clear, but it made it crystal clear why we can't expect them to.  It definitely inspired me to change a few things which I had no idea were an issue. It really gives us lots of food for thought about physical food in a very entertaining way.

Thanks to Hay House and Net Galley for my review copy.