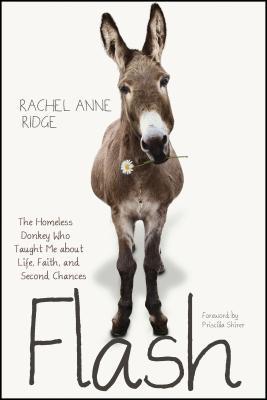 2015 Reading Challenge, Week 30 - A Book based entirely on its cover.
I couldn't resist the sweet little donkey face, and a read of the blurb made me curious to find out how he was going to become the hero of this family memoir.

The heartwarming tale of an irrepressible donkey who needed a home--and forever changed a family.Rachel Anne Ridge was at the end of her rope. The economy had crashed, taking her formerly thriving business along with it. She had been a successful artist, doing work she loved, but now she felt like a failure. How would her family pay their bills? What would the future hold? If only God would somehow let them know that everything was going to be all right . . . and then Flash the donkey showed up.If there is ever a good time to discover a wounded, frightened, bedraggled donkey standing in your driveway, this wasn't it. The local sheriff dismissed Flash as "worthless." But Rachel didn't believe that, and she couldn't turn him away. She brought Flash into her struggling family during their darkest hour--and he turned out to be the very thing they needed most. "Flash" is the true story of their adventures together in learning to love and trust; breaking down whatever fences stood in their way; and finding the strength, confidence, and faith to carry on. Prepare to fall in love with Flash: a quirky, unlikely hero with gigantic ears, a deafening bray, a personality as big as Texas, and a story you'll never forget.

MY THOUGHTS:
This is one of the best books I've read so far this year. My kids were asking me how I could be laughing one moment and crying the next. I think the story of Flash and the family who adopted him touched my heart with its blend of the simple and profound. Maybe it's because my family is at a similar stage to theirs, making the Ridges easy to relate to.

Rachel and Tom were struggling to keep their family afloat financially, working hard and spreading themselves too thin. They prayed for a sign of God's love, or at least some relief, and He sent them.... a stray donkey in the middle of their driveway. The likeliest explanation was that he'd been dumped by his previous owners. The sheriff told them donkeys didn't have much value. Too soft-hearted to get rid of him, the Ridges decided he'd at least make good yard art and a conversation piece.

Flash, the donkey, proved to be a pure blessing for their family, making a deep impression just by being his humble, plodding self. The blessing went both ways. It's great to think that even though Flash might have been regarded as unimportant by the world, God had His hand on him. Rachel and Tom's driveway turned out to be the best place he could have randomly found himself. I loved reading about the love and gentle treatment they showed him, instead of the harshness he seemed to expect, transforming him into a beloved family member who adored them in return.

Every chapter was a gem, but I'll mention just a few points.

Flash taught Rachel the gift of finding enough, even when times are lean. As donkeys have a knack for finding obscure food which others would walk past or turn their noses up at, his human family learned to relish the same. She realises that donkeys are prolific throughout scripture as critters who simply serve in their ordinary way, and that's all God expects us to do with our humble abilities. They see him break down barriers for his passion (which, in his case, involved fathering a little mule), and wonder why humans tend to lose heart more quickly. And his criss-crossed patterns of well-maintained trails encouraged them to keep faithfully plodding their own paths through life, which seemed to lead nowhere special. This is just scratching the surface of Flash's simple adventures.

Not only did Flash prove that his worth was more than surface deep, but now, every reader probably wants to go out and buy a donkey. I would if I could.

Thanks to NetGalley and Tyndale Publishers for my review copy.