'Brother and Sister' by Joanna Trollope 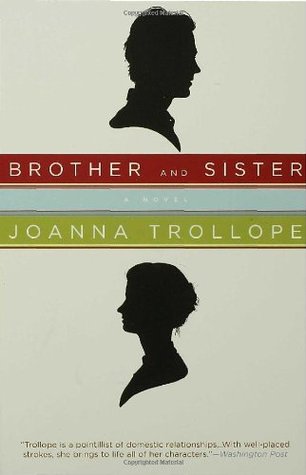 2015 Reading Challenge Week 7 - A Book you own but have never read.

I bought this novel from a second shop quite a long time ago and it's been sitting on my shelf. Since I've enjoyed another novel by Joanna Trollope, I thought it's time to take it down for a read, to fit this category of the challenge.

Brought up by the same parents, but born to two different mothers, Nathalie and David have grown up as brother and sister, and share a fierce loyalty. Their decision as adults to try to find their birth mothers is no straightforward matter. It affects, acutely and often painfully, their spouses and children, the people they work with, and, most poignantly, the two women who gave them up for adoption all those years ago. Exploring her subject with inimitable imagination and humanity, the celebrated author of Marrying the Mistress and The Rector's Wife once again works her magic.

Nathalie and David are the adopted children of Ralph and Lynne Dexter. Now in their 30s with families of their own, they decide to search for their birth mothers. It's easy to see why Joanna Trollope is such a well-known writer of domestic dramas. I feel if she were to discover the secret feelings of any of our families and households, she could probably spin a pretty interesting yarn, with the blends of personalities to be found beneath one roof.

I think another of Trollope's trademarks is giving every character a chance to have a scene written from their point of view, including not only Nathalie's five-year-Polly but David's two-year-old Petey. I was once told that authors should limit point of view characters to six at the most. This is definitely not a rule Trollope adheres to. I tried to think of a character in this novel who didn't get a point of view scene, and there were very few. For her, having so many works well. I think this is partly because it shows how our own lives may be impacted by the decisions of people who remain total strangers to us. To give just one example, David's antagonistic half-brother, Martin, never meets Nathalie, but unbeknown to him, it was Nathalie's idea and pressure which brought David into his life. There are many more such as these. It's interesting to think that ripple effects are often taking place in our lives.

It's interesting to see the number of people affected by the decisions of two people to delve into their pasts. The adopted siblings believe it has nothing to do with anyone but them, yet not only their birth families are affected, but their own spouses, children and adopted parents. Their partners, Steve and Marnie, take Nathalie and David by surprise with their reactions. And although it's never stated outright, it seems that neither of them ever forget that Nathalie and David are not really blood siblings at all. There's always an undercurrent of jealousy.

The other thing I noticed is that it's easy to fool ourselves into thinking something we really don't. Nathalie always convinced herself that she found being adopted liberating because she could forge her own path and wasn't bound by expectations based on her bloodline. However, it comes out that she really feels the lack of knowing her background and the hurt from wondering why her birth mother felt the need to give her away.

I was quite satisfied with the conclusions each of the siblings came to when they finally met their biological mothers.