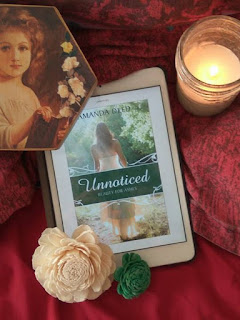 Plain Jane O'Reilly is good at being unnoticed. Detested by her stepmother and teased by her stepsisters, Jane has learned the art of avoiding attention. That is until Price Moreland, an American with big dreams, arrives in her small town.

Does she dare to hope someone might notice her?

However, Price Moreland may not be the prince that the whole town thinks him to be. Was his desire to be a missionary a God-given call, or just a good excuse to run from his past?

Complete with an evil stepmother, a missing shoe and a grand ball, Unnoticed takes the time-old Cinderella fairy tale and gives it an Australian twist.

MY THOUGHTS:
The author is one of my friends and co-authors of a novel I worked on, The Greenfield Legacy, so I was keen to start this new story.

I saved it to read as a treat, because that's what fairy tale adaptations are. Not many authors have attempted to set them in colonial Australia (well, as far as I know), but it's the perfect spot to see a familiar plot play out. Poor Miss Jane O'Reilly has lost her mother. She is shy and retiring, partly because her stepmother and stepsisters boss her around and pay her out, but mostly because she truly feels herself to be inferior. I'm sure you can guess the tale from that description.

There are all sorts of role reversals to make us smile. The 'ugly sisters' are actually quite pretty, while the poor heroine knows very well that her own nickname is 'Plain Jane.' She has such a fixed opinion about her own deficiencies, it never occurs to her that fresh eyes might regard her differently. My favourite detail is her embarrassingly huge feet, since the real Cinderella's always sounded ridiculously tiny. This version seems far more down to earth and real.

Price Moreland is the handsome American newcomer, who has set himself up as the town barber and dentist. It's reasonable that he'd attract the single women, but instead of taking the town's opinions on board, he has his own standards of what makes a girl beautiful. I'm glad he was a decent guy, because someone in his position needs lots of good character. He doesn't realise the depth of what he's taking on, since the person he falls for has such messy hang-ups after the way she's always been treated, yet it's all new to him.

In other words, Jane has baggage, and Price needs the maturity to understand and help her find a different way of seeing herself, all at the tender age of 26 (I figured out how old he was from clues in the story). Since traditional handsome princes don't always come across as sensitive, and willing to take someone else's load upon their shoulders I liked the depth it added to this story. He's more than just a dazzling smile and handsome face.

There's also some personal background of his own, since he left America to escape the racial tension of the Civil War, but finds out that it's everywhere, even on the Hay Plains. And he reflects himself on the impossible choice that faces him to either change his deepest principles or lose what he loves the most. The serious undercurrent this gives the novel seems to suit the Cinderella story.

It is quite lighthearted overall though, and I admit I sometimes begin adaptations of well known stories with a bit of trepidation. They can lose their suspense since we know what's coming. In this case though, I was interested to see how all elements could possibly come together, including the shoe, the fairy godmother, and the animal entourage. Jane's pets are actually quite a highlight of this story, headed by Moses the sulfur crested cockatoo. It's full of anticipation rather than predictability, and I'm sure anyone who appreciates the romance of fairy tales will love how it all comes together.

Finally, it's interesting to see what a visit to the dentist was like in colonial times, since I had a toothache of my own recently.