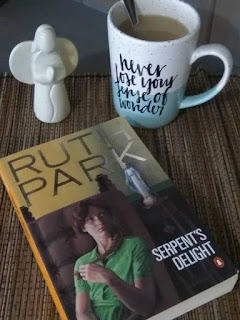 When Geraldine, youngest of the good-looking Pond sisters, announces that she has had a vision of the Blessed Virgin, her family is shot from its mundane middle-class existence into the glare of publicity. The once peaceful, closely knit family is suddenly full of mistrust and tensions.Serpent's Delight, a story of five women, each determined to get her own way, is a tender and perceptive study that highlights the irony of the human condition.

MY THOUGHTS:
This is an intriguing Aussie story which makes us wonder if we'll ever fathom what really happened. The Pond family are respectable, middle-class Catholics in Sydney. Then one day, Geraldine, the youngest daughter, claims to have had encounters with the Virgin Mary in the corner of their loungeroom.

Simple-hearted, faithful Ma is willing to believe that her teenager is a saint, but then repercussions from the news spread out to affect all the other members of the family. There's Carrie, the business women; Ivy, the nun; Elva, the exhausted mother of a huge brood; and all their children. And poor cheery, content Pa has his world turn crazy.

I love how Ruth Park gets into the heads of each family member with great depth and understanding, right down to the oldest, youngest and in-laws. She must have been a compassionate person herself, because I get the impression that she's fond of every single character, including those presented as less savoury. You can't help finishing with the sense that if all these quirky characters have their inner beauty, then so do the people we encounter during our day to day lives.

Alternating point of view is perfect for a book like this. The only person whose head we don't get to visit is Geraldine's, which is ironic since she's the crux of the story. Ironic but appropriate, because if we did know what she's thinking, we might be able to fathom the mystery of what really happened. Did she really see the Virgin Mary or didn't she? Geraldine certainly has the mystique of a closed book.

Ruth Park is like an alchemist who brings beauty out of the old, frayed and familiar. Her novels remind me of reading poetry. For example, one scene takes place on a rocky ledge over the Sydney Harbour. How's this for a line? 'That mighty cliff, the rampart of a continent, shook with a steady beat as the breakers crashed upon it. It was like lying upon the breast of a planet and hearing its heart.' That's from the point of view of Carrie's daughter Ann, one of my favourite characters. There are many similar instances when I just wanted to pause and drink in the word pictures.

A number of interesting questions are raised beyond theological ones. Should people be free to choose a life they think is a personal fit, rather than letting some self-imposed authority figure force them to do what they think will be best? Does the herd mentality turn harmless individuals into an unreasonable mob? 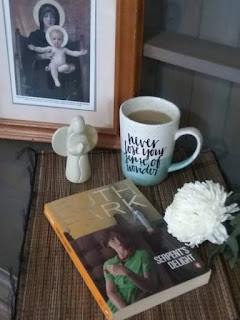 Although I really wanted to find out what would happen, some of the quotes gave me pause for thought as well as the descriptions.

Father Wheelwright (a young priest): You seem so shut in, Miss Pond. It isn't healthy for a young woman to be like that.
Geraldine: You don't make allowances for character, Father.

Cliff (Carrie's estranged husband): People aren't half as shocked at the four-letter words as they are at the three-letter words. Sin and God for instance. If you mention them in an ordinary conversation, people turn away uneasily as if you've said something obscene.
(Wow, he said that in the early twentieth century. Some things never change.)

My favourite a-ha moment was sandwiched in a conversation between the two eldest sisters, Carrie and Ivy.
Carrie: Are you happy, Ivy?
Ivy: No, but I'm content. And how about you?

They go on to probe into the difference between seeking either one or the other.  One is attainable, and even imparts serenity, while the other is an exhausting treadmill that leads nowhere. The intriguing Ivy had the common sense to realise this difference from a young age. I regarded her as one of the most fascinating characters all the way through. Although that comment could easily be glossed over, it came at a moment when I thought it was her secret.

Overall, my biggest problem was that some of the more minor characters were so great, I'd love to know what became of them. I guess that's a five star problem for any book to have. And does the story come to a conclusion? Do we find out what really happened in the Ponds' loungeroom? Whoa, yeah! I'm sure it'll shock different readers in different ways, depending on our own characters.