'A Piece of the World' by Christina Baker Kline 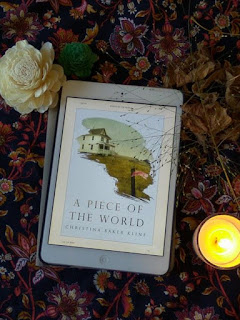 To Christina Olson, the entire world was her family’s remote farm in the small coastal town of Cushing, Maine. Born in the home her family had lived in for generations, and increasingly incapacitated by illness, Christina seemed destined for a small life. Instead, for more than twenty years, she was host and inspiration for the artist Andrew Wyeth, and became the subject of one of the best known American paintings of the twentieth century.As she did in her beloved smash bestseller Orphan Train, Christina Baker Kline interweaves fact and fiction in a powerful novel that illuminates a little-known part of America’s history. Bringing into focus the flesh-and-blood woman behind the portrait, she vividly imagines the life of a woman with a complicated relationship to her family and her past, and a special bond with one of our greatest modern artists.

MY THOUGHTS:
I loved this book. It's a fictionalised account of the life of Christina Olson, the subject of Andrew Wyeth's famous American painting 'Christina's World.' I'd seen images of this for years before I realised the subject suffered from a degenerative muscle condition which prevented her from walking properly. This story rings so true, I was willing to be drawn into its authenticity.

It weaves back and forth between the two world wars. There are flashbacks from Christina's youth in World War One, along with middle aged moments from the 1940s when she was friends with Andy Wyeth.

On the surface, the characters are nobody special. Just a family of battlers living a tough farming life in a cold climate, under fairly primitive conditions. But the young artist Wyeth recognised the austere beauty they embodied, and devoted a lot of time to bringing it forth in his canvases. I anticipated that the magic he saw would flow from the pages, and it sure did. 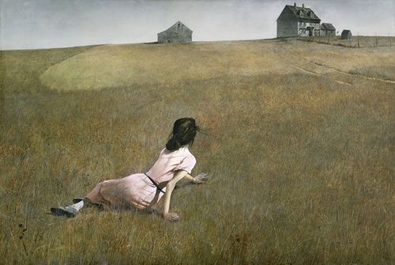 Christina's own voice, always in present tense, tells of the childhood illness her body never recovered from, her one experience of falling deeply in love, and her attitude toward her family and home. I like the snippy approach she uses with her brothers, although she loved them dearly. I found her so inspirational, because she never had aspirations to be famous or make a name for herself. Christina's idea of success was simply forcing her painful body to do what needed to be done around the house. The rare occasions when she allowed herself to dream other dreams (a teaching career and marriage) ended in disappointment. Yet still she carried on, noticing joy in small moments, shrugging off pity and doing her best with what she had. It's refreshing to have this sort of heroine, who simply reminds us to appreciate the basic goodness in our lives.

Her whole family is so vividly written, I could imagine them clearly. Although the stoic Christina was my inspiration, she wasn't quite my favourite character. That was her brother Alvaro, whose part of the story takes being taken for granted to a whole new level! He had such a warm heart, and just gave and gave. He was forced to relinquish dreams as much as his sister. Even more in a way, since he had the sound body to have followed his seafaring heart, if only he'd been free to do so. I'd recommend all ladies to read this book, to remind ourselves that there really are guys like him around. I wanted the best for him all the way through.

Christina comes across a bit prickly and cynical at times, but that's got to be a coping tool. She makes frequent wry observations that their whole lifestyle is one of privation and hardship. There's the fact that the whole family bathes on the 3rd Monday of each month, in the same water in the kitchen! Whoa, these guys sure didn't live sedentary lives, so you must've smelled them coming, even though the climate was chilly. She observes that when you live on a farm, everyone is uncomfortable for much of the time, and as for her own condition, 'The pain has become part of me. Just something I live with.'

I always jot down quotes that strike me as worth recording, and this book had several contenders for best.
Andy: Interesting, isn't it, what the mind is capable of? How the body can adapt if your mind refuses to be bowed.
Mamey (her grandmother): People have maladies of all kinds, and if they have any sense, they don't waste time whining about them.
Christina: No matter how long I hold a stick with fluttering rags above my head, no trawlers in the distance will be coming to my rescue.

But the winner is the good teacher, Mrs Crowley, who had this to say when Christina was forced to refuse her offer of further education.
Mrs Crowley: Your mind, your curiosity, will be your comfort.
I love that, because it's a good line for any one of us readers too.

Thanks to NetGalley and Harper Collins Australia for my review copy.