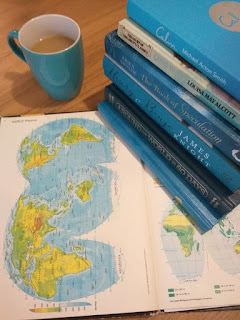 Since my marriage, one thing I missed about life with my parents was the occasional opportunity to travel to faraway places. We did a European bus tour when I was 15, taking in destinations around France, Switzerland, Germany and Italy. And I was able to travel around Britain with Mum and Dad in a hired campervan the year I turned 20. I still consider it a highlight of my life. How I'd love the chance to immerse myself in castles, cathedrals and fairy tale palaces again.

When she hears me say such things, my daughter tells me off. 'At least you did some overseas travel when you were our age. The boys and I have never even had that. You can't complain.'

I give her a similar response to the one Jerry gave Elaine on an episode of Seinfeld. During a packed and stuffy economy flight, one of the gang was given the chance to move up into first class. Elaine thought it should be her, since she'd never flown first class before. But Jerry nabbed the seat instead. His reasoning went something like this. 'It'd be worse for me to stay stuck in economy, because I've had a taste of what first class is like. Since you don't know what you're missing, economy is all the same to you.' When I tell my daughter it's the same for her regarding staying in Australia, she's not impressed :)

Another way of getting around my frustrated wanderlust is to remind myself that travelling isn't a holy grail. It's not everything in the world! (Well, in a literal sense it is, but you know what I mean.) There are a number of men in history and literature who found that travelling didn't hit their sweet spot at all. If anything, it made them more gloomy and sour than they already were. They would return home with secret desperation, because rushing all around the world hadn't been the magical elixir to help them escape their cranky selves. You know there's a saying, 'Wherever you go, there you are.' Well, here are my examples.

1) Archibald Craven (from The Secret Garden)
He'd lost his beloved pregnant wife in a freak accident and believed their son to be an incurable invalid. Craven couldn't stomach his Yorkshire mansion where it all took place, so left his young son with the servants and spent a fortune travelling abroad. Nobody looked forward to seeing his cantankerous face during brief visits home, which shows his attempt was unsuccessful. It seems no amount of pretty sights can change a self-focused and self-pitying attitude. It was the unexpected wisdom of three kids at home which finally achieved that. My review is here.

2) Edward Fairfax Rochester (from Jane Eyre)
The hero of this masterpiece had a similar scenario playing out in his head. Why would he want to stay home at Thornfield Hall, when it was full of bad old family memories and housed his feral, deranged wife? He spent lots of time across the Channel, where he dabbled in liaisons with foreign women. But indulging in wine, women and song didn't change his cynical outlook. A fateful return home did that, when he set eyes on the fresh, intriguing face of his new governess, whose serene manner stirred something in his heart. Then he couldn't get enough of being home. Here is my review.

3) Dean Priest (from Emily of New Moon, Emily Climbs and Emily's Quest)
He was a hunchback with a poor reputation among his own clan, which made him resentful and miserable, so he took off around the world. Young Emily loved receiving his exotic gifts from faraway locations. She thought Dean had everything a person could desire, but it turns out all he wanted was her. Denied the love of a young girl in his home town, all the travel meant nothing to him.

4) Laurie Lawrence (from Little Women)
Here's another lovesick gentleman who travel didn't really cure. He was pining his heart out because Jo March declined his romantic advances, so his grandfather offered to send him on a trip to Europe. Laurie knew he'd be silly to refuse such a generous offer, but Amy's sharp pencil proved that exotic places weren't the medicine the old man had intended for the boy. Her sketches showed that Laurie was still miserable over Jo. Amy's presence turned out to be what he needed, which he could have got at home. Reviews are  here and here.

5) Macon Leary (from The Accidental Tourist)
This Anne Tyler novel was later made into a movie, and I enjoyed both. Macon hates his job writing travel guides, even though they're tailored specifically for grouches like himself who hate travelling. But his family life has disintegrated, since he lost his teenage son and separated from his wife, so he knows he must fill his days doing something. His introduction to a quirky young woman named Muriel, who looks after his dog, provides the boost of new life he needs.

6) Phileas Fogg (from Around the World in 80 Days)
He deserves his place on this list because even though he set out on a lavish trip around the world, it wasn't with an excited, curious sense of wonder. He wasn't remotely interested in what it had to offer. His terse focus was entirely on winning a bet that he could circle the globe within eighty days. Sightseeing was a distraction he couldn't be bothered with, so he often closed the blinds of whatever conveyance he was in and played cards to wile away the time. My review is here.

7) Lorens Lowenhielm (from Babette's Feast)
This decorated and celebrated hero was one of the guests at a local dinner. He felt depressed and empty precisely because he'd travelled the world and nothing it offered had lifted his low spirits. Lorens thought everyone was just humouring his hostesses' maid, who was throwing the big feast. The shock and surprise of her bountiful generosity, when he realised her identity, achieved what no voyage had managed to do. It helped him understand that there was still grace and beauty in the world. And once again, it was geographically close to his starting point. Here is my review.

8) King Solomon
He was perhaps the ultimate discontented wanderer, and spilled his disillusionment out in the Book of Proverbs. It took sampling all the world's bounty to prove that it couldn't fill an empty spot deep inside. Only one thing could, which he came to see was available to anyone, anywhere. And people have been quoting his discovery for centuries.

So there we have them. In one sense, you may feel like shaking some gratitude into their heads and saying, 'Give me the opportunity to be where you've been instead!' But they're refreshing in their own way, because through them, we understand that we really don't have to travel far from home for what matters most. And that's wonderful news for those of us who can't afford to travel far from home. Perhaps they can help shake gratitude into our heads. You could read their stories in a marathon 'grouchy tourist' session, if you can stand their morose company for that long.

While I compiled this list, I also noticed the opposite side of the coin, Contented Prisoners. They are the people who are trapped in a very small location and can't go anywhere, but haven't let it hurt their good spirits. Taken both together, I've found the characters have a lot to teach us.