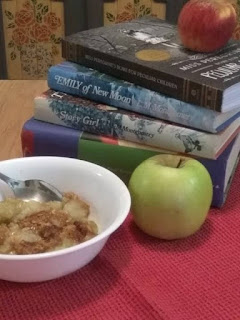 The apple used to come across as a fairly ordinary fruit to me. Whenever I found one in my school lunch box, I'd grumble because my mother couldn't think of anything better. But is the humble apple really so humble? I've been wondering because we've had plenty just recently. The apple crumble in the photo is something I cooked. I also noticed that National Apple Pie Day is coming up in the USA. Has any other fruit been so immortalised in stories and legends? They keep popping up in history and literature, so I set myself the challenge of creating an Apple Hall of Fame. There are no animated characters on my list, but actual real apples, which just happened to become famous. I set myself the goal of coming up with ten. Here goes.

The Garden of Eden
We all know what happened here. This was the object the crafty serpent used to plunge the human race into a state of sin. He tempted Eve to take a bite, she caved in and gave some to her husband too, even though God had ordered them not to touch it. It was a significant piece of fruit indeed. The Bible doesn't specifically call it an apple, and theories abound that it was more likely to be something else. Some people guess pomegranate, apricot or date, but I'm going with western European tradition here.

Sir Isaac Newton
The legend goes that he was snoozing beneath his mother's apple tree when one fell down and hit him on the head. In a flash of brilliance, young Isaac came up with the theory of gravity. 'Hmmm, now why didn't that fly to the side or up in the air? I reckon there must be some sort of drawing power in the earth's matter.' That might sound like an obvious conclusion to us, but the famous apple earned its place in science.

William Tell
He was a Swiss national folk hero from the early 1300s. As a political protester, Tell was sentenced to execution for refusing to support the Habsburg Empire. He was told he could avoid his fate by passing a cruel test. He could go free if he could shoot an apple off the top of his son's head in the very first attempt. Tell was up for the challenge, and split that apple neatly in half. That must be one of the best sliced apples in history.

(To my surprise, there's actually a Wiki entry entitled 'Shooting an apple off one's child's head'. Apparently the feat occurs in a number of Germanic legends. It's even named 'The Apple Shot.' William Tell simply made it most famous.)

Prince Caspian
On the subject of excellent marksmen, a great archery contest took place in Narnia between Queen Susan and Trumpkin the Dwarf. He'd been looking down his nose at the four children, so they decided to teach him a lesson. Susan chose the target. It was a distant apple hanging over a wall, which poor Trumpkin thought looked more like a cherry from so far away. Nevertheless, he gave it his best shot and got the leaves shaking. Then Susan straightaway pierced right through its middle, knocking it to the ground. And talking of Narnian apples, the Pevensie siblings relied on them a lot during this story for their staple diet. I would have found it a bit monotonous. 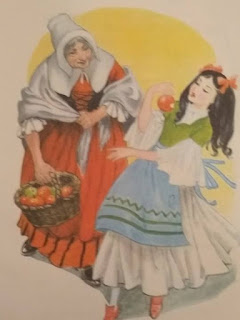 Snow White
Her wicked stepmother chose her apple seller's disguise with great cunning. She predicted the young girl's weakness for the shiny, crisp, juicy fruit, and decided to choose a real beauty. And all so that she could knock out her rival and be the fairest in the land. It turned out to be a very easy lure indeed. Luckily for Snow White, the poison in that apple was no match for true love's kiss.

Emily of New Moon
Talking about poisoned apples, this young heroine was duped by a nasty next door neighbour. Emily had just finished eating a delicious apple from Lofty John's barn, when he arrived home and told her he'd poisoned it for the rats! Not a nice trick to play on a sensitive young girl. Poor Emily suffered a lot over that apple.

The Story Girl
Lucy Maud Montgomery must have liked her apples. In this novel, the gang of cousins have a competition with sour apples from a particular tree. The winner is the person who manages to eat one down to its core without pulling a face, but Peter and Felix get a bit too intense. These are funny stories and well worth a read.

The Arabian Nights
In the story entitled Prince Ahmed and the Fairy, the young man is given the chance to purchase a remarkable apple with amazing healing powers. Anybody close to death may be instantly cured by a mere sniff of the apple. You don't even need to take a bite. It's quite the opposite to the poisoned apple stories.

The Great Divorce
C.S. Lewis' classic parable about heaven is full of characters who can't relinquish the idols and ambitions which captured their hearts on earth. A businessman named Ikey is determined to take some produce from heaven back to the grey city which represents hell, to make a killing. He doesn't realise that's it's almost impossible for ephemeral people such as him to lift anything. He grapples with a single fallen apple, using every ounce of his strength until he actually manages to drag it away. It never occurs to him to give up the effort, and remain to enjoy paradise instead.

Little Women
Apples seemed to be the favourite fruit of many literary minded young heroines. Jo March liked to take a pan of russets up to the garret with her and chomp through them while she was writing stories. She had the company of Scrabble the rat, to whom she fed the cores. Sounds like a good arrangement. My review is here.

Miss Peregrine's Peculiar Children
This was an interesting apple, because it first alerted Jacob Portman that something odd was happening with the time loop at Cairngorm House. One night, Emma Bloom gave him a delicious, rosy apple, which he decided to save by the side of his bed. But when he woke up in the morning, a shrunken, withered husk waited for him. She'd given him the apple in her time, which was September 3rd, 1940. Jacob had on his hands a 75-year-old apple. My review is here.

Harry Potter series
I couldn't help laughing when I came across this Popsugar link to Drapple, the only Harry Potter romantic pairing some people claim they will ship. If you want a bit of a giggle or groan, check it out. But seriously, Draco does appear with an apple in a couple of scenes, including an important one in which he's trying to repair the Vanishing Cabinet at Hogwarts, to enable the Death Eaters to enter the premises from the twin cabinet at Borgin and Burkes. Even though he succeeds, you can't help feeling very sorry for him at this point, for the way he was forced into making it happen.

Hooray, I made it over ten, and they come from sources far and wide. That's not even counting apples from famous sayings (He's the apple of my eye, An apple a day keeps the doctor away, The apple never falls far from the tree.) And it doesn't count more modern success stories, such as the apple Steve Jobs was munching when he got the inspiration for his company's name. Even though other fruits may seem to be showier with higher profiles, I guess that when it comes to stories, the modest apple will always sneak to the top. I guess that's appropriate, since bookworms are said to live in apples.

And now that I've thought of all these, I'll extend my usual invitation, of course. If you can think of any others, do mention them in the comments.
Posted by Paula Vince at 5:00 AM