'The Hound of the Baskervilles' by Sir Arthur Conan Doyle 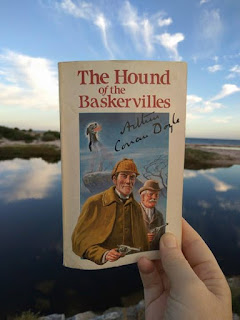 Holmes and Watson are faced with their most terrifying case yet. The legend of the devil-beast that haunts the moors around the Baskerville family's home warns the descendants of that ancient clan never to venture out in those dark hours when the power of evil is exalted. Now, the most recent Baskerville, Sir Charles, is dead and the footprints of a giant hound have been found near his body. Will the new heir meet the same fate?

MY THOUGHTS:
I've chosen this title for my classic about an animal category in the 2017 Back to the Classics challenge. It can either have the name of animal in the title, or include an animal in the actual story. This one has both, and a very fierce, nasty beast it is. It's one of the longest and most famous Sherlock Holmes adventures. Many of them are short stories, but this one is novel length, and is also a movie.

The Baskerville family is rumoured to be cursed on their own turf. For generations, they've supposedly been stalked by the ghost of a huge, black, fire-breathing dog, and several of them have suffered sudden, violent deaths. The latest victim, Sir Charles Baskerville, has been discovered dead on the grounds of his estate, near a huge paw print.

Henry Baskerville is the young baronet next in line to inherit the Hall. He's been living abroad for several years and isn't up-to-date with the family legend. They've congratulated him for his good fortune, but neglected to tell him that it might turn out to be bad fortune. His friend, Dr James Mortimer, consults Holmes and Watson on Henry's behalf, just in case there are any grounds to believe the old superstition or suspect foul play in Sir Charles' death. 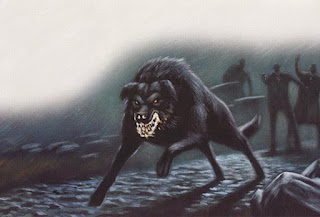 The story is rife with clues that there's far more to the mystery than meets the eye. Weird warning letters, inexplicable footwear theft, people being trailed, servants behaving suspiciously and women crying. The melancholic Dartmoor setting stirs up the creepy atmosphere. There's plenty of fog and gloom, and miry bog holes with the potential to suck men and beasts to their death. And every so often, the spooky hound gives a mournful howl, just to remind people that he's around.

The locals all appear friendly, but is anyone hiding anything? There's Mr Frankland, an elderly political agitator, Stapleton, the young naturalist, and his beautiful, but troubled sister. And just to add to the tension, a desperate criminal who's escaped from prison is also believed to be roaming the moors.

Sherlock Holmes has to be one of the smuggest know-it-all's in literature. All his compliments to poor Watson tend to be back-handed ones. For example, he tells him that although he's clueless, he has a happy knack of stimulating Holmes' own genius. And he never communicates his full plans to anyone until he decides the moment is right, just in case the lesser mortals stuff it up. This includes Watson, who says, 'It's very trying to those acting as his agents and assistants.' In fairness to Holmes though, Watson, who narrates the whole story, does seem to have a bull in a china shop approach to solving mysteries.

But whoa, for such a genius, Sherlock Holmes almost blows everything himself. Talk about saving the day in the nick of time! 'You'll be completely safe,' he warns somebody at one point, but what happens isn't what I'd call keeping his promise. His 'completely safe' is definitely different to my 'completely safe.' I found the plot stretched my belief at times, including the fact that the crook is able to get away with hiding some pretty big evidence.

It's a fairly easy read, and if you like it, the other Sherlock Holmes stories are much the same. They aren't what you'd call deep. I get the feeling they were the sorts of popular stories written to please the demands of an audience who knew exactly what style of dramatic twists and special effects they wanted. It's a pretty formulaic detective story, overall, and I'm sure Sir Arthur Conan Doyle would have agreed, 'Yeah, isn't that great?' After all, he helped create the formula, and would have laughed all the way to the bank.

I've mentioned more about the Holmes/Watson relationship in this post about great bromances.
Posted by Paula Vince at 5:00 AM