'Anne with an E' - Imagination is Crucial 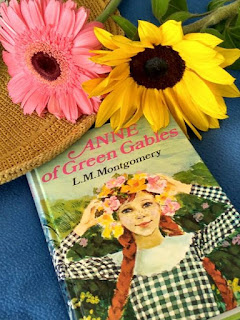 Rewind back to 1985. I was a fifteen-year-old waiting one night, with my hot drink, rug and pillow, for the new Anne of Green Gables mini series to begin. And was it fun! We all loved watching Megan Follows, Jonathan Crombie and Co do what they did best, and bring nineteenth century Prince Edward Island to life. I sensed a lot of curiosity, and also quite a bit of scepticism and fear, that the new Netflix production could never live up to it. So I sat down with a hot drink, rug and pillow again, with my own teenage daughter beside me. I'd decided to go in with an open mind. And what I saw blew me away.

It's definitely an edgier and darker re-telling of the classic, including flashbacks to Anne's unhappy past with the Hammonds, who treated her cruelly and made her do drudge work. Her inevitable PTSD is featured strongly. It's made clear that she lived her earliest childhood years with no loving care or input from sympathetic adults. It's quite natural that Anne would have no concept of polite social mores, blurting out her observations about adult themes which landed her in a spot of trouble. Other messy aspects of life are put forward too. Anne deals with the shock of her first period, Matthew sinks into depression and considers suicide at one point when he feels rock bottom, Marilla is given more space to regret her lost love, and we even get a glimpse of a paedophile hanging out in a railway station.

I do understand why some true Anne traditionalists believe that we don't need all these extra bits. Let Anne remain an innocent and beautiful icon of our childhood, they argue. There's no need to drag the more sordid and adult facts of life into everything. Some things deserve to remain pure and sweet. Let Lucy Maud Montgomery's world stay an oasis we can escape to, where flower beds and wild fruit are everywhere. We expect sweetness and light, and shouldn't have to fear knocking into rougher aspects. Isn't there enough of that in our own daily grind? And don't our kids deserve not to grow up too soon? Being an escapist reader from way back, I do understand that line of thought. But I don't agree with it. Rather than sullying our beloved Anne stories, this series has enriched them for me, by bringing out multi-layers of hidden depth. And it  proves Anne to be an even more poignant and admirable character than she seemed before. Her powerful imagination was always one of her trademarks. This new series shows why it was so vital to her. It was her rock and her source of strength. After all she'd been through, Matthew and Marilla Cuthbert still met a generous, sweet-spirited girl whose heart responded to the beautiful and good. I'm convinced that she might have been completely different without the aid of that wonderful imagination. Anne had plenty of practice using it. Her ability to phase out of a dramatic or sordid scene to visit a place of her own wishful invention was a healthy coping tool. It wasn't denial, living in a fairy tale world or other dismissive things people say. Nor was it just a fun, quirky character trait, as we may assume if we never see beyond Anne as a sweet kids' story. Her imagination was her life-preserver, which enabled her personality to remain intact when it might otherwise have been completely broken.

The young Anne probably didn't consciously realise what a wonderful gift she possessed. When she said that she used her imagination to improve upon reality, she probably had no clue that she was speaking great wisdom. I believe she knew intuitively, since she dismissed Marilla's apparently sound advice that it's pointless to imagine that things are different to how they are. Although decades younger than Marilla, she'd already figured out through experience that the older lady's advice was limited.

People with imagination can transform what's around them, so they are actually living a more positive existence than people who refuse to see beyond what's right in front of them. Do you remember what she said about her first experience of Green Gables? 'This is the first time I've never had to imagine that things are better.' Remarks like this are one reason why Anne Shirley is on of my most admired female characters in literature.

Perhaps this series is designed to appeal to a younger generation, which is a good thing. And our younger generation strike me as a wise, insightful crowd who don't appreciate efforts to keep the world sterile anyway. My daughter laughed when she saw people refer to the 'darkness' as she considers it one of the least dark series she's watched for ages. 'Move over Game of Thrones, here's Anne with an E.' But rather than letting her finish with the last word, I'll give that honour to the Cheshire Cat from Alice in Wonderland, who summed up Anne's philosophy when he said, 'Imagination is the only weapon in the war against reality.' Hear hear.

There are also many other things I found to love in the new series. The authenticity of the time period and characterisation are spot-on. The new actress, Amybeth McNulty, seemed tailor made to fit L.M. Montgomery's century old description. Geraldine James nailed the matter-of-fact, but warm hearted character of Marilla, and Corrine Koslo gave Mrs Rachel Lynde a lovable face. And young Lucas Jade Zumann was an awesome Gilbert Blythe, with that timeless quality of fitting into the role as well as appealing to modern viewers. I know I'm really opening myself up here, but after watching it all through, I even prefer this version to Megan and Jonathan. Bring on Season 2.

Or this one, where I discuss my favourite L.M. Montgomery hero.

If you've seen both TV series, which do you prefer? Or if you haven't seen this new one, do you intend to?
Posted by Paula Vince at 5:00 AM