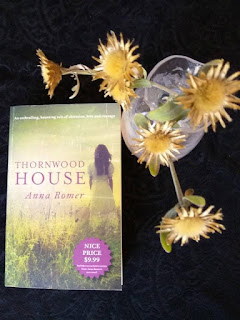 When you're all that stands between the murderous past and the fate of those you love, how far would you go to save them?
When Audrey Kepler inherits an abandoned homestead in rural Queensland, she jumps at the chance to escape her loveless existence in the city and make a fresh start. In a dusty back room of the old house, she discovers the crumbling photo of a handsome World War II medic - Samuel Riordan, the homestead's former occupant - and soon finds herself becoming obsessed with him. But as Audrey digs deeper into Samuel's story, she discovers he was accused of bashing to death a young woman on his return from the war in 1946. When she learns about other unexplained deaths in recent years - one of them a young woman with injuries echoing those of the first victim - she begins to suspect that the killer is still very much alive. And now Audrey, thanks to her need to uncover the past, has provided him with good reason to want to kill again.

I saw this book included on a list of Australia' top 100 novels, and then saw it for sale at K-Mart for a reasonable price. It was enough to get me interested to read it.

There's quite an eerie, wistful, nostalgic quality about Anna Romer's writing. So many celebrated Gothic novels belong in nineteenth century Britain or Europe, so I was really pleased to see an author make it work just as well in modern rural Australia. When the main character, Audrey, gets to Thornwood House, she reflects, 'The past seemed to ooze from the stains on the walls, to seep up through the floorboards, and whisper from the crack in the wardrobe door.' That's a nice way to set the scene.

Audrey Kepler is a young, single mother who's just heard about the death of her ex, her daughter's father Tony. He died under mysterious circumstances and willed them his ancestral family home in the Queensland bush. It's an offer too good to refuse, but Audrey soon finds herself drawn into three generations of unsolved murder mysteries.

Tony's grandfather, Samuel, was accused of brutally murdering his fiance. Audrey doesn't want to believe it, because his photograph is so handsome and compelling. And it turns out Tony had a sister who also died under tragic circumstances. Although Audrey isn't a direct descendant of the clan, her daughter Bronwyn is, which gives her the creeps.

It's obvious that if the killer spanned three generations of a family line, he'd have to have some huge vendetta and be pretty old. The big revelation is the only one which could have made sense in the time frame, but I found it impossible to accept emotionally. The murder of one victim in particular would make him a far more depraved monster than he's presented. My feelings just shut down and said, 'Nope, I can't accept that's possible,' given the relationship between the two of them. My credibility was stretched so thin it snapped.

And Audrey is so outrageously nosy! Sure, you might argue she has good reason to be, since her only child is related by blood to the scary clan and it's just her maternal instinct. I get that, but she's like a sticky beak sitcom character, sneaking around peeping into the drawers and cupboards of brand new acquaintances. 'Tony grew bored with my constant probing,' she says in one of her reflective moments, and I had to laugh. Yes, I understand why he'd want to get away from her. 'Had he known that I would, by my very nature, be curious about the past?' Whoa, curious is an understatement. You've got to read about her to believe her.

Another interesting fact is that Audrey's new boyfriend, Danny, is deaf. He rarely talks and everyone communicates with him using scribbled notes and sign language. I was expecting his deafness to become a plot device, such as having a noisy crime committed nearby, which he's unable to hear. But it turns out no, there's no literary purpose for his deafness. It's just him. Well, why not? Since people in real life have physical disabilities without any deep and meaningful thematic reason, why not fictional characters? But it got me thinking how in stories, it's easy to assume that every detail is written to be significant. I kept waiting to find out how his condition was going to matter. When it didn't matter at all, I was a bit surprised.

Overall, it was an interesting enough book to finish, and deserves its label of Gothic, but left me feeling a bit let down at the end, because there's a fair bit of long-winded detail about all sorts of things for no apparent reason. Danny's deafness is only one example. The carnivorous plants grown in Bronwyn's granny's greenhouse spring to mind too. If they weren't intended to have any bearing on the story, then why give readers an enforced horticulture lesson? There's also Audrey's weird dreams when she feels at one with Samuel's fiance, Aylish. They were confusing, and seemed ultimately pointless. Should this book be included in the list of Australia's top 100 books? I'm just not convinced it should.