'The Chocolate Tin' by Fiona McIntosh 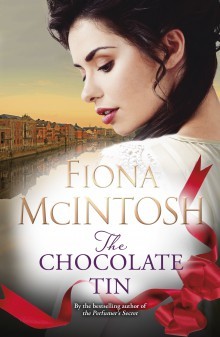 The highly anticipated, sensuous new blockbuster by the beloved, bestselling author of The Perfumer's Secret.

Alexandra Frobisher is a modern-thinking woman with hopes of a career in England's famous chocolate-making town of York. She has received several proposals of marriage, although none of them promises that elusive extra – love.

Matthew Britten-Jones is a man of charm and strong social standing. He impresses Alex and her parents with his wit and intelligence, but would an amicable union be enough for a fulfilling life together?

At the end of the war, Captain Harry Blakeney discovers a dead soldier in a trench in France. In the man's possession is a secret love note, tucked inside a tin of chocolate that had been sent to the soldiers as a gift from the people back home.

In pursuit of the author of this mysterious message, Harry travels to Rowntree's chocolate factory in England's north, where his life becomes inextricably bound with Alexandra and Matthew's. Only together will they be able to unlock secrets of the past and offer each other the greatest gift for the future.

From the battlefields of northern France to the medieval city of York, this is a heartbreaking tale about a triangle of love in all its forms and a story about the bittersweet taste of life . . . and of chocolate.

MY THOUGHTS:
I went to hear the author, Fiona MacIntosh talk about the writing of this novel at our local library just before Christmas, and bought a copy. I couldn't wait to get stuck into it. Sadly, I struggled to keep my interest level up enough to finish it, and I'll try to explain why.

In Britain, the Rowntree family organised a shipment of King's Chocolate tins as Christmas gifts for soldiers in the trenches to keep up their morale. Alexandra Frobisher and Matthew Britten-Jones have agreed on a marriage of convenience to get their nagging parents off their backs, and she volunteers as a tour guide and packer at the Rowntree factory in her spare time. One day, Alex makes an impulsive, random addition to one of the tins, which comes back to bite her a few years later.

I really wanted to enjoy this, but the whole romantic element moved way too fast for my sympathy and interest level to keep up with. Harry and Alex seemed to be devoted to each other within a twenty-four hour period. No, actually it was within the one hour period in which she guided him through the factory. That kept the whole thing a bit shallow. I think was meant to come across as intense and romantic, but the whizzing time frame just made them seem reckless and impulsive.

As for the main men themselves - I dunno. Harry made a great initial impression on me, being so thoughtful of others, but then undid it by flirting so blatantly with a married woman the day he met her. That's not even good taste in our time, let alone the prim and proper World War One era. And Matthew seemed to pop in and out of the story like a ghost. Now you see him, now you don't. Sadly, I found the man with the most potential was Tom, who was killed after just a couple of pages.

It is an easy, flowing read, the sort of book where you can get through 100 pages in half an hour, then look at the chunk and wonder, 'What actually happened?' There's a fair bit of sparkling small talk and waffling descriptions about history.

What I did find quite interesting is the description of the Rowntree factory. Any chocolate making I do in my kitchen involves melting down a packet of Nestle or Cadbury buttons, so it was enjoyable to read about the whole process starting with the cocoa beans. I think it would have been nice to have a photo of the actual tin somewhere on the cover, since it was the crux of the whole story. There are still some around, since McIntosh saw one as her inspiration.

Altogether, although this story did make me feel like chocolate, it was disappointingly not my cup of tea, even though I enjoyed Fiona McIntosh's presentation immensely.